Jupiter's iconic Great Red Spot may extend even deeper into the planet's atmosphere than scientists thought.

NASA's Juno spacecraft zipped past the Great Red Spot – an anticyclone large enough to swallow Earth – twice in 2019. Measurements from those flights are now revealing the storm's structure in far more detail than telescope images can show. That data suggests that the vortex probably extends anywhere from 186 to 310 miles deep (200 to 500 kilometers) – far below Jupiter's clouds.

The Juno probe has been circling Jupiter, flying past its poles and even some of its moons, for the last five years. Prior to its latest visits to the Great Red Spot, the spacecraft hadn't flown past the giant storm since July 2017.

Back then, Juno's measurements indicated that the vortex extended about 200 miles (322km) into Jupiter's atmosphere. That was an astonishing depth to scientists at the time – it's about 50 to 100 times deeper than Earth's oceans. But now, Juno's latest flybys have revealed that the storm may extend far further down than that.

"That means it's a gigantic storm," Yohai Kaspi, a Juno researcher at the Weizmann Institute of Science in Israel, told The Verge. "If you would put this storm on Earth, it would extend all the way to the space station. So it's just a monster."

Above: Animated Great Red Spot based on velocity data from Juno and wind modelling.

The researchers published their findings in the journal Science on Thursday.

Mysteriously, the jet streams surrounding the Great Red Spot extend even deeper – nearly 1,900 miles (about 3,000 km) below Jupiter's cloud surface. The researchers aren't sure why.

They do know, however, that those jets – distinct bands of gas wrapping around the planet – are keeping the Great Red Spot alive. The storm is wedged between two jet streams that move in opposite directions, powering the spin of the vortex. 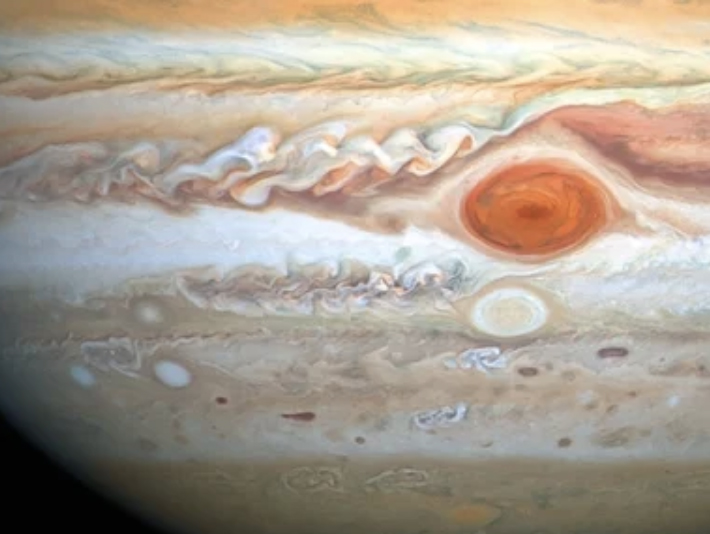 "It's surprising that [the Great Red Spot] goes so deep… but it's also surprising that it doesn't go as deep as the jets," Marzia Parisi, a Juno scientist at NASA's Jet Propulsion Laboratory, told The Verge.

"So something is happening at 500 kilometers that is basically dampening the Great Red Spot."

The Great Red Spot is constantly changing. It has been shrinking and becoming more circular since astronomers began observing it about 150 years ago. Just last month, another group of scientists discovered that winds in the cyclone's outer band have sped up over the last decade, while its inner regions have slowed.

Measurements from NASA's Hubble Space Telescope have indicated that the Great Red Spot is getting taller as it shrinks.

Some scientists have suggested the storm will collapse and disappear in just a few decades due to its shrinking size, but other researchers disagree.

For its part, Juno is set to continue orbiting and studying Jupiter for another four years.