The Building Blocks of Life Are Left-Handed, and The Reason Could Come From Deep Space

If you've ever looked carefully at the snails in your garden, you may have noticed a curious quirk. Most of their shells spiral in the same direction. Every now and again, you might find one going the other way, but the odd ones out are extremely rare.

This structural mirroring is a phenomenon known as chirality, or handedness, and it can be found in molecules, too. Just like snail shells, they too are heavily weighted towards one direction or another - what is known as homochirality.

It's thought that chirality might be a requirement for the emergence of life, but we don't know how or why it happened in the first place. If you create amino acids and sugars in a lab, you'll get a pretty even mix of sinistral and dextral forms of both. So why should biomolecules be homochiral?

Well, there's one place you might not think to look. And two scientists have now fleshed out a potential explanation that suggests life was shaped by powerful forces from outer space.

More specifically, the bombardment of Earth's atmosphere by cosmic rays, radiation in the form of high-energy particles such as atomic nuclei and protons that constantly stream through the galaxy at close to the speed of light. 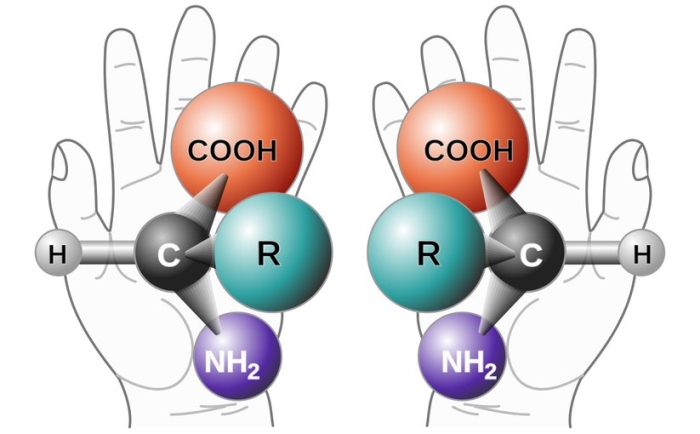 "We propose that the biological handedness we witness now on Earth is due to evolution amidst magnetically polarised radiation, where a tiny difference in the mutation rate may have promoted the evolution of DNA-based life, rather than its mirror image," explained high-energy astrophysicist Noémie Globus, who was a visiting scholar at Stanford University's Kavli Institute for Particle Astrophysics and Cosmology at the time of the research.

Cosmic radiation - just like other forms of radiation - increases the cellular mutation rate of living organisms. Here on Earth, we're relatively protected by the atmosphere and magnetic field. (And it's why astronauts are at an increased cancer risk in space.)

Our planet's magnetic field deflects a lot of cosmic radiation; what doesn't get deflected, decays into fundamental particles when it hits the atmosphere. By the time these reach the ground, most cosmic radiation exists only in the form of muons - elementary particles similar to electrons.

Muons have a longer lifespan than many elementary particles - 2.2 microseconds, on average. Because they travel at close to the speed of light, they can zoom a few hundred metres below the surface of Earth before decaying into electrons. They, and therefore the electrons they decay into, are also magnetically polarised in the same direction.

This doesn't affect current lifeforms much at all. But early life, when it was just emerging as self-replicating molecules, would have been a lot more vulnerable than we are now, according to the researchers.

They propose that these early molecules looked a lot more like those created in labs - a healthy mix of both chiral forms. But the constant, global bombardment of magnetically polarised muons could have induced a very small, but very persistent chiral bias.

Over time - a lot of time, billions of generations - this influence could have seen one chiral form first start to overtake, then dominate, leaving fewer and fewer of the other form.

"This is a little bit like a roulette wheel in Vegas, where you might engineer a slight preference for the red pockets, rather than the black pockets," said theoretical astrophysicist Roger Blandford of Stanford University.

"Play a few games, you would never notice. But if you play with this roulette wheel for many years, those who bet habitually on red will make money and those who bet on black will lose and go away."

Now, we can't exactly nip back a few billion years and go check. But there are ways we could see if the general concept is at least sound. We could, for instance, bathe bacteria in magnetically polarised radiation, and measure the mutation rate. This could tell us if the polarisation can in fact induce a chiral bias.

And if it does, that means that the homochirality that plays such a significant role in life may not be - as some have thought - unique to Earth, since cosmic rays are ubiquitous throughout the Universe. Meaning, in turn, that what could be a requirement for life can also be found on other planets.