Back in 1976, the late Carl Sagan sat down on the Tonight Show with Johnny Carson to talk about a new form of space propulsion called solar sailing. Four decades later, and The Planetary Society has officially demonstrated this "tremendously exciting prospect" in practice.

Drawing on ten years of hard work and 7 million dollars in crowdfunding, the nonprofit Society's LightSail 2 has become the first small spacecraft to raise its orbit solely on the power of sunlight.

"Our criteria was to demonstrate controlled solar sailing in a CubeSat by changing the spacecraft's orbit using only the light pressure of the Sun, something that's never been done before."

The LightSail 2 spacecraft has been up in orbit for over a month, and last week, it opened its sails for the first time. In the eight days or so since, the spacecraft has raised its orbit by 1.7 kilometres, pushed along solely by the Sun's photons, which 'bounce off' its reflective sails.

Following Japan's IKAROS solar sail, which was launched in 2010, LightSail 2 is only the second-ever successful attempt at solar flying. Yet unlike IKAROS, it can use this new form of propulsion to actually change its orbit.

According to project manager Dave Spencer, LightSail 2 is being controlled autonomously by an on-board algorithm. By twisting the spacecraft 90 degrees every 50 minutes, this software can alter the craft's orientation, so that it gets enough energy from the Sun no matter where it is. IKAROS, in comparison, could only turn about four or five degrees.

This impressive algorithm is still being updated and tweaked. One of the biggest challenges so far has been refining the spacecraft's momentum, which is controlled by a spinning wheel.

This momentum wheel is used to change the craft's orientation so that it turns the thrust from solar sailing on and off. When the wheel starts approaching maximum speed, which it does a couple times per day, it needs to be slowed down.

This is currently done using electromagnetic torque rods, which orient the spacecraft using Earth's magnetic field. Unfortunately, this temporarily takes the spacecraft out of its proper orientation for solar sailing, so scientists are still trying to figure out how to reduce these saturation points as much as possible. A software patch for this very issue was uploaded today.

"We are learning a lot from LightSail 2 right now," said Bill Nye, the CEO of The Planetary Society, during a recent press conference.

"In other words, although we've declared mission success, and we did this thing that we have been hoping to do for - depending on how you reckon - 42 years, LightSail 2 will fly for almost another year… We are going to learn a lot about controlling the spacecraft and the performance of the sails in the next few months." 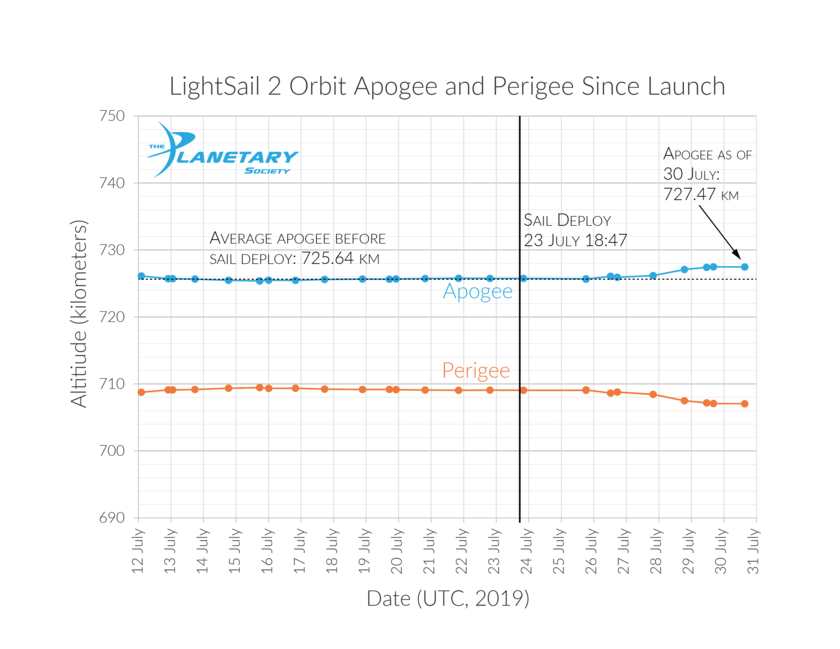 It's hard to predict exactly how much further the spacecraft will be able to raise its orbit. Prelaunch simulations predicted that as solar propulsion adds up, it would increase the craft's orbit by about half a kilometre per day.

In the end, this wasn't too far off the mark; in fact, the spacecraft increased by around 900 metres (2,950 ft) just the other day.

But just as there's a lower limit to the spacecraft's orbit, there's also an upper limit.

"The atmospheric density at those altitudes is really poorly modelled and highly variable, and so we don't really know at what point atmospheric drag is going to overcome our ability to continue orbit raising," explained Spencer in the press briefing.

"So we'll keep doing this as long as we can."

The applications for this technology are limitless, and scientists have proposed using it in the search for alien life, monitoring weather on the Sun and as a warning system for incoming asteroids.

There's even a dream that if a material can be found that tolerates high heat and radiation, a solar-sailing spacecraft could creep really close to the Sun, receiving a huge thrust that would ultimately allow it to travel much farther and at much higher speeds.

"This technology enables us to take things to extraordinary destinations in the Solar System and maybe even beyond, in a way that was never possible before," Nye said in the briefing, "because you don't need fuel, you don't need all the systems to control fuel, manage fuel and buy fuel."

NASA's Near-Earth Asteroid Scout, which is set to launch sometime in mid 2020, is probably the earliest application for this new technology. The bold mission plans to use a solar sail and a 6U CubeSat, or miniaturised spacecraft, to gather data on nearby asteroids that hold potential for future human missions.

"Some of the very early concepts for solar sailing missions had large spacecrafts and enormous sails," Spencer explained in the briefing.

"But what's really interesting is that in the last decade or so, it's been the CubeSat revolution where the technology has gotten so small that has allowed solar sailing to really take the forefront and be developed as a source of in space propulsion for these tiny spacecraft."