Decades before symptoms of Alzheimer's disease are detected, molecular changes are afoot in the brain. Clumps of amyloid-beta and tangles of another protein called tau start to accumulate in places, becoming stark hallmarks of a gradual decline in brain health.

Alzheimer-like amyloid plaques have also been found in brain tissue samples of people diagnosed with obstructive sleep apnea, a sleep disorder where a person's breathing repeatedly stops and starts. Now, a study has revealed a correlation in the locations of these clumpy proteins.

While scientists already knew the two conditions are related, this first-of-its-kind study provides the gritty details of brain involvement.

People with obstructive sleep apnea, the most common form of sleep apnea, can also experience shortfalls in memory, a classic feature of Alzheimer's disease, and have a higher risk of developing dementia.

Sleep deprivation in older adults has also been linked to elevated levels of the amyloid plaques and tau tangles characteristic of Alzheimer's disease. This might be because of the role sleep has to play in clearing the brain of proteins and other waste products that accumulate during the day.

"The connection is there [between sleep apnea and Alzheimer's disease] but untangling the causes and biological mechanisms remains a huge challenge," Robinson said.

The new study, a joint effort between Australian and Icelandic scientists, analysed brain tissue samples from nearly 60 people diagnosed with obstructive sleep apnea to look for the first sinister signs of Alzheimer's disease.

The group had previously found, using the same brain samples, that people with sleep apnea have smaller hippocampi (a part of the brain heavily involved in memory processing), just like people with Alzheimer's disease.

This time, staining sections of the hippocampus from 34 people revealed in microscopic detail how and where clumps of abnormal amyloid had aggregated before they died.

Those with severe sleep apnea had greater amounts of amyloid plaques piled up in their hippocampus than mild cases did, and the trend held true even after accounting for differences in age.

Some people had a considerable burden of the proteins, with "a density of plaques and tangles that were sufficiently high to qualify as Alzheimer's disease," Robinson said. 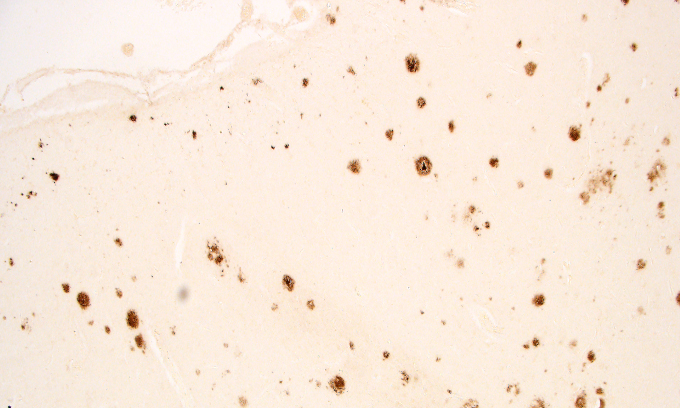 And yet before they died, none of the subjects had any symptoms or signs of cognitive decline strong enough to warrant a diagnosis of dementia or Alzheimer's disease.

"While none of the people in the study were diagnosed with [Alzheimer's disease] or dementia, it remains possible that some had undiagnosed mild cognitive deficits," the researchers noted in their paper.

This is also a good point to note. The build-up of amyloid plaques might not be the root cause of Alzheimer's disease, but just a sign of the disease. Although this is the leading hypothesis and amyloid plaques remain the primary suspects, it has been contested in the past, and much remains to be resolved in future research.

Returning to the current study, when the team focussed on just the mild cases of sleep apnea, as if winding back the clock, it showed how the amyloid plaques start to form just outside the hippocampus, the same as they do in Alzheimer's disease, and appear to spread into the hippocampus as the condition worsens.

"In cases of mild sleep apnea, we could only find plaques and tangles in the cortical area near the hippocampus, precisely where they are first found in Alzheimer's disease," Robinson explained.

Interestingly, whether or not the subjects used a continuous positive airway pressure (CPAP) machine to help with their breathing as they slept, made no difference to the levels of amyloid plaques detected in their tissue.

As with all good research, the findings prompt more questions and future studies.

"The next stage for our research will be to continue analysing these samples to get a full understanding of the neuropathology, including signs of inflammation and changes to the blood vessels that supply nutrients to the brain," Robinson said.

A larger study of people from different countries (not just Iceland) will also be needed to collect more evidence, and it may take time to collate the samples. Studies like this - using post-mortem brain tissue - are only possible thanks to the generous people who donate their brains to research.

For now, their kind donation gives us a clearer understanding of how two very common conditions, which together affect millions of people worldwide, are intertwined.

The research is published in the journal Sleep.