Some birds are renowned for the beauty of their songs, but the bird with arguably the most complex song in the world doesn't pen its own ditties.

The superb lyrebird (Menura novaehollandiae) of Australia mimics the sounds in its environment with exquisite skill and accuracy, building a spectacular repertoire. Its song, according to Sir David Attenborough, is "the most elaborate, the most complex, and the most beautiful" of all the birds.

You may not necessarily have thought so if you were to visit Australia's Taronga Zoo in Sydney, though. There, a seven-year-old superb lyrebird named Echo has learnt to perfectly mimic the wails of a crying human infant.

Bet you weren't expecting this wake-up call! You're not hearing things, our resident lyrebird Echo has the AMAZING ability to replicate a variety of calls - including a baby's cry!

The zoo is currently closed due to COVID-19, but that hasn't stopped our Meistersinger from developing and honing his skills. According to a report in The Guardian, Echo first started making the sounds of a crying baby about a year ago.

"I can only assume that he picked it up from our guests. Obviously he has been working on his craft during lockdown," Taronga's unit supervisor of birds Leanne Golebiowski told The Guardian.

"There are two other sounds that he makes at the moment which he has newly learned. One is the sound of a power drill which is scarily accurate – the second is our fire alarm. He even has the 'evacuate now' announcement down pat." 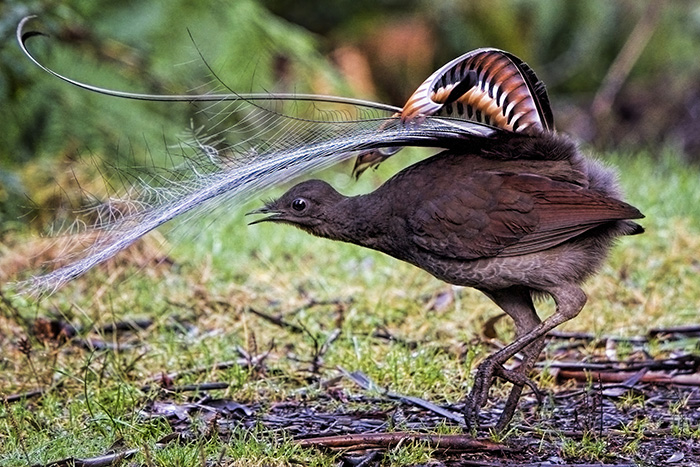 Interestingly, the superb lyrebird's syrinx – the vocal organ of songbirds – is somewhat simple, compared to other songbirds. It only consists of three pairs of muscles, instead of four, and is thought to be relatively primitive.

It's also not entirely clear why these birds mimic the sounds they hear. We do know they sing year-round, both males and females. Males sing more in the winter breeding season, which suggests that their mimicking songs have to do with courtship, but females more frequently mimic predator calls, suggesting it may be a defense mechanism.

Superb lyrebirds are also known for mimicking anthropogenic sounds, as per a snippet from Sir David Attenborough's Life of Birds - but they've never been recorded doing so in the wild.

One of the subjects of the video above is a lyrebird named Chook who resided at the Adelaide Zoo in South Australia. His impressive repertoire of construction sounds was picked up during the construction of a new enclosure; it takes very little guesswork to figure out where he picked up camera sounds.

In the wild, the songs of lyrebirds are more consistent with the bushland environments they inhabit – mostly the songs of other birds, and those are mostly learnt from other lyrebirds.

"Lyrebirds, like the other songbirds, learn their vocalizations – so it's a culturally transmitted trait," biologist Anastasia Dalziell told the Australian Broadcasting Corporation in 2019.

"That means a particular variance of their songs is passed down, not just from parent to offspring like a genetically inherited trait, but also to siblings and unrelated individuals across multiple generations. There's little to no change [in repertoire] even over decades. Lyrebirds in large part learned their mimicry from other lyrebirds. Hearing the original sounds keeps that mimicry accurate."

So, while the birds do have an impressive set of skills in their peculiar gullets, how they hone and use those skills does seem to vary based on context. At Taronga Zoo, Echo's context invariably involves the odd crying baby.