Living on The Space Station Leaves a Microbial 'Fingerprint' on Astronauts

If we're going to make it out further into the Universe, we need to know more about the long-term effects of living in space. Two studies have now revealed how the International Space Station (ISS) leaves a microbial 'fingerprint' on astronauts, and vice versa.

The results make for an interesting read. First, an analysis of nine astronauts, published in Scientific Reports in 2019.

This study looked at crew members who stayed on the ISS between six and 12 months, and found that, surprisingly, their gut microbiomes actually grew more diverse in the relatively sterile and bacteria-free environment of space. 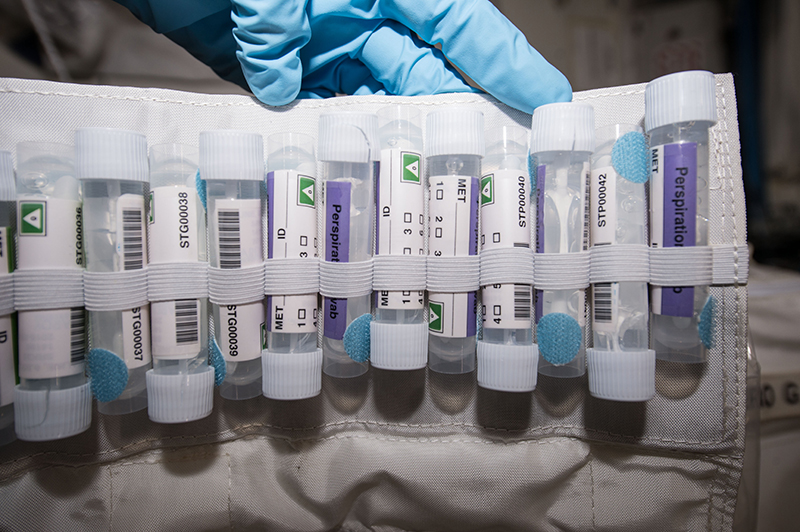 A microbiome swab kit on the ISS. (NASA)

"Since the station is a very clean environment, we were expecting reduced gut diversity in space compared to preflight or postflight because the astronauts are less exposed to environmental bacteria," says microbiologist Hernan Lorenzi, from the J. Craig Venter Institute.

This unexpected find might be a result of the carefully controlled diets on board the ISS: NASA works hard to make more than 200 food and drink options available on the space station, probably giving astronauts a more varied choice than they would get at home.

The good news is this 'fingerprinting' of the gut microbiome could actually be a positive – in general, the more diverse our gut bacteria, the better our chances of fending off disease. However, researchers haven't looked into whether this is the case in astronauts as yet.

More mixed results were seen when they tested skin microbiomes: some astronauts had an increase in the diversity of their skin bacteria, while others saw a decrease. The only consistent trend was a decrease in the Proteobacteria bacteria, possibly caused by the cleanliness of the space station (this phylum of bacteria is found in high amounts in soil).

And it turns out that we've also been causing microbial changes in the opposite direction, too. So much so that scientists are able to tell which astronauts have been on board the ISS simply by looking at the microbial traces they've left behind.

That's where the second study, published recently in PLOS One, comes in. Researchers collected mouth, nose, ear, skin, and saliva swabs from one ISS crew member before, during, and after their mission.

They then compared them with samples taken from eight ISS surfaces during and after the crew member's stay – and researchers were able to spot matching patterns of microorganisms.

A special lab technique known as shotgun metagenomic sequencing was used to explore the DNA in the samples in detail back on Earth. In total, the astronaut's microbiome contributed to 55 percent of the surface microbiome, and the surface microbes most closely resembled those found in their skin samples.

These bacterial similarities even lingered for up to four months after the astronaut left, the study found. While this aspect of the research only involved one crew member so far, it provides an intriguing foundation for future study.

By understanding the relationship between the microbiomes of space travellers and spacecraft – which would seem to be a close one – scientists will be better able to plan for lengthy stays out of orbit, and more equipped to keep astronauts safe and healthy.

"There's an interplay between the microbial community of the space station and its crew, and understanding the details is important for preventing complications for health or for spacecraft on long-term human space missions," says molecular biologist Crystal Jaing, from the Lawrence Livermore National Laboratory.

The research has been published in Scientific Reports and PLOS One.