A potentially new species of tree frog has been discovered in New Guinea, and it's full of surprises. For starters, instead of the bright green skin of its relatives, this creature sports a beautiful chocolate brown.

It was also found in an unexpected location.

"What's a little surprising about this discovery is that the well-known and common green tree frog of Australia has a long-overlooked relative living in the lowland rainforests of New Guinea," said one of the researchers, Griffith University and Queensland Museum phylogeneticist Paul Oliver.

"Because of this we named the new frog Litoria mira because the word Mira means surprised or strange in Latin."

The research, which has been published in the Australian Journal of Zoology, was actually looking more widely at the Australasian tree frog genus Litoria across Australia and New Guinea. 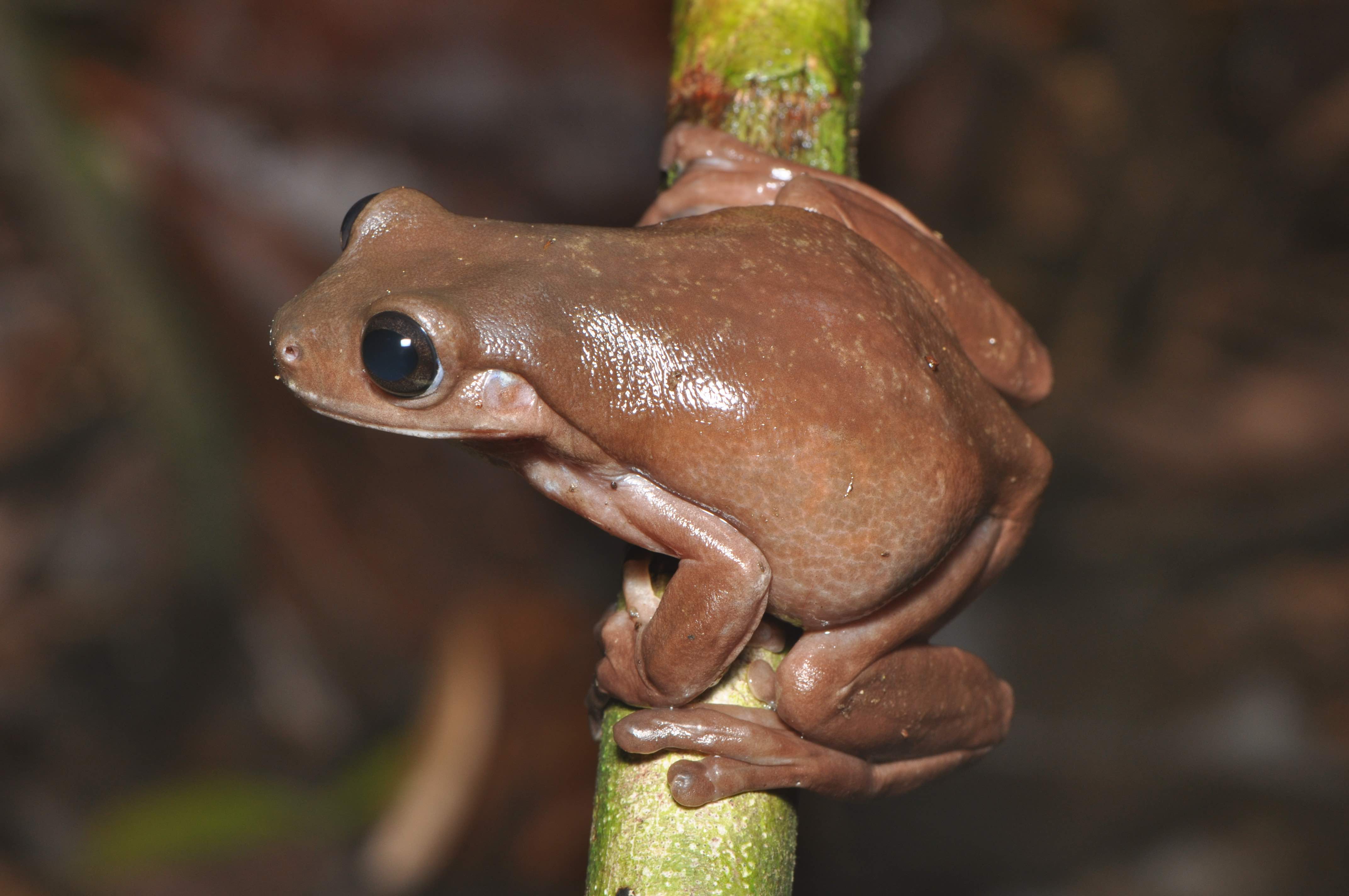 Litoria mira in all its adorable brown glory. (Steve Richards)

However, not all scientists agree, citing missing data in the genetic analysis that led to this conclusion, and the researchers of this new study have continued to call the species they investigated Litoria, rather than Ranoidea.

The team was investigating the habitat of the common Australian green tree frog (which we'll call Litoria caerulea for simplicity's sake), tracing it across the northern part of Australia and New Guinea. At its closest, the two land masses are a mere 150 kilometers (80 nautical miles) apart, and were once connected by a land bridge when the planet was colder and the sea levels lower.

This means that in the past there was significant intermingling between species in the two regions, and some – including the common green tree frog – live happily in both Australia and New Guinea. As a result, the frog's range expands across different climates: in New Guinea they're mostly located in the rainforest, while in Northern Australia they're predominantly found in the savannah.

"Our study is the first to present phylogenetic and phylogeographic data for a nominal frog taxon occurring across these two regions," the team wrote in their new paper.

"And it provides evidence for both established and novel biogeographic hypotheses and, as we will argue, recognition of a previously undescribed species."

The team went out and collected frogs, recorded their calls, and reanalyzed specimens that had been collected previously. There are some southern areas of New Guinea that are savannah-like, and this is where the team found most of the traditional L. caerulea which shared many traits with those in far North Queensland.

However, farther north in more swampy rainforest areas, the team found that the L. caerulea weren't really caerulea at all.

"The advertisement call is a deep, rasping bark repeated in long series, 'crawk, crawk, crawk …' that is indistinguishable to the ear from that of L. caerulea," the team explain.

However, "L. mira can be distinguished from all other Litoria by the unique combination of moderately large size … dorsal coloration uniformly brown, without white or yellow spots; small violet patch of skin at postero-ventral edge of eye; and ventral surfaces of limbs, torso and throat with moderate to extensive regions densely stippled with dark to medium brown."

It's not to say that there aren't other brown species of tree frog – there are over 215 species in the Pelodryadidae family which contains both Litoria and Ranoidea, and there are plenty which aren't bright green.

But the discovery of a new species is always exciting for scientists, and researchers think this newly identified amphibian might be much more widespread across New Guinea.

"Because the frog lives in very hot, swampy areas with lots of crocodiles, all these things discourage exploration," said Steve Richards from the South Australian Museum.

Now that we know they're there, let's keep it that way.

The research has been published in the Australian Journal of Zoology.