Cave Art Has Been Discovered on an Isolated, Empty Caribbean Island

Thousands of art pieces produced by a vanished civilisation have been uncovered on a Caribbean island, shining a light on a long-lost culture from the days before Europeans arrived.

The mix of faces, hybrid human-animal beings, and complex geometric designs marking the walls of Mona Island's caves has revealed details about the beliefs and lifestyle of a people whom Columbus mistook for Indians, helping their descendants connect with a history buried by time.

Mona Island is a 57 square kilometre (22 square mile) crop of uninhabited limestone and wilderness a little to the west of Puerto Rico.

Today it's a nature reserve. Wind back the clock five centuries, and it was thriving with an indigenous population who would soon be invaded by the violence and illnesses of the outside world.

The descendants of the Taíno live on, but their historians have been left to pull what they can from the Caribbean's archaeology to develop an understanding of their practices and beliefs from the days before European contact.

Fortunately, the Taíno of Mona Island literally left their mark on the walls of the island's caves, painting and scraping images into the limestone.

While examples of the artwork were already known to archaeologists, the astonishing preservation of many of the pieces had led researchers to mistaken their age.

Their uniqueness has also led anthropologists to question their connection with the island's indigenous cultures.

Researchers have now pushed deeper in some 70 caves on Mona Island, uncovering thousands of additional pieces in the gloomy depths of just under half of them.

"Most of the precolonial pictographs are in very narrow spaces deep in the caves," says Victor Serrano from the University of Leicester, a student working with the researchers in the field.

It mightn't be a coincidence that the highest concentration of pre-Columbus cave art was found in some tight spots inside one of the densest networks of caves in the Caribbean.

"For the millions of indigenous peoples living in the Caribbean before European arrival, caves represented portals into a spiritual realm, and therefore these new discoveries of the artists at work within them captures, the essence of their belief systems and the building blocks of their cultural identity," says researcher Jago Cooper from the British Museum.

Caves are significant features of Taíno religion and mythology, with the Sun and Moon emerging from underground.

Not only do the swirling patterns and monstrous hybrid forms provide hints on the religious and supernatural beliefs of this particular Taíno population, the techniques behind their construction contain valuable information.

Most of the images were described as extractive, formed used tools or even fingers to remove the rock's dark patina and reveal the lighter layers beneath.

This image below, showing what's thought to be a feathered head piece worn during ceremonies, was created using this technique. 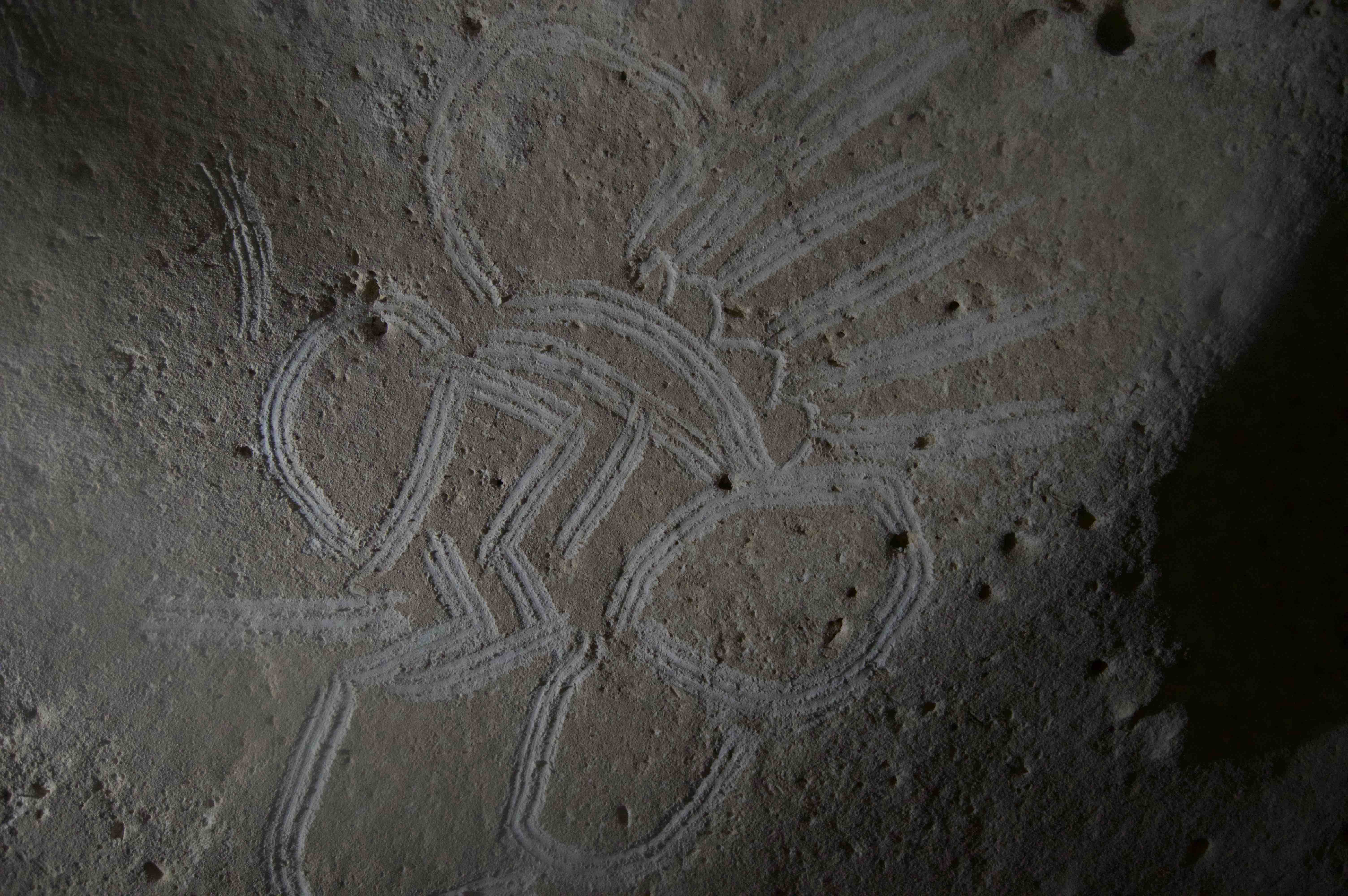 But a few were paintings or drawings, made charcoal or bat guano which had been mixed with plant resins and had slowly absorbed dustings of pigment from the cave's floor.

Paintings were found to be created in stages, either by adding new details or touching up faded imagery.

Importantly, the artwork was confirmed to date back to the centuries prior to European contact, affirming that while the technology and iconography stood out as different in the region, it was certainly pre-Columbian Taíno in origin.

Such rich galleries of art inside a unique network of caves makes it easy to imagine that Mona Island was a sacred destination in the Caribbean at the time of Columbus's arrival.

Not only is this research an academic win, it is important for modern families who connect with Taíno culture to develop a richer understanding of their ancestral past.

"As a Puerto Rican these groups of people that visited and lived in Mona Island are my ancestors, and their story is of utmost importance," says Serrano.

The Taíno introduced the world to foods like sweet potato, corn, and pineapple. Their words – such as hurricane, canoe, and tobacco – live on in modern languages.

Research such as this provides important insights into a people who influenced the world in such a short time before their culture was wiped from history.

This research was published in the Journal of Archaeological Science.