Scientists Analysed The Secret to Becoming Rich, And Talent Is Not Part of It

If you're wondering why your peers seem to be prospering way more than you are, it might not be because they're better at their jobs: it's probably just down to random chance, according to a new computer model of wealth simulation.

Charting a working lifespan of 40 years, the detailed computer simulation accurately reproduced the wealth distribution model of the real world, but found that those at the top of the money pile were the luckiest, not the most talented.

The aim of the study from researchers at the University of Catania in Italy is not to make you despair at the futility of life, but to understand the role that chance plays in the way we invest our time and resources in multiple fields.

The conundrum they set out to solve is this: if talent, intelligence, willingness to work and other factors that would typically help you get on in life are quite evenly distributed among the population, why isn't wealth?

Broadly speaking, 10 percent of humanity enjoys 85 percent of the wealth, but talent and smartness aren't hoarded by a select few to anywhere near the same extent – so what's the hidden ingredient?

"Our simulation clearly shows that such a factor is just pure luck," write the researchers.

The team started off with 1,000 computer-generated individuals, or agents, though the model can be adapted to any size. Talent is distributed normally around an average level, with some standard deviation – so in the model, everyone has some talent, but no one has a huge amount more or less than anyone else.

Meanwhile, everyone starts off with the same level of wealth. 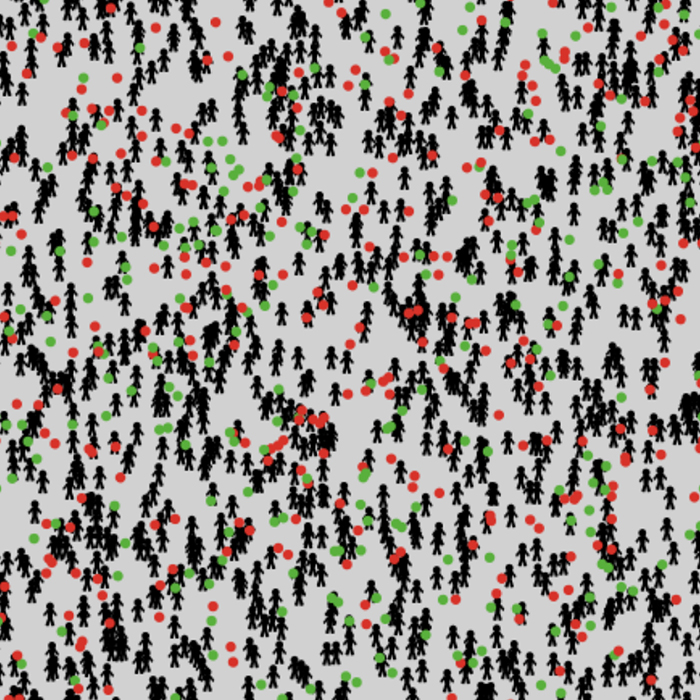 Agents were exposed to a certain number of lucky (green circles) and unlucky (red circles) events. (University of Catania)

Random events are then introduced into the simulation, which the agents can use to increase their wealth if they're lucky, or which hit their wealth levels if they're unlucky.

When the final results were analysed, the wealth distribution looked much like it does in the real world, with around 20 percent of people owning 80 percent of the weath. The simulation was repeated several times to check its integrity.

In fact, the top earners ended up being those with talent somewhere near the general average. What's more, the people at the top of the wealth pyramid had experienced the luckiest events during their simulated lives, while those at the bottom had been hit by the unluckiest ones.

"[The study] sheds new light on the effectiveness of assessing merit on the basis of the reached level of success and underlines the risks of distributing excessive honours or resources to people who, at the end of the day, could have been simply luckier than others," write the researchers in their paper.

The team behind the study now want to explore how the model can be used to maximise investments in everything from science funding to business practices. For example, it may be wise to invest resources equally among companies, rather than focusing on the people who've been most successful in the past, if luck plays such a big role.

It's worth mentioning that the work hasn't yet been peer-reviewed, so we can't take too many general conclusions from it until it's been more rigorously analysed. Nevertheless, it's an interesting explanation for a problem that has puzzled scientists for a long, long time.

"If it is true that some degree of talent is necessary to be successful in life, almost never the most talented people reach the highest peaks of success, being overtaken by mediocre but sensibly luckier individuals," conclude the researchers.

You can read the findings of the study on the pre-print server arXiv.org.