The famous black hole at the heart of the M87 galaxy is emitting jets of material that travel at near the speed of light.

The black hole at the heart of the Messier 87 galaxy bears the name M87*, and astronomers have been observing it for a long time. Last year, the Event Horizon Telescope captured an image of M87*, the first-ever image of a black hole. That image only added to M87*'s fame. 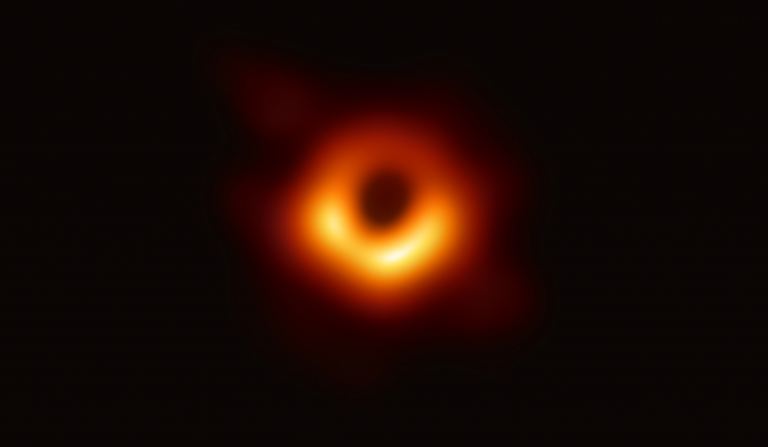 M87 is also known as Virgo A or NGC 4486. It's a supergiant elliptical galaxy in the constellation Virgo, about 53 million light years away from us. M87 spans about 240,000 light years, a little more than the Milky Way.

It's surrounded by an incredible 12,000 globular star clusters, compared to the Milky Way's paltry 200. Like other ellipticals, scientists think M87 grew so massive through mergers.

M87* (M87 star) is a supermassive black hole (SMBH) at the center of M87 with one of the highest masses of any SMBH. It's about 6.5 billion times more massive than the Sun. M87* is 55 million light-years away and emits a relativistic jet of matter that stretches about 5,000 light-years into space.

Years ago, the Hubble captured a well-known composite image of the jet in both visible and infrared light.

Astronomers have been watching M87*'s jet of material for years in different wavelengths: radio, optical, and X-ray. Now, for the first time, Chandra X-ray observations show that sections of this jet are moving at greater than 99 percent the speed of light.

"This is the first time such extreme speeds by a black hole's jet have been recorded using X-ray data," said Ralph Kraft of the Center of Astrophysics | Harvard & Smithsonian (CfA) in Cambridge, in a press release. "We needed the sharp X-ray vision of Chandra to make these measurements."

Kraft recently presented these new results at the American Astronomical Society meeting in Honolulu, Hawaii. The results are also published in a paper titled 'Detection of Superluminal Motion in the X-Ray Jet of M87' in the Astrophysical Journal.

What Causes the Jets?

A black hole like M87* draws material towards it at the center of the galaxy. As the material approaches, it begins to rotate around the black hole in a structure called an accretion disk. But that material isn't doomed to be sucked into the hole.

Only a small amount of it falls in, while some of it is ejected back out into space. The ejected material takes the form of a jet, or a beam, that follows magnetic field lines. Those jets aren't smooth and featureless: they feature clumps or knots that observatories like the Chandra can see.

Two of those knots are of particular interest to astronomers. They've used images over the years to track the motion of those knots. They're about 900 and 2,500 light-years from the SMBH, respectively.

Wait. Nothing Travels Faster than the Speed of Light

But that's impossible. Nothing travels faster than the speed of light. That, of course, is true, so there must be something else going on here.

That something else is called "superluminal motion".

"One of the unbreakable laws of physics is that nothing can move faster than the speed of light," said study co-author Brad Snios, also of the CfA. "We haven't broken physics, but we have found an example of an amazing phenomenon called superluminal motion."

That's because the jet of material itself is travelling almost as fast as the light it generates. Since M87*'s jet is pointing almost right at us, it generates these apparent impossible speeds. Astronomers have seen these jets moving at these speeds before, but never in X-ray light. That means they've never been sure that it was the clumps of material themselves moving at 99 percent the speed of light. It could have been shock waves rather than the clumps.

The jet from M87* moves in a spiral pattern around a magnetic field, and that helped clarify the speed of the jets. In the X-ray observations, the team behind the study saw that the feature with the highest observed speed - 6.3 times the speed of light - faded by more than 70 percent between 2012 and 2017.

The fading only happened in X-rays, not in optical and UV, and is likely caused by the particles losing energy over time as they spiral around the magnetic field.

That phenomenon is called synchrotron cooling. What that means is the astronomers were seeing x-rays from the same particles at different times, meaning what they're observing can't be a wave, and has to be the particles in the jet themselves.

"Our work gives the strongest evidence yet that particles in M87*'s jet are actually traveling at close to the cosmic speed limit", said Snios.

The Chandra data and the Event Horizon Telescope are complementing each other nicely when it comes to studying M87*. When the EHT imaged the event horizon ring around the black hole, it was a six-day snapshot.

But the Chandra study of the jet is looking at material that was ejected out of M87* hundreds and even thousands of years earlier.

The EHT image is also about 100 million times smaller than the jet that Chandra has imaged.

"It's like the Event Horizon Telescope is giving a close-up view of a rocket launcher," said the CfA's Paul Nulsen, another co-author of the study, "and Chandra is showing us the rockets in flight."