Depending on which way you look at it, 22-year-old Brock Meister of Plymouth, Indiana, is either incredibly lucky or incredibly unlucky.

When he was born, he wasn't breathing, and experienced seizures before CPR saved him. As a teen, he endured chemo and radiation to beat brain cancer. But it's his latest brush with death that has to be the most incredible survival story of all.

On the night of January 12, Brock and a friend climbed into his pickup truck. Brock had drunk a couple of beers, so his friend agreed to drive. The plan was to meet some other friends at his grandparents' house, just a short drive away.

They never made it.

"I could have been drinking and driving, but we were doing the right thing and having somebody else driving, and still, something happened," Brock told WNDU News.

That 'something' was black ice: a large, invisible patch of it, hidden on the surface of the dark road. 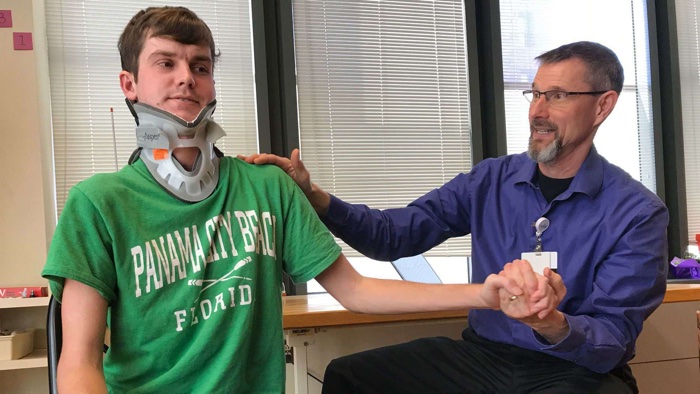 When the pickup slid over it, the rear of the vehicle swung out, striking a ditch, with the force of the impact turning the truck over on its side.

Brock was thrown sideways, his head punching and shattering the window, with sheer momentum urging the rest of his body through the opening his head had just made.

"I remember everything," Brock told Inside Edition.

"My head went through the window. I had my seatbelt on, but half my body was out the window. My cousin grabbed the back of my shirt and pulled me back in. I just remembered blood running down my face."

Despite the severity of his injuries, Brock thought he might be okay.

"My neck hurt, but I wanted to get up," he said. "Luckily [my friend] held me down and wouldn't let me get up until the paramedics got there."

That friendly restraint may have been what saved Brock's life. 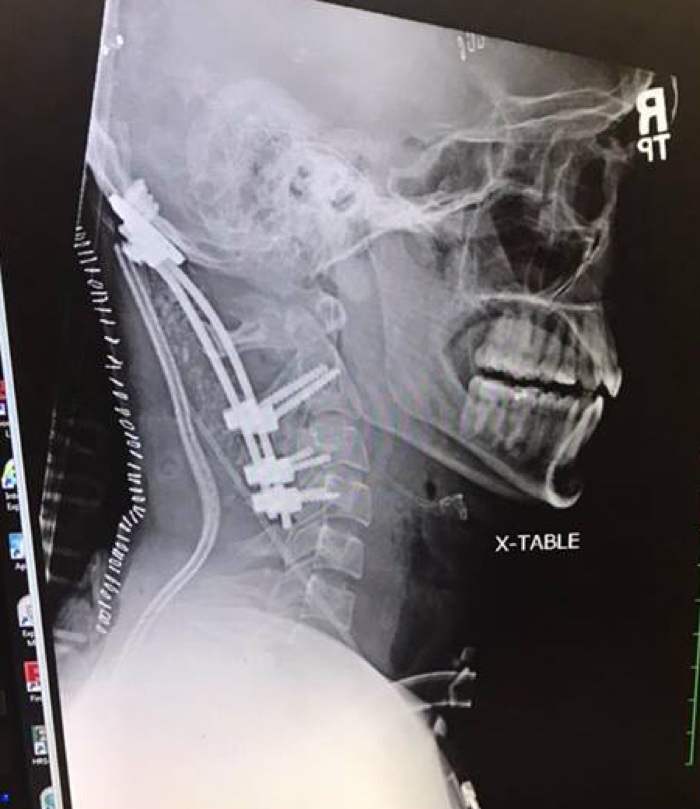 Unbeknownst to anyone at the time, the 22-year-old had sustained a traumatic atlanto-occipital dislocation – effectively, a complete separation of the skull from the spine.

The injury, also known as an internal decapitation, is described by Brock's neurosurgeon – Kashif Shaikh of Memorial Hospital in South Bend, Indiana – as "almost a universally fatal event".

It was his friend's quick thinking in not letting Brock get up right after the accident that may have prevented the internal decapitation from becoming deadly.

"That's really the most dangerous time for him, is when he's out in the field almost like a bobble head doll," Shaikh told Inside Edition.

Luckily for Brock, his body was stabilised, cautiously removed from the vehicle, and placed on a stretcher, before being driven to hospital – and becoming only the second ever admission with this rare, dangerous injury.

Shaikh – who was one of the team who treated Brock's brain tumour during his teenage years – and fellow surgeons used screws and rods to realign Brock's bones and joints.

Next, Brock had to wear a neck brace and undergo months of physical therapy, but while he still experiences some pain from the accident, he has recovered 50 percent of movement in his neck.

"I have fought for my life this time around, and some days I feel like I still am," he said in a statement.

"It was kind of scary at first, but I have more movement than I thought I would, so that's good. I'm just thankful to be here, so that's all that matters."