High over the peak of a long dead volcano on the Martian equator, a feathery white cloud stretches across the sky.

At first glance it looks like the plume of an eruption, but Mars is a world with a cold, dead heart. It has been for some time. So what's going on?

Researchers think they have a good idea what's really behind this fog trail, having seen its kind before.

The 1,500 kilometre (930 mile) strip of vapour over Arsia Mons appeared on images taken of Mars by the Mars Express orbiter more than a month ago on September 13. 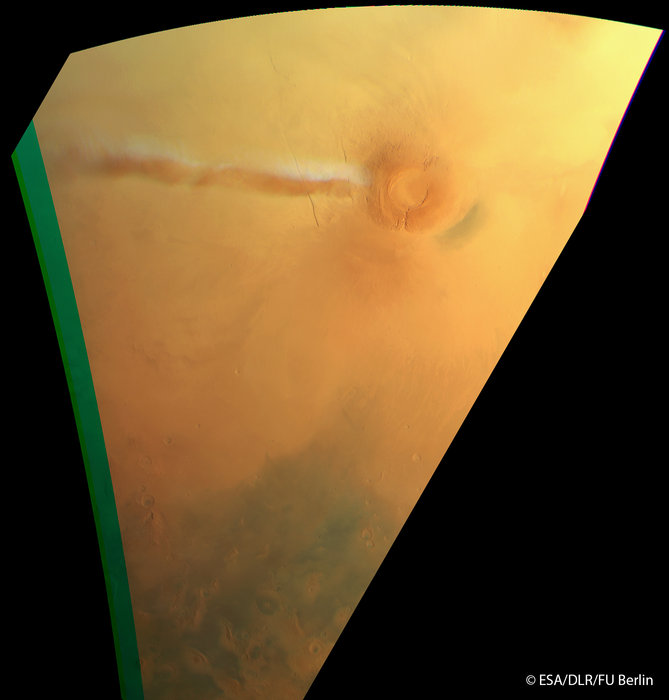 It's hung about ever since, shifting with changes in weather and growing long enough in the Mars' morning for Earth-based telescopes to spot it, stark white against the rusty Martian soil.

While it appears to emerge from the summit of a volcano, to researchers from the European Space Agency this is simply a trick of the eye. Mars hasn't seen a single eruption for millions of years, so there's zero chance that Arsia Mons is on the verge of reawakening.

Still, even if the plume isn't volcanic in origin, the elevated peak of Arsia Mons is still responsible.

The phenomenon is what meteorologists refer to as an orographic cloud.

They're typically seen on the downwind side of mountains, forming when dense air close to the surface flows uphill and expands, cooling to a temperature that allows moisture to condense on particles of dust.

Clouds over Arsia Mons are a common sight throughout most of the year, tending to clear in the months prior to the Northern Hemisphere's winter solstice.

Every few Earth years, given the right seasonal conditions on Mars, clouds of water ice blossom as moisture-laden air blows up the volcano's skirt. Mars Express captured similar images back in 2009, 2012, and 2015. So finding it again in 2018 is no surprise.

The cloud's reappearance provides researchers with an opportunity to gauge the density of particles hanging about in the atmosphere.

Earlier this year, the planet was swamped by a massive dust storm that now seems to have taken the life of the battling rover Opportunity. This cloud could help us refine models on how dust rises and settles on Mars, informing the scope of future missions.

See you again in a few years, long white cloud!