Here's What Can Happen if You Always Sleep With Mascara on, Oh God

If you're one of those people who get too lazy to wash their make-up off at the end of the day, oh boy are you about to question your life choices.

A 50-year-old woman in Sydney, Australia showed up to the doctor complaining about a gritty sensation in both eyes. The ophthalmologist found horrifying black spots on the inside of the patient's eyelids, all due to a problematic beauty routine (warning, gross photo ahead).

"She admitted to more than 25 years of heavy mascara use on her lashes with inadequate removal," ophthalmologist Dana Robaei reported in the case study.

Decades of sleeping with mascara on had resulted in a bunch of problems in the woman's eyes. Inside the eyelids, which are lined with the conjunctiva, tiny bits of mascara had accumulated over the years and turned into solidified concretions.

Some of these hard bits were even poking through the conjunctiva and scratching the woman's corneas, which was causing the discomfort. 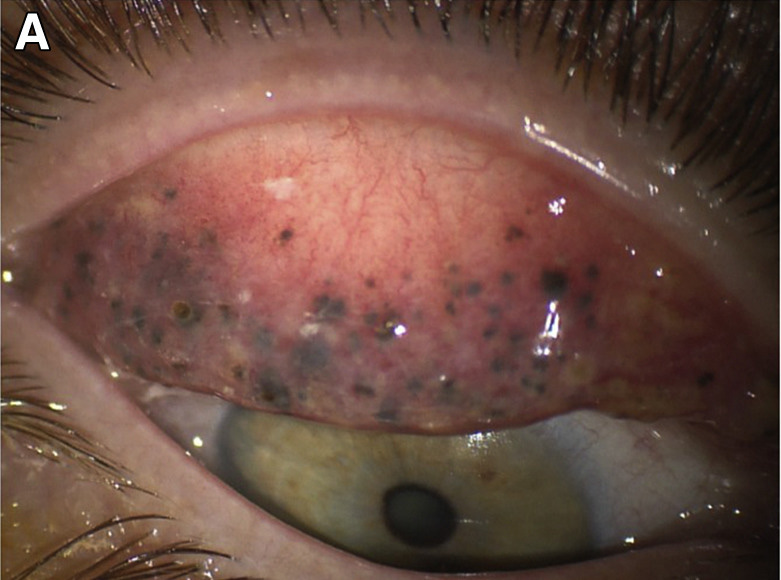 "'The symptoms are like somebody throwing a handful of sand in your eye, it's constantly irritating," Robaei told The Daily Mail.

Black mascara typically consists of a bunch of oils, waxes, and water mixed together with carbon black and iron oxides for the pigment.

If make-up hasn't been contaminated in some way, the types of ingredients used in modern concoctions are pretty safe to use - but mascara does flake off your lashes sooner or later.

If you put anything on your eyes, and never bother to take it off, it makes sense that some of it could migrate inside sooner or later.

It's not clear what type of mascara the woman used, but some of the lengthening brands also contain tiny bits of synthetic fibre, which have an even higher chance of travelling away from your lashes and going straight for the eyeball.

In this patient's case, those black mascara bits congregated and irritated her eyes so much, she ended up with a weird form of chronic inflammation, as the eyelids also contained swarms of pigmented macrophages, a type of immune cell.

The patient, named Theresa Lynch, and her doctor went public with the case study and additional horrifying pictures, as a warning for other people who suck at eye hygiene.

It took doctors 90 minutes to surgically remove all the lumps from Lynch's eyes, and she's left with permanent scarring on both the eyelid and the cornea as a result.

If you're borderline considering throwing out all make-up forever, remember this was a pretty extreme case. As long as you clean it off properly and replace your mascara every three months or so, you'll likely be fine.

"This was an amazing case, I'd never seen anything like it. But this is a risk not many people are aware of," Robaei said.

But if you're constantly falling asleep with your make-up on, you might want to check inside your eyelids, just in case. And start washing your face.

"It's so important to properly take your makeup off every single night. You can't miss a single day," Lynch said.

"I should never have let it get this far."

The case was published in Ophthalmology.