For the first time, researchers have used diamond to build a solid-state maser that can operate continuously at room temperature. This could burst open the technology for everyday use such as medical imaging and security scanners at airports.

Masers are like the microwave version of lasers. It stands for "microwave amplification by stimulated emission of radiation", and, just as lasers deliver an intense beam of light, masers deliver a concentrated beam of microwaves.

They were actually invented before lasers, and have been used in applications such as atomic clocks, radio telescopes, and spacecraft communication.

However, solid-state masers are far from easy to run. They're created by amplifying microwaves through a crystal, such as ruby, and require extreme conditions such as strong magnetic fields and temperatures near absolute zero (-273 degrees Celsius, or -459.4 Fahrenheit). All very limiting in how the technology could be applied.

Using a laboratory-grown diamond as the amplifying crystal, researchers from Imperial College London (ICL) and University College London have managed to create the first solid-state maser that runs continuously.

The project builds on previous work in 2012 by ICL and the UK National Physics Laboratory.

At that time, researchers built a solid-state maser using a p-Terphenyl crystal doped with pentacene as the amplifier. This could operate at room temperature, and without magnets - but only in very short millisecond pulses. And even if it could have operated continuously, the crystal would have melted.

In this new system, the researchers have replaced the crystal, growing a synthetic diamond in a nitrogen-rich atmosphere. A high-energy electron beam was used to 'knock' carbon atoms out of the diamond, creating vacancies in its structural lattice. 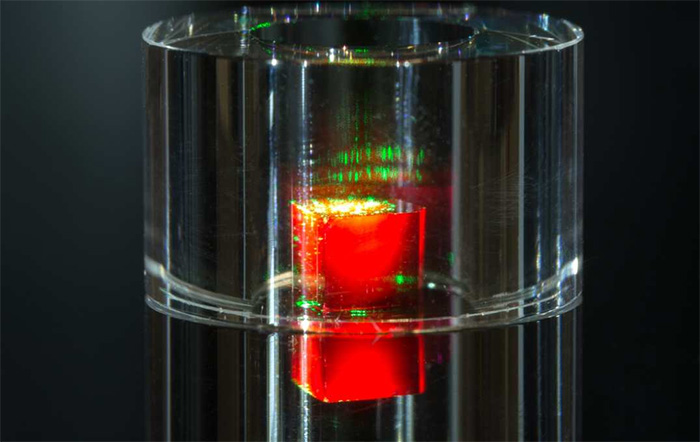 The diamond is held inside a sapphire ring before the laser is used. (ICL)

Heating the diamond then caused the carbon vacancies to pair up with nitrogen atoms, creating a type of defect called a nitrogen-vacancy centre, inside which the electron spins can be controlled using magnetic fields, electric fields, or microwaves.

When placed inside a ring made of sapphire, to concentrate the microwave energy, and illuminated with green lasers, the maser worked. Not just at room temperature, but also continuously. 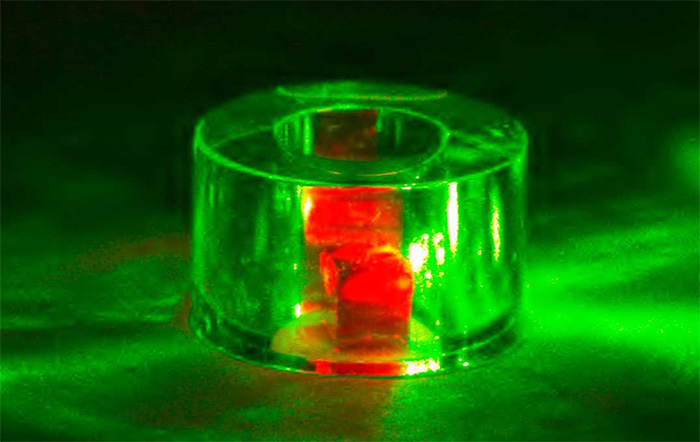 The maser is illuminated by green laser light. The red light is fluorescence from the NV centres. (ICL)

"This technology has a way to go, but I can see it being used where sensitive detection of microwaves is essential," said co-author Neil Alford of Imperial College London.

As well as airport scanners and medical imaging, the researchers believe the maser technology could be used for sensitive applications such as bomb detection, quantum computing, and even the hunt for life on other planets.

"This breakthrough paves the way for the widespread adoption of masers and opens the door for a wide array of applications that we are keen to explore. We hope the maser will now enjoy as much success as the laser," lead researcher Jonathan Breeze said.

The paper describing the maser has been published in the journal Nature.