Deep below the ocean's waves, ancient tracks left by a long-hidden migration are etched into the submerged landscape of the seafloor.

These mysterious imprints were not made by deep-sea creatures moving from one place to the next, but rather by a flotilla of ancient icebergs drifting aimlessly for thousands of miles across the ocean.

As they drifted, they left visible grooves in the seabed they scraped across, scars that even today reveal the long journeys these huge ice masses once took.

In a new study, researchers investigated several of these iceberg scours left by massive floating hunks of ice, stretching in total for over 5,000 kilometers (more than 3,000 miles) down the east coast of North America in an epic southern migration, all the way from northeast Canada to the Florida Keys. 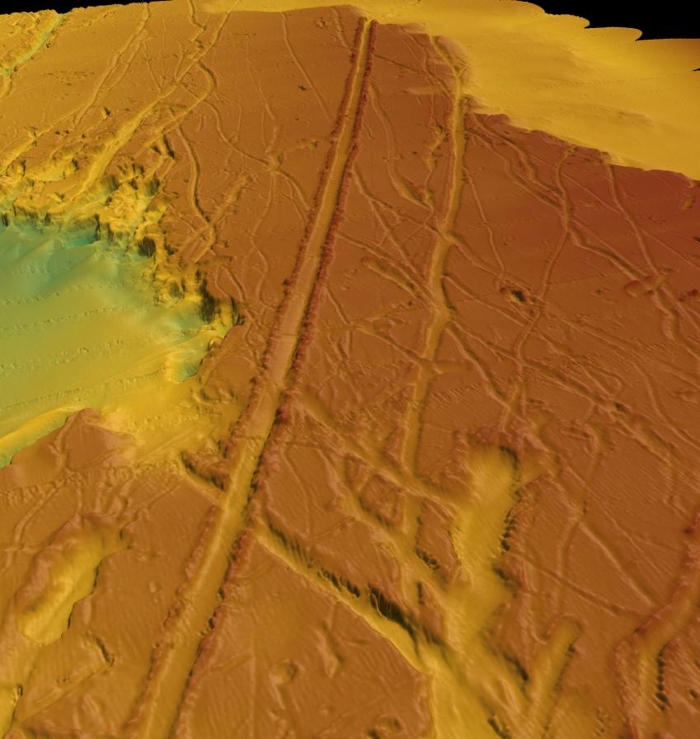 "The idea that icebergs can make it to Florida is amazing," says climate modeler Alan Condron from the Woods Hole Oceanographic Institution.

"The appearance of scours at such low latitudes is highly unexpected not only because of the exceptionally high melt rates in this region but also because the scours lie beneath the northward-flowing Gulf Stream."

In a follow-up published this week, the pair investigated the age of these ancient tracks, which number over 700 scours in total.

An initial analysis based on radiocarbon dating of sediment cores collected from the sites of some of the markings suggests the scars in the seabed were left over 31,000 years ago, although it's possible others might be even more ancient.

"We also expect that there are younger and older scours features that stem from other discharge events, given that there are hundreds of scours yet to be sampled."

According to the researchers' modeling, the only way for such massive icebergs to drift so far south would be for a huge release of glacial meltwater from Hudson Bay, a large body of ocean water in northeastern Canada, located north of Ontario.

"Numerical glacial iceberg simulations indicate that the transport of icebergs to these sites occurs during massive, but short-lived, periods of elevated meltwater discharge," the researchers explain in their paper.

During such glacial outburst floods, large volumes of meltwater release icebergs from the subpolar North Atlantic, which begins drifting toward the subtropics.

"These floods create a cold, fast-flowing, southward coastal current that carries the icebergs all the way to Florida," Condron says.

"What our model suggests is that these icebergs get caught up in the currents created by glacial meltwater, and basically surf their way along the coast."

According to the researchers, the simulations suggest icebergs could be transported even further than Florida, to other subtropical sites such as Bermuda and Bahama, releasing vast volumes of freshwater as they melt into their saltier surroundings.

In addition to revealing the incredible journeys some icebergs take, this kind of research tells us more about the behavior of the ocean itself during climatic events – whether long, long ago, or near at hand.

"As we are able to make more detailed computer models, we can actually get more accurate features of how the ocean actually circulates, how the currents move, how they peel off, and how they spin around," Hill says.

"That actually makes a big difference in terms of how that freshwater is circulated and how it can actually impact climate."