Measles Cases in The US Have Already Surpassed All of 2018, And It's Only April

Those who doubt the power of the anti-vaccination movement need only look at the statistics. Just three months into the new year and already, the United States has more cases of measles than all the 12 months of 2018 combined.

Since the first day of January, the Centres for Disease Control and Infection (CDC) have counted over 380 individual cases spread across 15 states, including Washington, Texas, New York, and California.

That's the second-greatest number since measles was declared officially eliminated in the US nine years ago, and a dangerous indication of things to come.

In 2014, the year that currently holds first place, a shocking 667 measles cases were reported. Now, if things continue as they are, the US is on track to surpass that number... by a lot. 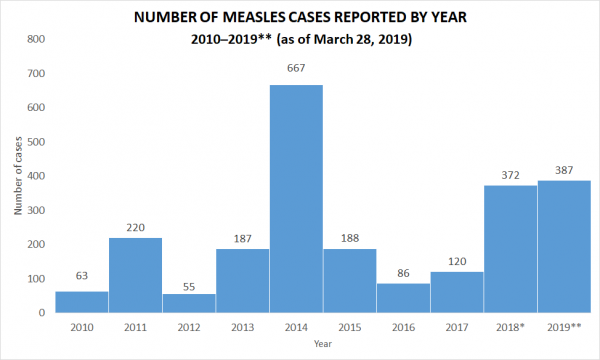 None of this should come as a surprise. While measles was officially 'eliminated' in the US in 2000, today, national borders are far more fluid than they once were, which means if someone travels to the US with measles, it can incite an outbreak among unvaccinated communities.

This is what happened in 2014, when the US experienced 23 measles outbreaks, one of which brought down 383 individuals in an Amish community in Ohio.

It's also what happened last year, when visitors from Israel incited a measles outbreak among unvaccinated people in Orthodox Jewish communities.

Still, not all outbreaks are due to religious exemptions. General misinformation and fear of vaccines plays a powerful role in these eruptions - to the point where the World Health Organisation had to declare vaccine hesitancy one of the most dire global health threats in 2019.

"However, some countries that were close to eliminating the disease have seen a resurgence."

The US is just one of many, many examples. Last year in Europe, nearly 83,0000 people contracted measles, the highest number in a decade.

In fact, according to UNICEF, 98 countries reported more measles cases in 2018 than the year before, jumping by nearly 50 percent globally and  "eroding progress against this highly preventable, but potentially deadly disease."

Crazier still is the fact that just 10 countries - including Brazil, the Phillipines and France - account for three-quarters of that total increase.

No matter which way you slice it, these statistics make three things clear: this is a global problem; it's not going away anytime soon; and it's only getting worse the longer we leave it.

"This is a wake up call. We have a safe, effective and inexpensive vaccine against a highly contagious disease – a vaccine that has saved almost a million lives every year over the last two decades," says Henrietta Fore, UNICEF's Executive Director.

"These cases haven't happened overnight. Just as the serious outbreaks we are seeing today took hold in 2018, lack of action today will have disastrous consequences for children tomorrow."

The latest report was published by the CDC.