Modern roads and developments share more similarities with ancient urban centers than we often realize – which is certainly the case with the sprawling Teotihuacan settlement, once located around 40 kilometers (25 miles) northeast of Mexico City.

Researchers have used LIDAR ("light" and "radar") scanning to reveal that the contours of Teotihuacan – much of it now built over and hidden from view – are still reflected in the roads and structures erected in the same location today, some 1,500 years later.

The same study has brought to light some of the amazing engineering carried out by the people of Teotihuacan: rerouting rivers to match points of astronomical significance, and shifting huge amounts of soil and bedrock to shape their city.

"We don't live in the past, but we live with the legacies of past actions," says anthropological archaeologist Nawa Sugiyama, from the University of California, Riverside.

"In a monumental city like Teotihuacan, the consequences of those actions are still fresh on the landscape."

Between the years 100 BCE and 550 CE, Teotihuacan was one of the largest cities of the ancient world, covering around 21 square kilometers or 8 square miles. It was made up of many pyramids, plazas, and other commercial and residential buildings.

Some of the amazing structures of Teotihuacan are still around today, but a lot of it has been lost – and that's where LIDAR aerial mapping technology comes in. It uses reflected laser light to measure structures and materials underground.

Here, the researchers used a combination of LIDAR, surveys taken on foot, and previously collected mapping data to draw comparisons between ancient Teotihuacan and the Teotihuacan Valley as it is today – now a UNESCO World Heritage Site.

They found that 65 percent of urban areas in the region contain property or features that aligned orthogonally within 3 degrees of 15 degrees east of astronomical north – the same alignment that Teotihuacan was carefully built to. Meanwhile, modern day rock fences were built along the same lines as ancient walls, now underground. 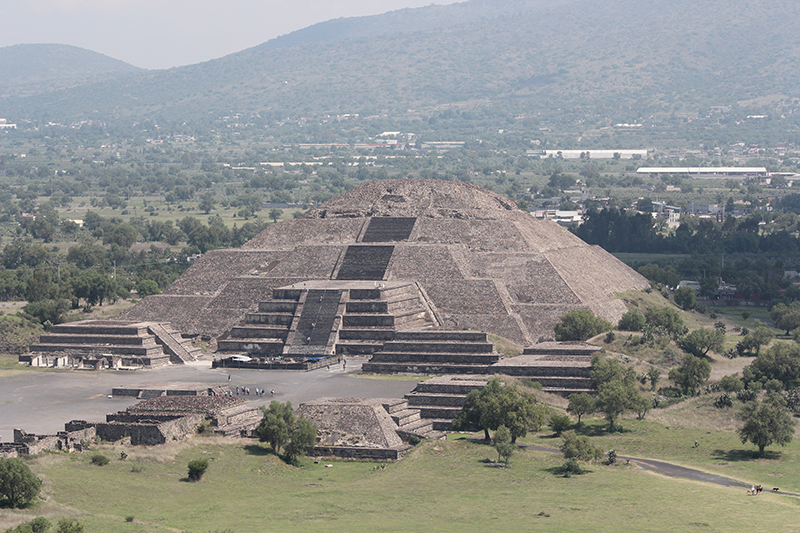 The ancient Teotihuacans also invested a lot in rerouting rivers and building canals: The researchers discovered around 16.9 kilometers (10.5 miles) of existing waterways have their origins in the Early Classical Teotihuacan landscape.

"The Teotihuacan Valley's unique environmental, cultural, and academic trajectories support a multi-scalar definition of humans as geomorphic agents," write the researchers in their published paper.

The study estimates that around 372,056 square meters (4,004,777 square feet) of artificial ground had been laid over 300 years across the region. In total, 298 features and 5,795 human-made terraces were revealed that had not been previously recorded, while more than 200 features that once existed and have since been wiped away by mining activities were also noted.

Archaeologists continue to uncover new secrets about Teotihuacan and its history – we've previously seen researchers use the latest technology to reveal hidden tunnels and ritual offerings at the ancient site.

With this latest study, we know that the innovations and choices made over a thousand years ago continue to influence civilization. Next, the team wants to expand their LIDAR mapping to cover a wider area in three dimensions, across a longer period of time.

"We can't fight modern urbanization," says Sugiyama. "The LIDAR map provides a snapshot of these ancient features that are being abolished at an alarming rate that would otherwise go unnoticed. It's one of many ways we can preserve our heritage landscape."