These Are The First-Ever Monkeys Cloned Using an Advanced Technique

Chinese scientists have announced a new world first. They have successfully cloned primates using somatic cell nucleus transfer (SCNT) - the cloning technique that gave us the first ever cloned mammal, Dolly the sheep, back in 1996.

The two new arrivals are a pair of genetically identical long-tailed macaques, born at the Chinese Academy of Sciences Institute of Neuroscience in Shanghai.

Their names are Zhong Zhong and Hua Hua, born eight and six weeks ago, respectively.

They're not the first primates ever to be cloned - that honour goes to Tetra, a rhesus monkey cloned in 1999 in Oregon using the embryo-splitting method. This cloning technique is easier to accomplish, but has limitations not borne by SCNT.

Now the Chinese team have managed to tweak the advanced SCNT technique to finally work in primates - and the road wasn't easy.

"We tried several different methods, but only one worked," said senior author Qiang Sun. "There was much failure before we found a way to successfully clone a monkey." 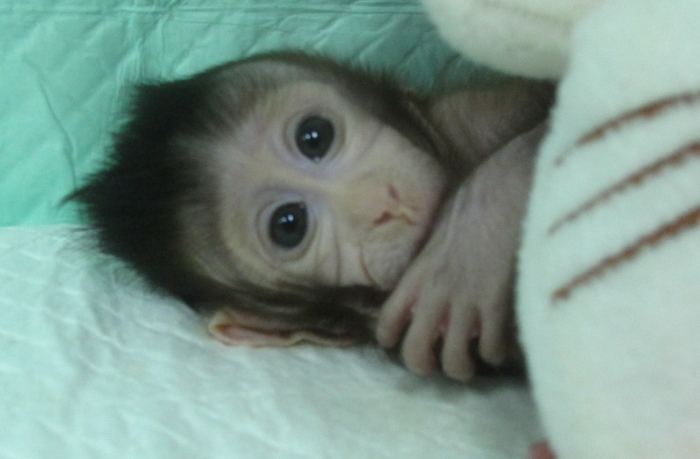 Embryo-splitting is exactly what it sounds like, and it's the same process that produces identical twins in the womb, just conducted artificially. It's a technique that's often used for assisted reproduction in farm livestock. However, at most, it can only produce four genetically identical siblings - quadruplets.

In contrast, to create a clone using SCNT, you need to replace the nucleus of an egg cell with the nucleus of a somatic (body) cell, which contains DNA from another individual. Since Dolly, the technology has become so accessible that Chinese researchers even have robots that help with pig cloning.

But even though SCNT can produce a larger population of genetically identical animals than embryo-splitting, previous attempts to clone rhesus monkeys using the technique have found that the embryos tend not to progress on to the blastocyst stage.

The Chinese team turned to previous studies that found preventing epigenetic changes to DNA - chemical modifications affecting how certain sequences are expressed - boosted the chances other cloned embryos would survive.

This was progress, but something was still amiss. While the researchers were able to bring foetuses to term using adult donor cells in the eggs, the baby monkeys only survived for a short time after being born.

Finally, they improved on their success by using cells taken from foetal tissue. Zhong Zhong and Hua Hua were cloned using the same foetal fibroblasts, cells taken from the connective tissue of a macaque foetus. Populations of genetically identical monkeys would be a valuable asset to research.

You've probably heard of twin studies, where sets of twins are used to more accurately identify the effects of an activity or drug. Astronaut Scott Kelly is a famous example - his identical twin was used to help figure out what changes occurred within Kelly's body during a year in space on the International Space Station.

This is because how people's bodies respond to things can vary from person to person, and genetically identical individuals are more likely to provide a more accurate control.

"There are a lot of questions about primate biology that can be studied by having this additional model," Sun said.

"You can produce cloned monkeys with the same genetic background except the gene you manipulated. This will generate real models not just for genetically based brain diseases, but also cancer, immune, or metabolic disorders and allow us to test the efficacy of the drugs for these conditions before clinical use."

The experimental use of primates is controversial in many parts of the world. It is regulated in the EU, where it is only permitted if no other methods are available, and banned to varying degrees in some regions.

Yet, because of their genetic proximity to humans, their intelligence and their social dynamics, non-human primates are considered vital to biomedical research.

The US National Institutes of Health sets international guidelines for research animals, which the Chinese Academy of Sciences says it is following, and Zhong Zhong and Hua Hua are thriving, growing at a healthy rate. They will continue to be monitored closely across both their mental and physical development.

The researchers are also working on improving the technique, and the Academy is expecting the births of more cloned macaques in the months ahead.

The team's research has been published in the journal Cell Press.