From a distance, anybody would have been fooled. It was the same size as a potato, and its brown, dirty appearance resembled every other muddy spud in the potato chip factory.

But this was no harmless vegetable. The unusually heavy spud-like object discovered in a Hong Kong potato chip plant this weekend was in fact a dangerous weapon that had travelled thousands of miles and long decades, all without fulfilling its deadly purpose.

After being detected in potato-processing machines at the Calbee Four Seas Company on Saturday, the impostor potato was identified by authorities as a World War I-era hand grenade – a rusty relic that had imperceptibly snuck into the snack-making facilities, concealed amongst a shipment of fresh spuds imported from France.

"We identified it as a German-made weapon believed to have been used during the first World War," assistant district commander Wong Ho-hon from the Hong Kong Police Force told the South China Morning Post.

"It was likely to have been shipped in from France with the batches of potatoes because we found it covered in mud and dirt." 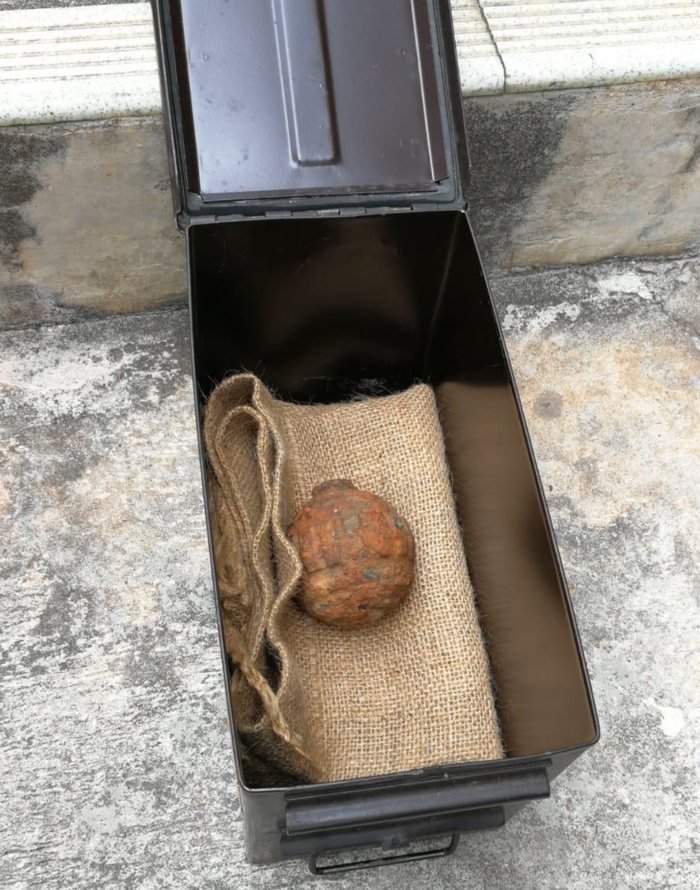 Aside from its hard, metallic casing, the real giveaway was the weight. While the 8 centimetre-wide (roughly 3 inch) grenade could easily pass for a potato in size, it weighed approximately five times as much, at about 1 kilogram (2.2 lbs).

Most concerning for the first responders though was how to safely contain a potentially unstable WWI bomb – a rusty leftover that had awaited its explosive date with destiny for well over a century.

"Since the grenade had not blown up at the time it was thrown, there was an immediate danger that needed to be handled right away," Wong said, explaining that police used a high-pressure water firing technique to safely detonate the device on the factory site:

Given the grenade's extreme age and rusty, damaged condition, there's no telling exactly how serious or potentially imminent the threat of an explosion was, experts say.

According to military historian Dave Macri from the University of Hong Kong, though, it's possible the dormant weapon might not have posed a serious live danger.

"Chances are, the weapon was never armed because to ignite it, you have to withdraw the safety pin and release a lever," Macri told the South China Morning Post.

"And since it didn't go off, it was probably never triggered."

While that might be the case, every unexploded incendiary device left over from long-ago wars remains an unknown proposition, and the problem is particularly compounded for small bombs like grenades, which were often simply left behind in buried trenches after aerial bombardments.

Nobody knows exactly how many dangerous relics lie in wait to be scooped up – or just where they'll turn up next – but existing estimates of the ongoing clean-up effort point to the unimaginable, bloody scale of WWI.

"Since the start of the year we've been called out 300 times to dispose of 25 tonnes of bombs," munitions disposal expert Michel Colling told The Telegraph in 2016, in reference to bomb recoveries in French soil that once played host to the Battle of the Somme.

"As soon as you start turning the earth up, you find them. At this rate, we have another 500 years to clear the area, so the work is far from over."