It was 1952, and Alan Turing was about to reshape humanity's understanding of biology.

In a landmark paper, the English mathematician introduced what became known as the Turing pattern – the notion that the dynamics of certain uniform systems could give rise to stable patterns when disturbed.

Such 'order from disturbance' has become the theoretical basis for all sorts of strange, repeated motifs seen in the natural world.

It was a good theory. So good, in fact, that decades later, scientists are still discovering stunning examples of it in unusual and exotic places: real-world Turing patterns brought to life in locales that Turing himself never had a chance to see.

The latest incarnation of this theoretical phenomenon turns out to be fairy circles – mysterious formations of desert grass that grow around distinctly circular patches of arid soil, first documented in the Namib desert of southern Africa. 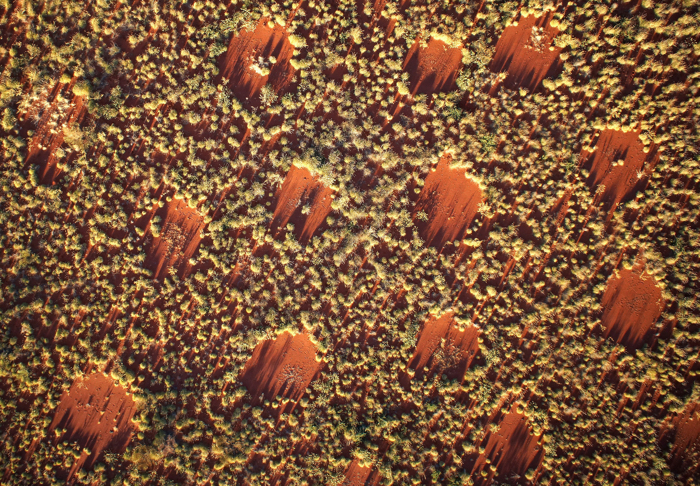 Explanations for their existence range from the mythical to the mundane, and as recently as a few years ago, their origins were still being debated. Early on, one view held that the strange circles were due to termite activity under the African soil – but the subsequent discovery of fairy circles in the Australian outback complicated the narrative, demonstrating fairy circles could be found with no firm link to termites.

Alternatively, scientists have proposed that fairy circles are the result of plants arranging themselves to make the most of limited water resources in a harsh, arid environment.

It sounds plausible, and if true, would also happen to be another naturally occurring example of a Turing pattern. But there's not a lot of empirical evidence to actually support the hypothesis, researchers say, because the kinds of physicists who tend to model the Turing dynamics of these systems rarely end up also conducting field work in the desert in support of their ideas.

"There is a strong imbalance between the theoretical vegetation models, their a priori assumptions and the scarcity of empirical proof that the modelled processes are correct from an ecological point of view," a team led by ecologist Stephan Getzin from the University of Göttingen in Germany explains in a new paper.

To bridge that gap, Getzin and fellow researchers walked the walk, using drones equipped with multispectral cameras to survey fairy circles from overhead near the mining town of Newman in the Pilbara region of Western Australia.

According to one of the team's hypotheses, a Turing pattern arrangement of fairy circles would be stronger among grasses with a greater dependency on moisture.

Analysing the spatial separation of both high- and low-vitality grasses, and using moisture sensors to check readings at the ground, the team found that healthier, high‐vitality grasses were systematically more strongly associated with fairy circles than low‐vitality grasses.

In other words, for the first time, we have empirical data to suggest that fairy circles are a match for Turing's decades-old theory.

"The intriguing thing is that the grasses are actively engineering their own environment by forming symmetrically spaced gap patterns," Getzin says.

"The vegetation benefits from the additional runoff water provided by the large fairy circles, and so keeps the arid ecosystem functional even in very harsh, dry conditions. Without the self-organisation of the grasses, this area would likely become desert, dominated by bare soil."

According to the researchers, the grasses that make up fairy circles grow together in a cooperative fashion, modulating their environment to better cope amidst the near-perpetual dryness of an extremely arid ecosystem.

The team says even more field work will be required to further validate the mathematical models, but for now, it looks like we might be closer than ever to closing the book on this mysterious phenomenon.

"By forming periodic gap patterns, the vegetation benefits from the additional water resource provided by the fairy circle gaps," the authors explain, "and thereby keeps the ecosystem functional at lower precipitation values compared with uniform vegetation."

The findings are reported in Journal of Ecology.