For the first time, physicists have demonstrated that a universe like ours with three spatial dimensions could actually host a naked singularity - an event so intense, the laws of physics would fall apart.

Until now, researchers have only been able to place naked singularities in five-dimensional universes, but by proving that they could theoretically exist in three spatial dimensions, these physicists have found something that could challenge Einstein's general theory of relativity.

If you're not familiar with naked singularities, think of them like a black hole that's been turned inside-out - if you could take all the strangeness that's inside a black hole, and expose it to the Universe as a naked entity, that's what we're talking about here.

No one's ever detected a naked singularity in our Universe, but these hypothetical regions in space are predicted to form when huge stars collapse at the end of their lives, resulting in literally infinite density - something that our laws of physics cannot handle.

That means if a black hole's unimaginably violent centre could potentially occur in open space, someone's going to have to explain why general relativity - something that's supposed to be universal - no longer applies.

"A naked singularity, if such a thing exists, would be an abrupt hole in the fabric of reality - one that would not just distort space-time, but would also wreak havoc on the laws of physics wherever it goes and lead to a catastrophic loss of predictability," Avaneesh Pandey from the International Business Times explains.

For decades, physicists thought that black holes and their mysterious internal singularities could exist in harmony with Einstein's general relativity due to something called the 'cosmic censorship conjecture.'

The basic idea is that whenever a singularity forms in the Universe, it will always be hidden away behind a black hole's event horizon, which means the laws of physics around the black hole can continue to function as normal.

"If true, cosmic censorship means that outside of black holes, these singularities have no measurable effect on anything, and the predictions of general relativity remain valid," Sarah Collins writes for Phys.org.

More recently, mathematical simulations of five-dimensional universes have predicted the existence of naked singularities that would throw the idea of cosmic censorship conjecture out the window.

That's not so bad - we've never even come close to finding another universe, especially one with five dimensions, so general relativity can go on its merry way.

Except that now UK physicists Toby Crisford and Jorge Santos from the University of Cambridge have simulated a universe with the same number of dimensions as our own, and lo and behold - it can host naked singularities too.

To be clear, the pair aren't saying they've simulated a naked singularity in our Universe per se - the universe they've simulated has three spatial dimensions and one time dimension like ours, but it's got a whole different shape.

While our Universe is thought to be fairly flat, Crisford and Santos's universe is 'saddle-shaped'.

General relativity allows for the existence of many differently shaped universes, and the pair worked with a specific type of curved universe called Anti-de Sitter space, as seen below: 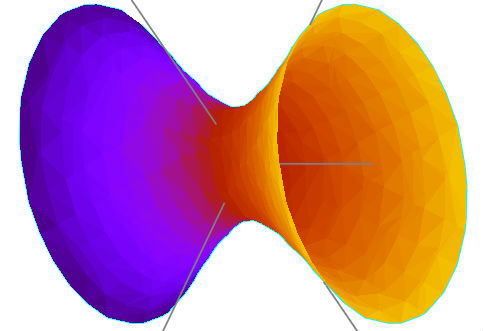 One particular feature of this saddle-shaped universe is a point of no return, where light is actually reflected back onto itself.

It's a bit like putting space-time in a box, and at the walls of this box, the physicists were able to force the formation of a singularity.

So what does this mean for us?

Well, the good news is that no one's been able to prove that naked singularities exist in our Universe, which is just as well, because black holes are bad enough company as it is - space-time in a box as it is - imagine those cataclysmic death traps without an event horizon.

But by demonstrating that naked singularities are actually possible in a universe like ours with three spatial dimensions, Crisford and Santos have a promising new set-up for us to find quantum gravity - something that could one day merge general relativity with quantum mechanics as a universal 'theory of everything'.

"The naked singularity we see is likely to disappear if we were to include charged particles in our simulation - this is something we are currently investigating," Santos told Phys.org.

It's heady stuff, but if the strangeness of naked singularities can help us finally fill the gaps in modern physics, we're glad they exist (in theory).