Given that a return trip to Venus would be about 30 to 50 percent shorter than a round ticket to Mars, you might wonder why so much scientific effort revolves around getting us to the Red Planet, rather than exploring the second planet from the Sun.

Consider this: the longest-lasting probe that made it to the surface of Venus survived for a grand total of 2 hours and 7 minutes before its circuits were fried. Nope, Venus's scorchingly hot, corrosive, and heavy atmosphere isn't exactly inviting – but new electronics developed by NASA could give us our best chance yet of studying this toxic hellhole up close.

Engineers at the space agency's Glenn Research Centre in Cleveland have come up with circuitry capable of lasting 100 times longer than previous Venus mission electronics.

That means we might finally have the technological basics for actually getting some long-lasting science done on the hottest planet in the Solar System, with an average surface temperature of 462° Celsius (863° Fahrenheit).

"If you look at Mars missions, there've been rovers on the surface getting all sorts of scientific data," NASA electronics engineer Philip Neudeck told Ryan F. Mandelbaum at Gizmodo.

"That dataset is totally missing from Venus, and that's because the electronics don't function on Venus."

While Venus's skies are made up of clouds of sulphuric acid, the real problem for sensors on the ground is the blistering surface temperature, along with the oppressively dense pressure of the planet's atmosphere.

Venus has a high-pressure carbon dioxide atmosphere, which offers more than 90 times the atmospheric pressure at Earth's surface. That means just standing on the surface of Venus would be comparable to the pressure you'd find 900 metres (3,000 feet) underwater on Earth.

With the dual challenges of insane pressure and scorching heat, regular electronics just wouldn't cut it on Venus, so previous Soviet missions to the surface have used thermal and pressure-resistant vessels equipped with hermetically sealed chambers to try to keep lander circuitry as cool as possible.

But the fact that 127 minutes was the survival record up until now – set by the Soviet Venera 13 probe in 1982 – shows a whole new approach is required. 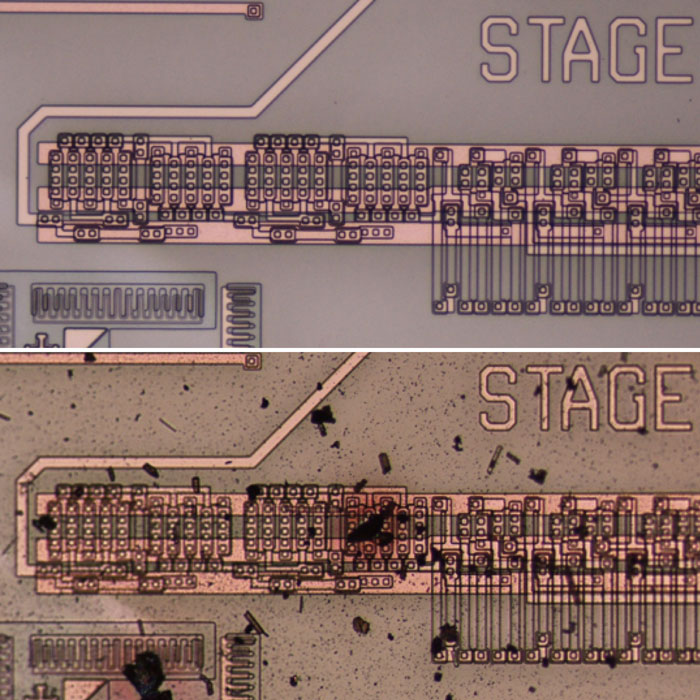 The integrated circuit before (above) and after (below) testing. Credit: NASA

Silicon carbide chips have very high heat resistance, whereas conventional silicon chips are only good up to about 250° Celsius (482° Fahrenheit) – at which point there's so much energy in the system that electrons behave erratically, meaning the silicon effectively ceases to function as a semiconductor.

To test the new circuitry, the researchers put a pair of the silicon carbide chips in the Glenn Extreme Environments Rig (GEER) – an 800-litre chamber that basically works like a hellish oven to accurately recreate the extreme heat and pressure of Venus's atmosphere.

The integrated circuits managed to withstand these pseudo-Venus conditions for 521 hours, a 100-fold improvement on previous tests.

"We demonstrated vastly longer electrical operation with chips directly exposed – no cooling and no protective chip packaging – to a high-fidelity physical and chemical reproduction of Venus' surface atmosphere," Neudeck says in a press release.

"And both integrated circuits still worked after the end of the test."

It's an impressive result, following on from previous NASA tests with similar silicon carbide integrated circuits, which showed the chips could survive more than 1,000 hours at 500° Celsius (932° Fahrenheit) with Earth's level of atmospheric pressure.

While NASA's current ambitions to explore Venus were put on hold recently in favour of other research missions, it's encouraging to know that studying this tantalising but terrifying planet is now at least technologically feasible.

"No one has ever made circuits run in this environment at this temperature for this long," Neudeck told Gizmodo.

"It really opens up a whole new way of doing Venus missions."

The findings are reported in AIP Advances.