NASA has just released a new image captured by the Hubble space telescope, revealing what it looked like moments before galactic clusters - cosmic structures that consist of many galaxies held together by gravity - smashed into each other.

The result of this cosmic collision of galaxy clusters was the formation of a new, massive structure called MACS J0416.1-2403 (or simply MACS J0416), that lies roughly 4.3 billion light-years from Earth in the constellation Eridanus.

Pictures of galactic clusters sometimes don't look real, because every single one of the tiny, stereotypically spiralled discs in the image above looks an awful lot like they were just Photoshopped haphazardly onto a black background.

But these images are completely real and also incredible, because each one of those galaxies contains billions of stars and countless planets, just like our own Milky Way contains the planets and stars of our Solar System.

To create the image above, which the team is calling the Cosmic Kaleidoscope, researchers combined data captured by three different telescopes set to capture individual parts of the sky.

As the team explains:

"This image of the cluster combines data from three different telescopes: the NASA/ESA Hubble Space Telescope (showing the galaxies and stars), the NASA Chandra X-ray Observatory (diffuse emission in blue), and the NRAO Jansky Very Large Array (diffuse emission in pink). Each telescope shows a different element of the cluster, allowing astronomers to study MACS J0416 in detail." 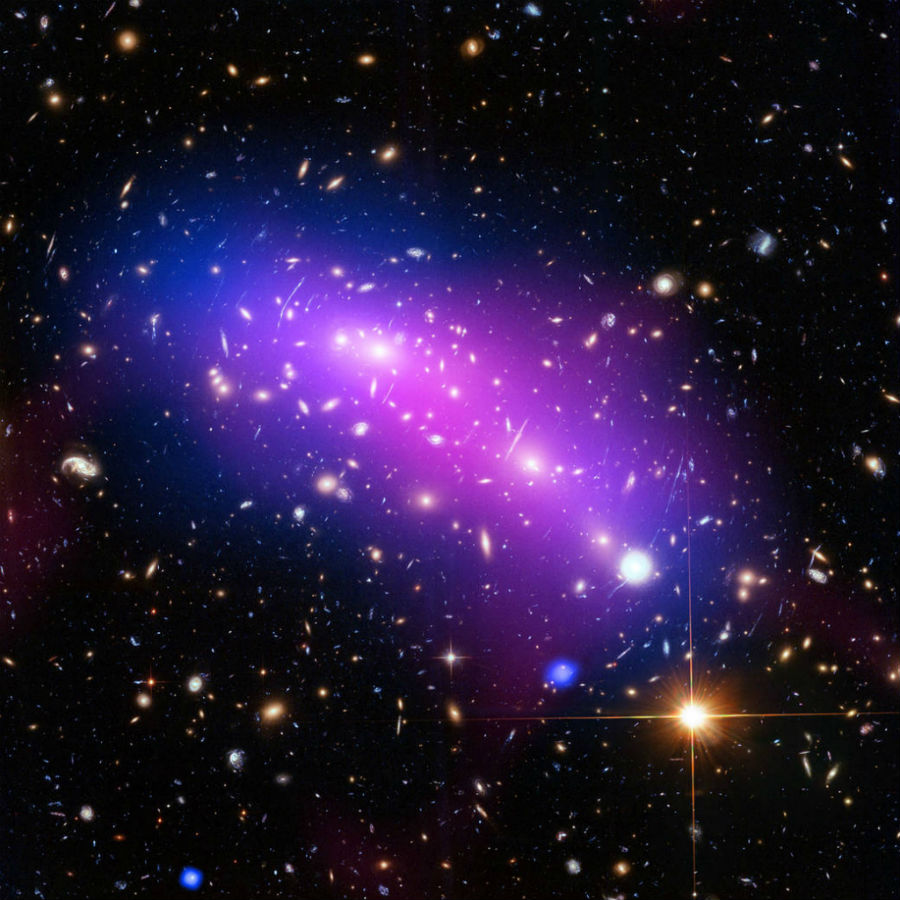 Though they appear interwoven, the two clusters have actually not smashed into each other yet, though it's clearly about to happen. The team knows this because if a collision would have already occurred, the cluster's dark matter and gas would have separated and the cluster wouldn't continue distorting the light from galaxies behind it so severely.

"In this image, this dark matter appears to align well with the blue-hued hot gas, suggesting that the two clusters have not yet collided; if the clusters had already smashed into one another, the dark matter and gas would have separated," the researchers report.

This 'gravitational lens' effect can amplify the light of faraway stars to make them appear larger, and also allow researchers to find extremely old objects that were created only a few million years after the Big Bang.

As the researchers explain, MACS J0416 is thought to contain a significant amount of dark matter, because it leaves a detectable imprint in visible light captured by our telescopes by distorting the images of background galaxies.

Studying and creating images like the Cosmic Kaleidoscope gives astronomers a unique look into the Universe's past that may one day help us better understand cosmic mysteries like dark matter and energy. And that's crucial, because dark matter and dark energy are thought to make up 95.4 percent of the known Universe.

Editor's note: We had previously used an incorrect image with this article - another galaxy image from 2006. We have amended the article with the correct image of MACS J0416 forming.