NASA Just Updated Earth's Most Iconic Portrait, And We Are as Lonely as Ever

On 14 February 1990, the Voyager 1 space probe shut down its cameras for the rest of eternity. A mere half hour before that, it recorded one final image.

Humanity now knows that picture as the Pale Blue Dot. Suspended in a beam of sunlight, Earth is a mere speck of blue set against the black nothingness of space. Never before had we seen our home world quite like this - so vulnerable and alone.

Thirty years after the original release, NASA's Jet Propulsion Laboratory (JPL) has published a new version of this iconic portrait of Earth, and it's as breathtaking as ever. 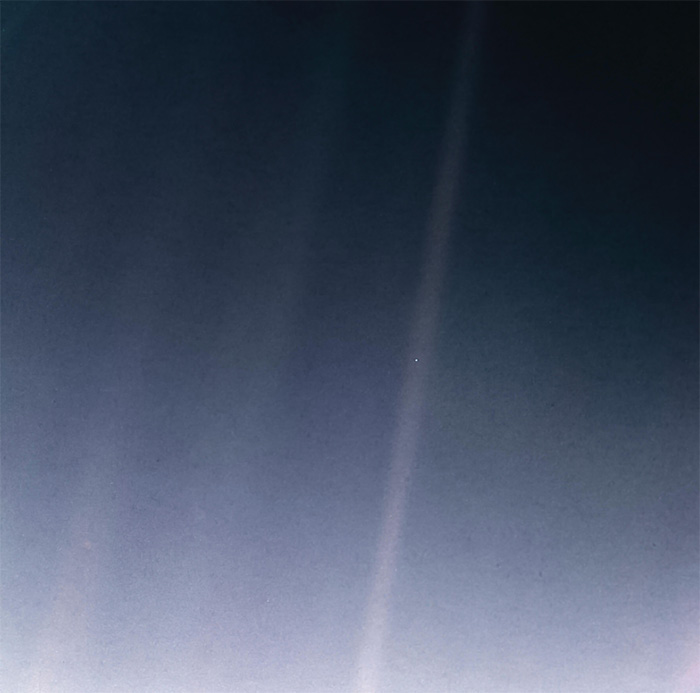 Yep. That tiny speck you can barely see, that's Earth. As legendary astronomer Carl Sagan once put it, "every human being who ever was, lived out their lives" on that tiny dust mote.

Earth is still barely larger than a crumb in this new release; the space probe was already so far from us when the image was captured, our planet occupied just 0.12 of a pixel. The Pale Blue Dot forms a part of the 'family portrait' Voyager 1 took of our Solar System - an endeavour that wasn't originally intended as part of the Voyager mission, but came to life thanks to a bright idea from Sagan, who saw the opportunity to capture our world floating in the great cosmic ocean.

"Our planet is a lonely speck in the great enveloping cosmic dark. In our obscurity, in all this vastness, there is no hint that help will come from elsewhere to save us from ourselves," he wrote in his 1994 book Pale Blue Dot.

For years, the Voyager 1 mosaic of our Solar System has been on display at JPL's Theodore von Kármán Auditorium. According to NASA, the photo of Earth keeps needing to be replaced - visitors can't help but want to touch it.

We can only hope that the renewed release of the Pale Blue Dot will inspire generations to come. It might be decades old, but its meaning is as important as ever.

"There is perhaps no better demonstration of the folly of human conceits than this distant image of our tiny world," wrote Sagan.

"To me, it underscores our responsibility to deal more kindly with one another, and to preserve and cherish the pale blue dot, the only home we've ever known."