NASA Might Have Just Spotted The Slowest Spinning Magnetar Ever

Astronomers working with NASA's Chandra X-ray Observatory have found evidence of an extremely dense, magnetised neutron star - or magnetar - at the centre of RCW 103, a dense cloud of dust left over from a supernova lying roughly 10,700 light-years away.

While the discovery of a magnetar is always awesome, the new evidence indicates that the star might rotate thousands of times slower than other magnetars, making it an incredibly unique find.

Astronomers were first drawn to the star, known as 1E 161348-5055 (or 1E 1613 for short), in June 2016. A team of researchers led by Antonino D'Aì, from Italy's National Institute of Astrophysics (INAF), picked up strange X-ray bursts coming from RCW 103 using NASA's Swift telescope.

These strange bursts were very similar to that of a magnetar - an extremely dense type of neutron star that can produce magnetic fields trillions of times stronger than our Sun's.

"Observers had previously agreed that 1E 1613 is a neutron star, an extremely dense star created by the supernova that produced RCW 103," NASA officials said. "However, the regular variation in the X-ray brightness of the source, with a period of about six and a half hours, presented a puzzle."

This discovery prompted another team of researchers, led by astronomer Nanda Rea from the University of Amsterdam in the Netherlands, to investigate further using NASA's Chandra X-ray Observatory and the Nuclear Spectroscopic Telescope Array (NuSTAR) - two space telescopes that can scan certain regions of space in search of specific bands of X-ray radiation.

Here's the composite image they created with the data: 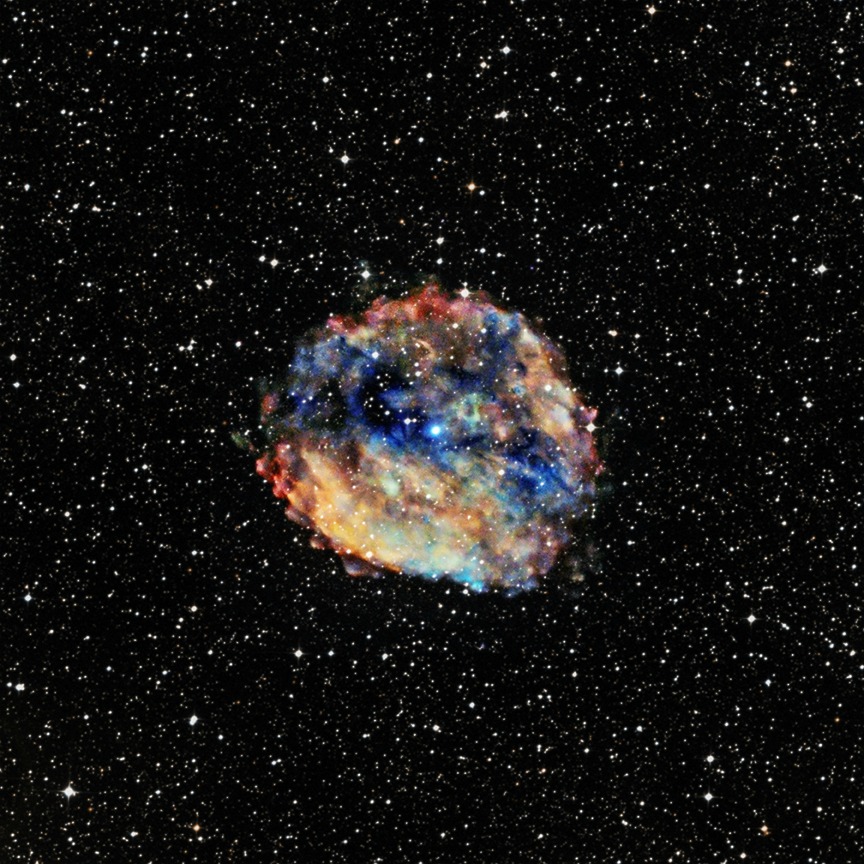 Based on their data, which included the relative amount of X-rays produced by the star and how it cooled down after the previously mentioned bursts, the team has concluded that 1E 1613 is likely a magnetar.

If their findings hold up after more scrutiny, this would make 1E 1613 the 30th magnetar ever found.

The researchers still have a mystery on their hands, though, because D'Aì's team also found that 1E 1613 - despite exhibiting many tell-tale signs of a magnetar - spins really, really slowly, which doesn't line up with previously accepted magnetar characteristics.

"The source is rotating once every 24,000 seconds (6.67 hours), much slower than the slowest magnetars known until now, which spin around once every 10 seconds. This would make it the slowest spinning neutron star ever detected," NASA officials said.

Right now, no one is sure what's causing the slow spin, though one of the most popular hypotheses is that debris from the supernova that created RCW 103 might have fallen into 1E 1613, making it slow down.

Normally, magnetars are thought to slow down as they age, but 1E 1613 is estimated to be only 2,000 years old - a mere newborn by astronomical standards - so that hypothesis, the team says, doesn't apply here.

It will take further investigation to get to the bottom of what's causing 1E 1613 to act so strangely compared to other magnetars. But the discovery of another magnetar on its own is enough to get excited about, because they are ridiculously rare and hard to spot.

Hopefully, with telescopes improving rapidly, we will one day understand more about 1E 1613 and other stars like it. Until then, at least we have a new awesome picture to hold us over.

Trending News
A New FRB Signal Has Buzzed Nearly 2,000 Times in Just Two Months, Raising a Mystery Space2 days ago
There's Trouble Bubbling Up in Newly Formed Alaskan Lakes, And Scientists Are Worried Environment3 days ago
Does IQ Decline as We Age? One Type of Intelligence Peaks in Your Twenties Humans4 days ago