What The Heck Is a Neutron Star?

As many as one in every hundred stars in the Milky Way is of the 'neutron' variety. These are objects so incredibly dense, their insides squeeze together until they start to resemble one huge atomic nucleus.

But it's an unusual atom, in that it's disproportionately made up of neutrons.

To understand where these neutrons come from, we need to step down through the layers of a neutron star and understand how the immense gravity affects the personal space of individual particles.

How are neutron stars formed?

Deep inside every star, a war rages. Gravity pulls in as heat generated by nuclear reactions pushes out to create a relatively stable ball of plasma.

Sooner or later, the nuclear ovens cool. For stars roughly 10 to 30 times the mass of our own Sun, the loss of heat sees its cooler outer gas sink rapidly under gravity's pull, building speed until it slams into the dense pile of hot iron that formed in its final moments.

The shockwave generates an enormous surge of energy, blasting a wave of hot gas and radiation into the cosmos in a type of supernova explosion. All that remains is the ball of iron at the core, one that's a little heavier than the Sun crammed into a space roughly 11 kilometers (6.8 miles) across and coated in a thin (about a meter thick) atmosphere of captured hydrogen and helium. 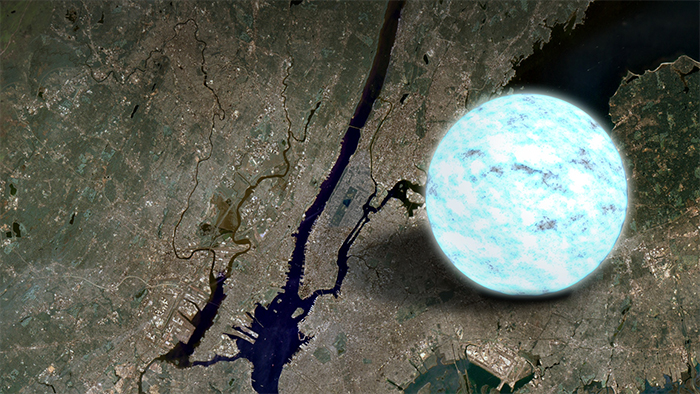 Gravity on this ball is as insane as it gets for an observable structure. Standing on the surface of this city-sized block of iron, you'd experience the pull of around 100 billion Gs of gravity.

Not that you'd be standing for very long.

Under your feet, some incredibly weird physics is taking place.

Intense pressure causes the iron's nuclei to fall into a vast crystalline structure dictated by the collective shoving of countless positive charges.

A haze of electrons buzzes freely through the gaps of this crystal, the intense pressure bringing them perilously close to the nuclei. Thanks to the laws of quantum physics, the crowded conditions means electrons have a higher chance of being found right inside a proton, turning the pair into a freshly baked neutron and a neutrino. Neutrons are a subatomic particle with mass similar to a proton but no electric charge, neutrinos are an almost massless neutral subatomic particle.

The itty-bitty neutrino is small enough to zip clear of the mass. But the neutron remains, forming strange isotopes with the mass of iron but far fewer protons.

What kind of atoms are there inside a neutron star?

Sinking even deeper into the structure we might find atoms so neutron-heavy, they begin to crumble. Theory suggests neutrons 'drift' apart in this mind-blowing space as a kind of thick gas, pushing apart under a pressure determined not by their charges but by the virtue of a rule that says identical particles of this nature can't occupy the same space at the same time.

Roughly a kilometer inside the dead star, this 'crust' now consists of a neutron fog, with occasional protons here and there. Nuclei are so close they can brush up against each other.

With gravity steadily increasing, once recognisable atomic structures form into exotic arrangements – reminiscent of different kinds of pasta like spaghetti and lasagne – shaped by a balance of the strong nuclear force and a touch of positive repulsion.

Right down in the very heart of neutron stars, physics gets weirder still. Forced into a paired arrangement, neutrons (and the rare proton that hasn't transformed) form new identities that allows them to break all kinds of previous laws, setting weird currents.

At the very center, it's possible gravity forces neutrons to lose all of their individuality, turning into a 'mush' of their primary particles, quarks.

Squeezed any tighter those quarks would also overlap one another, collapsing into a point so confined we don't have a way to model it. In other words, it would become a black hole.