NASA Scientists Say We Could Colonise The Moon by 2022... For Just $10 Billion

A lot of focus over the past 12 months has been on NASA's journey to Mars. But a group of space experts, including leading NASA scientists, has now produced a special journal edition that details how we could establish a human colony on the Moon in the next seven years - all for US$10 billion.

Although that's pretty awesome, the goal isn't really the Moon itself - from an exploratory point of view, most scientists have bigger targets in sight. But the lessons we'll learn and the technology we'll develop building a human base outside of Earth will eventually be the key to colonising Mars, and other planets, according to the experts.

"My interest is not the Moon. To me the Moon is as dull as a ball of concrete," NASA astrobiologist Chris McKay, who edited the special, open-access issue of New Space journal, told Sarah Fecht over at Popular Science. "But we're not going to have a research base on Mars until we can learn how to do it on the Moon first. The Moon provides a blueprint to Mars."

The journal articles came out of a workshop held back in August 2014, when some of the greatest minds in space research and business were brought together to explore and develop low-cost options for building a human settlement on the Moon.

We haven't gone back to the Moon since 1972 simply because of how expensive it is - the Apollo program that put the first humans on the lunar surface would have cost US$150 billion by today's standards, Fecht reports. And with a budget of US$19.3 billion for the whole of 2016, NASA hasn't been able to consider the Moon as well as Mars.

But thanks to new technology, it no longer has to be that way.

"The US could lead a return of humans to the surface of the Moon within a period of 5-7 years from authority to proceed at an estimated total cost of about $10 billion (±30 percent)," conclude NASA's Alexandra Hall and NextGen Space's Charles Miller in one of the papers.

As Jurica Dujmovic notes for MarketWatch, that's cheaper than one US aircraft carrier.

"The big takeaway," McKay told Popular Science, "is that new technologies, some of which have nothing to do with space - like self-driving cars and waste-recycling toilets - are going to be incredibly useful in space, and are driving down the cost of a moon base to the point where it might be easy to do." 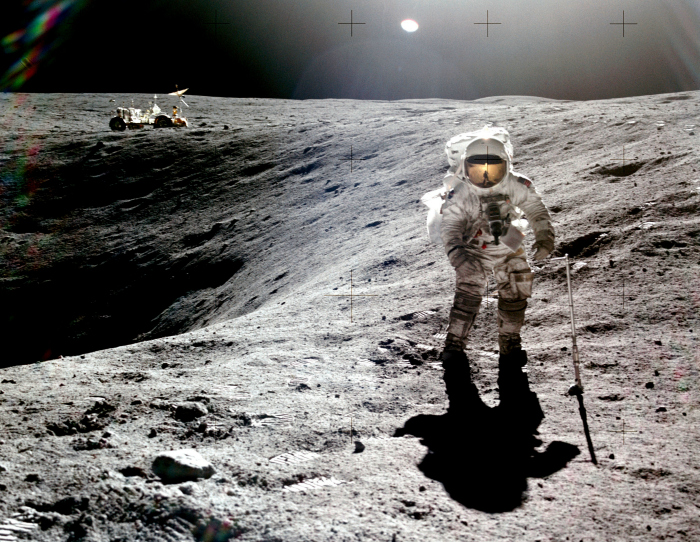 According to the research papers, the lunar base would house around 10 people for stays of up to a year at first - and could eventually grow to a self-sufficient settlement of 100 within a decade.

They'd get to the Moon on SpaceX's soon-to-be-launched Falcon Heavy, and while they'd have to take quite a lot of equipment on the first trip, 3D printing could be used to produce pretty much everything else once they get there.

The colony would most likely be established on the outer rim of one of the Moon's poles, which receive more sunlight than the rest of the surface, so would help keep solar-powered equipment running. As Marketwatch reports:

"Furthermore, all that energy could provide power for robots that would excavate large amounts of ice detected within the craters. Water gathered that way could then be used for life support, as well as for providing oxygen, or it could be processed into rocket fuel, which would be sold or stored for refuelling space crafts."

The astronauts would probably live in the something similar to Bigelow Aeropsace's inflatable habitat, the researchers write, which is radiation resistant and would allow for a range of living areas, as well as easy storing and transport.

It could also provide protected habitats for basic crops, which would be fertilised with the help of a toilet that recycles human waste into energy, clean water, and nutrients, such as the Gates Foundation-funded blue toilet.

The rest of the food and supplies for 10 people that couldn't be grown and 3D printed on the Moon could be shipped by SpaceX for less than US$350 million per year using the reusable Falcon 9 rocket.

It all sounds amazing, but the elephant in the room is the fact that the US$10 million establishment cost is more than NASA's existing space flight budget of US$3-4 billion per year. But assuming setting up the colony is a flat fee, it's definitely still affordable and could run alongside plans to Mars, the scientists write.

And things could get even cheaper if commercial service providers are involved, which would then be prime position to sell propellant from the Moon's orbit to NASA and any other space agencies trying to get humans to Mars.

All of the papers in the special edition of New Space are freely available online for you to peruse and use to plan your future in space. Get dreaming, because it's closer than you think.

"It is time to go back to this Moon, this time to stay," concludes the journal's preface. "and funding is no longer the main hurdle."