Back in February, footage from NASA's Dawn spacecraft revealed something strange on the dwarf planet Ceres - two white patches reflecting brightly in the middle of a huge, dark crater.

The first assumption was that they were big patches of ice, but the wavelengths of light they're reflecting didn't quite match up. Dawn has since entered the orbit of Ceres and taken a whole lot more incredibly detailed images of the planet's fascinating surface. But each set is just triggering more questions than it can answer.

The largest object in the asteroid belt, Ceres is the original dwarf planet. But despite the fact that it was discovered more than 200 years ago, we still know very little about its origins and geology - which is why NASA sent Dawn to check things out.

The latest image captured by the spacecraft is three times more detailed than the last batch of photos sent back to Earth, and was taken from an altitude of less than 1,600 km from the dwarf planet's surface. You can see it in all its glory below, and high res here: 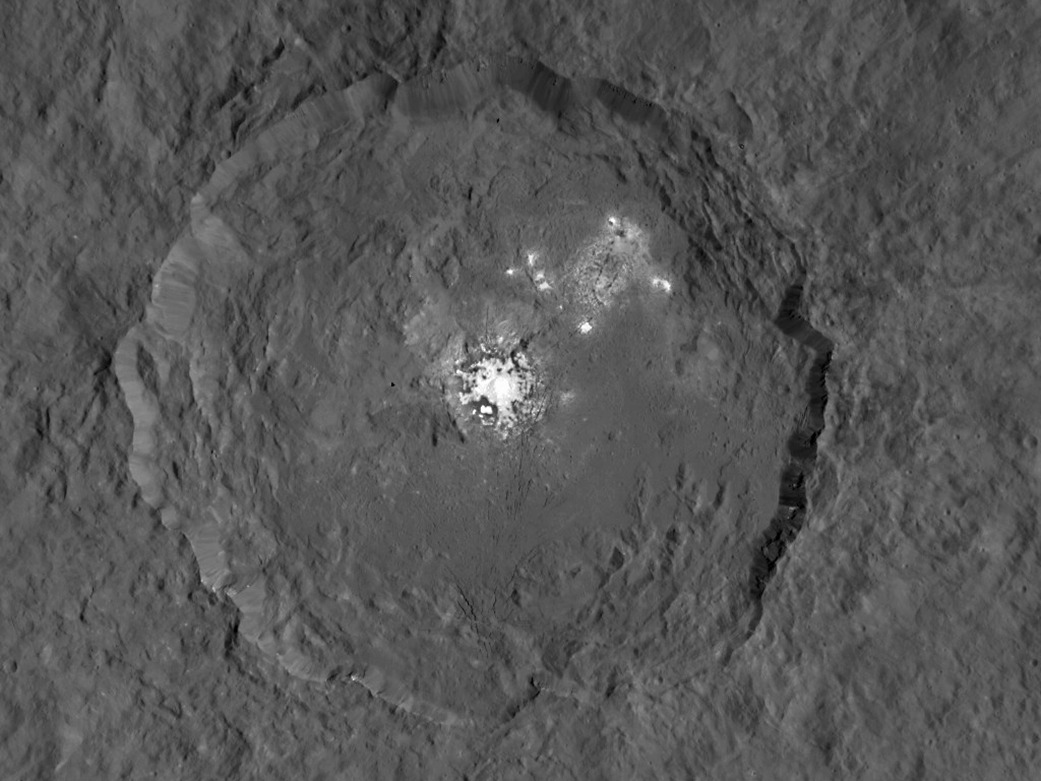 But despite the incredible detail, they image doesn't help to explain the two white patches, which are found inside Ceres' 4-km-deep Occator crater, other than to confirm that they don't fit the pattern of ice. The data so far show that the amount of light the spots are reflecting is lower than would be expected for ice on the planet.

"The science team is continuing to evaluate the data and discuss theories about these bright spots at Occator," said Chris Russell, Dawn's principal investigator from the University of California, Los Angeles. "We are now comparing the spots with the reflective properties of salt, but we are still puzzled by their source. We look forward to new, higher-resolution data from the mission's next orbital phase."

Other options could be that it's some type of super-reflective rock layer that's been exposed in the crater, or the spots might even be the results of volcanic activity or a geyser. The scientists have so little to go on right now that they're even letting the public cast their vote on what the spots might be.

But the appearance of these spots isn't the only weird thing on Ceres, with a strangely tall, cone-shaped mountain on the other side of the planet also confusing NASA scientists.

It's not the height of the mountain, which is an impressive 6 km tall, that's bothering them so much, but the fact that the land around the structure is completely flat. They also can't work out why one side of is streaked with light patches, while the other is dark. "This mountain is among the tallest features we've seen on Ceres to date," said another Dawn scientist, Paul Schenk. "It's unusual that it's not associated with a crater. Why is it sitting in the middle of nowhere? We don't know yet, but we may find out with closer observations."

The reason researchers are so fascinated in all of this is because we have no understanding of the geological processes that have formed Ceres so far, and any clues could provide us with a lot of answers about the formation of our Solar System as a whole.

"Dawn has transformed what was so recently a few bright dots into a complex and beautiful, gleaming landscape," said Marc Rayman, Dawn's chief engineer and mission director. "Soon, the scientific analysis will reveal the geological and chemical nature of this mysterious and mesmerising extraterrestrial scenery."

Dawn is going to continue to get closer and closer to Ceres as the spacecraft remains in orbit, so we can expect more detailed images in the months to come. Hopefully some of those will provide us with some answers… or just some other really cool curiosities to marvel at. Either way, we're happy.

In the meantime, take a flyby tour over Ceres' oddities - and if you've got 3D glasses lying around, now is the time to use them: