NASA Is on a Mission to Reclaim Lost Moondust. And Some Cockroaches

A close-up of the moondust. (RR Auction)

NASA has requested the safe return of moondust and cockroach samples that were scheduled to be sold in a private auction that ended June 23.

Earlier this month, the space agency contacted RR Auction, a Boston-based auction house, to stop the sale of moondust that was collected by astronauts during the 1969 Apollo 11 mission.

Shortly after the lunar dust was brought back to Earth in 1969, NASA sent some samples to a University of Minnesota (UM) researcher, who experimented with feeding the moondust to cockroaches "to determine if the lunar rock contained any sort of pathogen that posed a threat to terrestrial life," The Washington Post reported.

In a letter dated June 15, a lawyer for NASA stated that the samples – which included a vial of approximately 0.0014 ounce (40 milligrams) of dust from the Moon, the remains of three cockroaches, and dozens of microscope slides – still belong to the federal government.

The motley lot of goods, which the auction house advertised as "a one-of-a-kind Apollo rarity", was expected to fetch an impressive US$400,000 at auction. 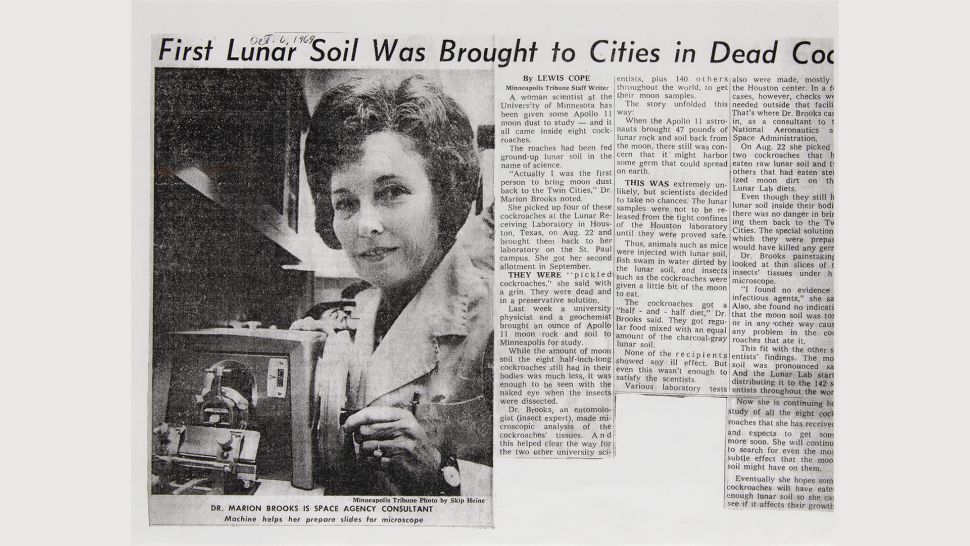 The letter noted that "all Apollo samples, as stipulated in this collection of items, belong to NASA and no person, university, or other entity has ever been given permission to keep them after analysis, destruction, or other use for any purpose, especially for sale or individual display".

NASA further requested that RR Auction immediately cease accepting bids for the lot and that it "no longer facilitate the sale of any and all items containing the Apollo 11 Lunar Soil Experiment".

The vial of moondust in the auction lot is just a fraction of what astronauts Neil Armstrong and Buzz Aldrin collected during their Moon landing: approximately 47 pounds (21.3 kilograms) of lunar rock.

Of that, about 4.5 pounds (2 kg) went to UM scientists at the university's Lunar Receiving Laboratory, where researchers analyzed how exposure to the dust affected insects, aquatic life, and microbes, according to the auction listing.

"Some animals were inoculated with dust, some received portions mixed with their food or water, and others walked or crawled through dust spread around the bottom of their containers," according to an article published in 1970 in the journal Minnesota Science.

The dust sample offered at auction was originally in the care of Marion Brooks, a UM entomologist who tested the dust by feeding it to cockroaches.

According to an article published 6 October 1969, in the Minneapolis Tribune (now the Star Tribune) and reproduced in the auction listing online, Brooks fed the cockroaches a "half-and-half diet [containing] regular food mixed with an equal amount of the charcoal-gray lunar soil".

The Minnesota Science article reported that none of the animals in the experiments "suffered any harm from the lunar dust".

However, instead of returning the samples to NASA upon conclusion of her research, Brooks displayed them in her home, and her daughter sold them several years after her mother's death in 2007. RR Auction is conducting the current sale on behalf of an anonymous consignor, according to The Washington Post.

Mark Zaid, an attorney for the auction house, told The Washington Post that RR Auction is working with NASA regarding the agency's request.

Astronauts can no longer commit crimes on the moon, Canada decrees