The True Origins of Gold in Our Universe May Have Just Changed, Again

When humanity finally detected the collision between two neutron stars in 2017, we confirmed a long-held theory - in the energetic fires of these incredible explosions, elements heavier than iron are forged.

And so, we thought we had an answer to the question of how these elements - including gold - propagated throughout the Universe.

But a new analysis has revealed a problem. According to new galactic chemical evolution models, neutron star collisions don't even come close to producing the abundances of heavy elements found in the Milky Way galaxy today.

"Neutron star mergers did not produce enough heavy elements in the early life of the Universe, and they still don't now, 14 billion years later," said astrophysicist Amanda Karakas of Monash University and the ARC Centre of Excellence for All Sky Astrophysics in 3 Dimensions (ASTRO 3D) in Australia.

"The Universe didn't make them fast enough to account for their presence in very ancient stars, and, overall, there are simply not enough collisions going on to account for the abundance of these elements around today."

The first stars formed as gravity pulled together clumps of these materials. In the nuclear fusion furnaces of their cores, these stars forged hydrogen into helium; then helium into carbon; and so on, fusing heavier and heavier elements as they run out of lighter ones until iron is produced.

Iron itself can fuse, but it consumes huge amounts of energy - more than such fusion produces - so an iron core is the end point.

"We can think of stars as giant pressure cookers where new elements are created," Karakas said. "The reactions that make these elements also provide the energy that keeps stars shining bright for billions of years. As stars age, they produce heavier and heavier elements as their insides heat up."

But it needs to happen really quickly, so that radioactive decay doesn't have time to occur before more neutrons are added to the nucleus.

We know now that the kilonova explosion generated by a neutron star collision is an energetic-enough environment for the r-process to take place. That's not under dispute. But, in order to produce the quantities of these heavier elements we observe, we'd need a minimum frequency of neutron star collisions.

To figure out the sources of these elements, the researchers constructed galactic chemical evolution models for all stable elements from carbon to uranium, using the most up-to-date astrophysical observations and chemical abundances in the Milky Way available. They included theoretical nucleosynthesis yields and event rates. 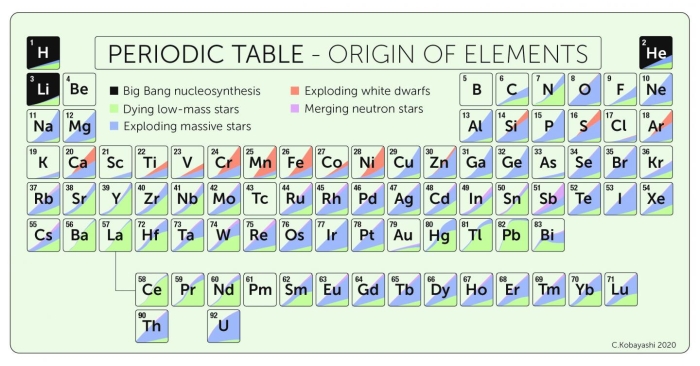 They laid out their work in a periodic table that shows the origins of the elements they modelled. And, among their findings, they found the neutron star collision frequency lacking, from the early Universe to now. Instead, they believe that a type of supernova could be responsible.

These are called magnetorotational supernovae, and they occur when the core of a massive, fast-spinning star with a strong magnetic field collapses. These are also thought to be energetic enough for the r-process to take place. If a small percentage of supernovae of stars between 25 and 50 solar masses are magnetorotational, that could make up the difference.

"Even the most optimistic estimates of neutron star collision frequency simply can't account for the sheer abundance of these elements in the Universe," said Karakas. "This was a surprise. It looks like spinning supernovae with strong magnetic fields are the real source of most of these elements."

Previous research has found a type of supernova called a collapsar supernova can also produce heavy elements. This is when a rapidly rotating star over 30 solar masses goes supernova before collapsing down into a black hole. These are thought to be much rarer than neutron star collisions, but they could be a contributor - it matches neatly with the team's other findings.

"Apart from hydrogen, there is no single element that can be formed only by one type of star," explained astrophysicist Chiaki Kobayashi of the University of Hertfordshire in the UK.

This doesn't necessarily mean that the estimated 0.3 percent of Earth's gold and platinum traced back to a neutron star collision 4.6 billion years ago has a different origin story. It's just not necessarily the whole story.

But we've only been detecting gravitational waves for five years. It could be, as our equipment and techniques improve, that we find neutron star collisions are much more frequent than we think they are at this current time.

Curiously, the researchers' models also turned out more silver than observed, and less gold. That suggests something needs to be tweaked. Perhaps it's the calculations. Or perhaps there are some aspects of stellar nucleosynthesis that we are yet to understand.