From continuing observations of a neutron star collision we caught last year, astrophysicists have found something wild - the crash spewed forth a thin jet of superfast particles into space, travelling at nearly the speed of light, but appearing to move much faster thanks to an optical illusion.

The collision was observed in August of last year, when a gravitational wave detection alerted astronomers around the world to an imminent event.

A huge number of telescopes were trained on the location - and, for the first time, scientists saw two neutron stars colliding in a galaxy 130 million light-years away, taking observations in both gravitational wave and electromagnetic wave astronomy, which includes radio waves, X-rays, gamma rays, and visible light.

The event was absolutely unprecedented; since then, space scientists have been avidly watching the newly formed object to try and figure out what it is, and what it's going to do next.

Through these continuing observations using a continent-wide array of radio telescopes, astrophysicists have located the relativistic jet that, according to theorists, was a requirement for the type of gamma-ray burst emitted by colliding neutron stars.

"We measured an apparent motion that is four times faster than light," said astrophysicist Kunal Mooley of the National Radio Astronomy Observatory (NRAO) and Caltech.

"That illusion, called superluminal motion, results when the jet is pointed nearly toward Earth and the material in the jet is moving close to the speed of light."

Computer simulations had revealed in June that this jet should exist, at an angle of 30 degrees from Earth. It would be relatively narrow, which would explain the initial faintness of the accompanying gamma-ray burst - its viewing angle made it difficult to observe.

Those predictions were almost right, according to the new data.

"Based on our analysis, this jet most likely is very narrow, at most 5 degrees wide, and was pointed only 20 degrees away from the Earth's direction," said astrophysicist Adam Deller of the Swinburne University of Technology in Australia, and formerly of the NRAO.

"But to match our observations, the material in the jet also has to be blasting outwards at over 97 percent of the speed of light."

When the neutron stars collided, a cloud of material bloomed out around the event's epicentre. The new object that the two neutron stars formed inside this sphere of debris - either a really large neutron star, or a really small black hole - would have gravitationally attracted nearby material, pulling it into an accretion disc, like water swirling a drain.

But the afterglow emissions from the merger were peculiar. They started late, peaked about 150 days after the merger, then rapidly petered out. Scientists have searched for an explanation, with hypotheses including a "choked" jet that was unable to escape the debris, and a successful jet, which dispersed energy into the debris as it did escape. 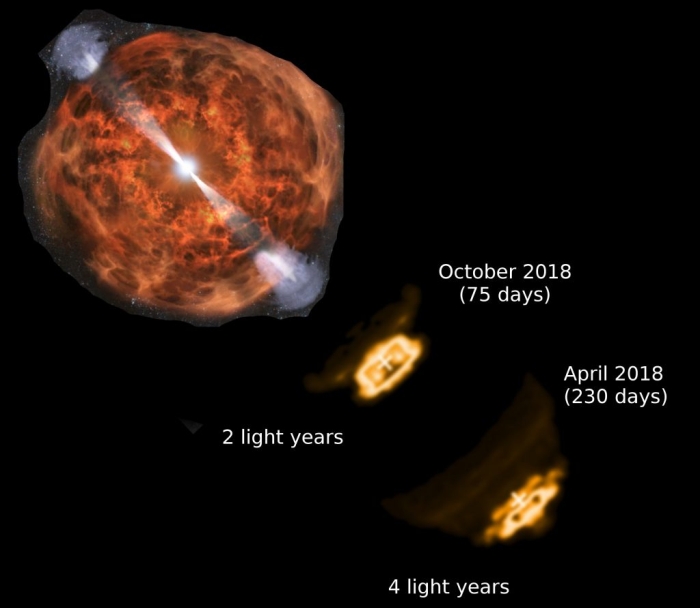 The team's data indicated that what actually happened was a combination of both of these scenarios. The jet initially pushed the debris shell outwards, creating an expanding cocoon of material. But this material didn't move as fast as the jet, so eventually the jet broke free.

According to the team's observations, therefore, prior to 60 days after the merger, the cocoon dominated the radio emission. After that point, the narrow jet took over.

The discovery is an important one, strengthening the connection between neutron star mergers and short-duration gamma-ray bursts.

"The merger event was important for a number of reasons, and it continues to surprise astronomers with more information," said Joe Pesce, NSF Program Director for NRAO.

"Jets are enigmatic phenomena seen in a number of environments, and now these exquisite observations in the radio part of the electromagnetic spectrum are providing fascinating insight into them, helping us understand how they work."