It would be extremely optimistic to suggest that we have a good handle on dark matter. But even the slight grasp we do have may be missing something important.

New observations from the Hubble Space Telescope have found much higher concentrations of dark matter than expected in some galaxies, by over an order of magnitude.

These concentrations are inconsistent with theoretical models, suggesting that there's a big gap in our understanding - the simulations could be incorrect, or there could be a property of dark matter we don't fully understand, according to the research team.

"We have done a lot of careful testing in comparing the simulations and data in this study, and our finding of the mismatch persists," said astrophysicist Massimo Meneghetti of the National Institute for Astrophysics in Italy.

"One possible origin for this discrepancy is that we may be missing some key physics in the simulations."

Dark matter is one of the biggest thorns in our understanding of the Universe. Simply put, we don't know what it is. It does not absorb, reflect, or emit any electromagnetic radiation, making it completely undetectable in a direct way. However, it does interact with the Universe's visible matter via gravity.

This means we can study how things like galaxies and stars are distributed and move around the Universe, calculate the gravity required to produce those distributions and movements, and calculate and subtract the gravity produced by the visible matter.

One of the ways we can indirectly 'detect' dark matter is through gravitational lensing. Really massive objects, like clusters of galaxies, create such an intense gravitational field that spacetime itself curves - which means any light travelling through that spacetime moves on a curving path.

So, objects on the far side of that gravitational field, such as distant galaxies, appear to us magnified, smeared, duplicated, and distorted. 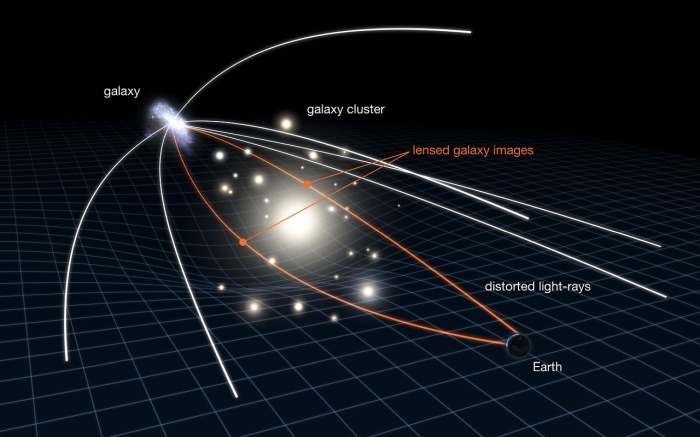 And that's what Meneghetti and his team were doing, looking at observations of 11 galaxy clusters using the Hubble Space Telescope and the European Southern Observatory's Very Large Telescope in Chile.

"Galaxy clusters are ideal laboratories to understand if computer simulations of the Universe reliably reproduce what we can infer about dark matter and its interplay with luminous matter," he explained.

To check their findings, the team conducted spectroscopic observations of the galaxies, using the shift of light to calculate the velocity of the orbiting stars - a classic tool for measuring dark matter.

And they double-checked their distance calculations, because that can make a crucial difference to dark matter calculations.

Well, we don't know. But it's going to be an exciting journey of discovery.

"To me personally, detecting a gnawing gap - a factor of 10 discrepancy in this case - between an observation and theoretical prediction is very exciting," said astrophysicist Priyamvada Natarajan of Yale University.

"A key goal of my research has been testing theoretical models with the improving quality of data to find these gaps. It's these kinds of gaps and anomalies that have often revealed that either we were missing something in the current theory, or it points the way to a brand-new model, which will have more explanatory power."

Either way, discovering what's causing the discrepancy between simulation and observation is likely to lead us to a stronger understanding of dark matter.