This New Fossil Discovery Is Changing Our Understanding of Ape Evolution

There aren't a lot of ape species left alive today, but the ones that are still here all look incredibly different - from the lesser apes, such as gibbons, all the way to the great apes, which includes orangutans, gorillas, and humans.

How and when we all evolved has long been a mystery, but scientists in Spain have just discovered a new small-bodied hominoid species that sits right at the root of our family tree. And it's shaking up everything we thought we knew about our last common ancestor, because it more like a gibbon, and less like a great ape, than scientists had ever conceived.

"The origin of gibbons is a mystery because of the lack of fossil record, but until now most scientists thought that their last common ancestor with hominids must have been large, because all of the undoubted fossil hominoids found so far were large-bodied," said lead researcher David M. Alba from the Institut Català de Paleontologia in Barcelona. "This find overturns everything."

The new species has been named Pliobates cataloniae, and its remains were discovered in northern Spain, where it lived around 11.6 million years ago. But to explain why the find is so exciting, we first need to explain a bit about the complex ape family tree.

Collectively, the living apes are known as the hominoids, a group that's split into two families: the small-bodied lesser apes - officially the Hylobatidae family - and the larger-bodied great apes - the Hominidae.

What both branches have in common is the fact that all species - ourselves included - are tail-less, have an upright posture, and have several cool cranial traits not seen in other primate species.

So far, so simple, right? But things haven't been so clear when trying to work out what our last common ancestor looked like. From molecular evidence we can surmise that it was a species that lived in Africa around 15 to 20 million years ago.

But while we've found plenty of fossils of large-bodied primates that appear to be related to us, and slot nicely into that family tree, all the small apes we've found have been incredibly primitive. So it's generally been assumed that we hominoids evolved from a species that looked something like a gorilla, and that the lesser ape family, which only includes gibbons and the siamang, was a specialised lineage that had branched off from us at some point.

And that's why this new discovery is so exciting, because it shows for the first time a small-bodied ape ancestor that has all the features of modern apes, and it suggests that our last common ancestor might have been way more gibbon-like than previously thought.

The analysis was based on 70 fossils found in the Can Mata landfill in northern Spain back in 2011. Although not a complete skeleton, the remains gave researchers a pretty good idea of what Pliobates might have looked like and how it lived. The evidence suggests that it lived on soft, ripe fruit, and climbed cautiously though the canopy, just like modern gibbons. It also places the species firmly in its very own, brand new genus. 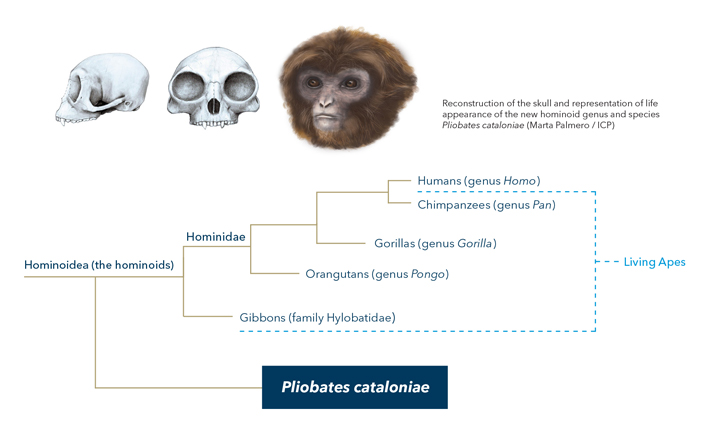 And after conducting a phylogenetic analysis of more than 300 different characteristics, the scientists found that this new species belongs right down at the base of the hominoid family tree - very, very close to the last common ancestor of all apes. Which would suggest that it inherited its gibbon-like looks from that ancestor, too.

Of course, there's the possibility that Pliobates is an anomaly in its own right, and so further fossil analysis will be required to lock down its place in our family tree. But for now, it sure does throw a spanner in the works.