In July of 2015, NASA's New Horizons probe made history when it became the first mission ever to conduct a close flyby of Pluto.

This was followed by the spacecraft making the first-ever encounter with a Kuiper Belt Object (KBO) – known as Arrokoth (AKA 2014 MU69) – on 31 December 2018. In addition, its unique position in the outer Solar System has allowed astronomers to conduct rare and lucrative science operations.

This has included parallax measurements of Proxima Centauri and Wolf 359, the two closest stars to the Solar System.

The study, which was recently accepted for publication by The Astrophysical Journal, was led by Tod R. Lauer of the NOAO. He was joined by Alan Stern (the PI of the New Horizons mission) and researchers from the SwRI, NASA, the Johns Hopkins University Applied Physics Laboratory (JHUAPL), the Space Telescope Science Institute (STSI), the Lunar and Planetary Institute (LPI), the SETI Institute, and multiple universities and institutions.

Put simply, the COB is the light from all sources outside the Milky Way that is spread diffusely throughout the observable Universe.

In this sense, it is the visible light analogue of the Cosmic Microwave Background (CMB), and is an important benchmark for astronomers. By measuring this light, they are able to discern the locations of stars, the size and density of galaxies, and test theories about the structure and formation of the cosmos.

Accurately measuring the COB is important for several reasons. For starters, this background is integral to the history of star formation, star clusters, galaxies, black holes, galaxy clusters, and the large scale structure of the Universe.

Therefore, knowing exactly how dark the night sky is can provide insight into the formation and evolution of the Universe.

In addition, astronomers have sought to determine if there was a diffuse component to the COB (dCOB), a source of photons not associated with any currently known objects.

The presence of such a component would allow astronomers to test how much of the cosmic background light could be coming from objects in the low-density regions of the Universe, or objects that formed prior to the Universe organizing into its current patterns.

A dCOB could also reflect the production of photons by more exotic processes, such as the annihilation or decay of dark matter particles – therefore assisting in the ongoing search for this "invisible" mass.

Unfortunately, these types of studies present numerous challenges since Earth-based telescopes are subject to atmospheric distortion and space-based telescopes have to deal with interference from Zodiacal Light. 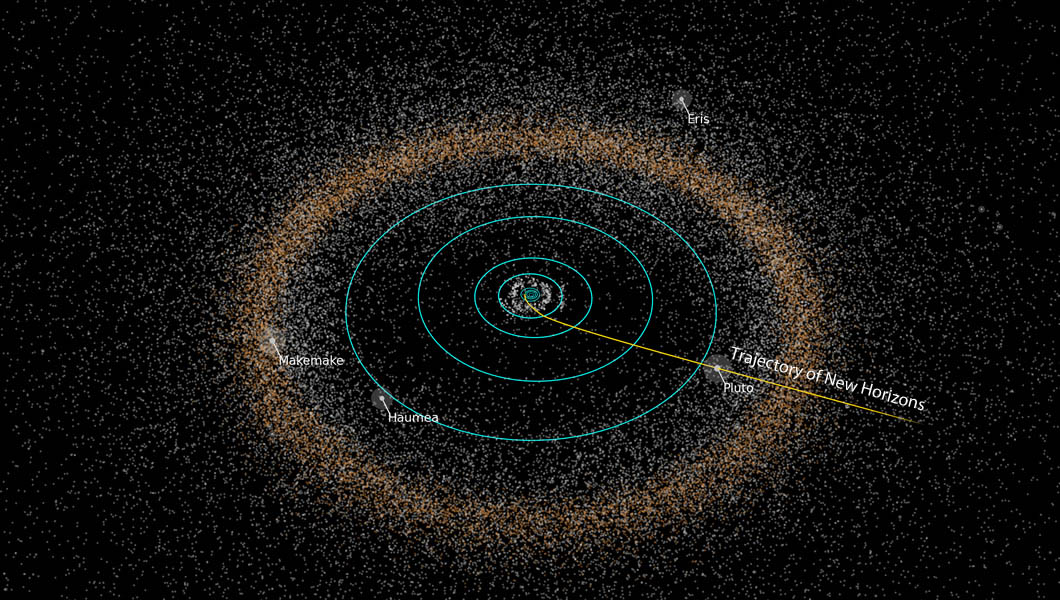 The trajectory of the New Horizons probe, which has taken it past Pluto and into the Kuiper Belt. (NASA/JHUAPL)

As a result, there have been serious discrepancies in the inferred brightness of the optical background over time.

But for spacecraft in the outer Solar System, these types of interference are not a problem. Hence why astronomers have relied on all previous missions that ventured beyond Neptune to conduct COB measurements – i.e. the Pioneer 10/11 and Voyager 1/2 missions.

Similarly, the Hubble Space Telescope also conducted measurements of the COB, but these were limited compared to what New Horizons was able to witness.

As Lauer, who is a former member of the Hubble Wide Field and Planetary Camera team, told Universe Today via email:

"NH can cleanly measure the total light flux emitted by the distant Universe. The Hubble is superb at adding up all the distant galaxies, but does less well for stuff not in galaxies that makes a diffuse background, which gets tangled up with the scattered sunlight bounced around by dust in the near Earth environment."

Interestingly, this is not the first time that astronomers have used LORRI data to measure the COB.

In 2017, a NASA-led team examined LORRI data from four different isolated sky fields that were imaged between 2007 and 2010. This coincided with the NH's cruise phase where it passed between the orbits of Jupiter and Uranus. 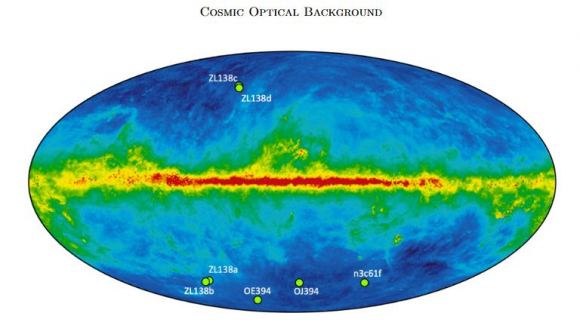 The location of the seven LORRI fields used in this work. (Lauer et al., arXiv, 2020)

For the sake of this study, Lauer and his team examined brightness levels observed by LORRI of seven high galactic latitude fields when the New Horizons mission was 42 to 45 AU from the Sun.

At this distance, the average raw light levels were 10 times darker than what Hubble was able to observe. After correcting for any remaining interference, the team ran a Monte Carlo simulation to model potential sources of light.

As Lauer and his colleagues concluded, this would suggest that the current census on faint galaxies falls short and at least half of those with an apparent magnitude level of 30 or more are unaccounted for.

This is not the first instance in recent years when the galactic census has had to be revised. Until a few years ago, astronomers were of the general consensus that there were 200 billion galaxies in the observable Universe.

This was based on the Hubble Ultra Deep Field observation campaign, from which astronomers created detailed 3D maps of the Universe.

But on revised calculations in 2016, astronomers now estimate that there are as many as two trillion galaxies in the observable Universe. Based on these latest results, it appears as though the count might need to be updated again.

Regardless, the work of Lauer and his colleagues demonstrates the utility of missions like New Horizons and the kinds of research they can perform in the outer Solar System.