When thrust into Earth's orbit for an extended stay in space, astronauts don't just experience an array of physical changes - space travel can have many mind-altering effects on a person, and frequent hallucinations are unnervingly common.

So imagine what it would feel like to be floating 400 km (250 miles) above the surface of our planet, staring into the void of space, and for a split second, you thought you saw an unexplained flash of bright blue light, or vast branches of what looks like upside-down lightning piercing the darkness.

In the early Apollo missions, astronauts kept seeing regular flashes or streaks of light in space that were gone as quickly as they appeared.

Even as recently as 2012, astronaut Don Pettit described these experiences as "flashes in my eyes, like luminous dancing fairies" that would appear "in the dark confines of my sleep station, with the droopy eyelids of pending sleep".

While these flashes have been explained as hallucinations caused by exposure to the cosmic rays of outer space, sometimes those fleeting, eerie flashes of light really do exist in the darkness.

For decades, astronauts have reported seeing distinct red and blue flashes lighting up the void of space. Pilots have even claimed to see the phenomenon in the sky above Earth's thunderclouds, referring to them as unexplained aerial phenomena (UAP) during World War II.

But until the first footage of the incredibly rare phenomenon was captured on film in 1989, meteorologists doubted they even existed, and even today, no one can adequately explain how or why they form.

Now, thanks to Danish astronaut Andreas Mogensen, who spent 10 days on the International Space Station back in September 2015, we have the best images yet of these eerie light shows, and a new study has described them in unprecedented detail this week: 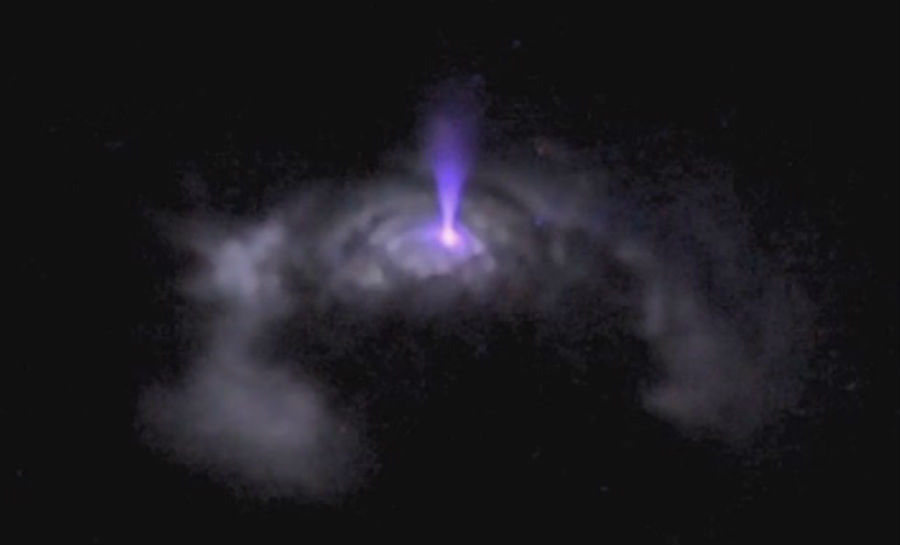 "It is not every day that you get to capture a new weather phenomenon on film, so I am very pleased with the result - but even more so that researchers will be able to investigate these intriguing thunderstorms in more detail soon," says Mogensen.

Filmed above a series of violent thunderstorms over India, Mexico, Thailand, and Costa Rica, Mogensen's footage features rare columns of electrical discharge called blue jets that can fan up and out through space as far as 12 kilometres (7.4 miles): 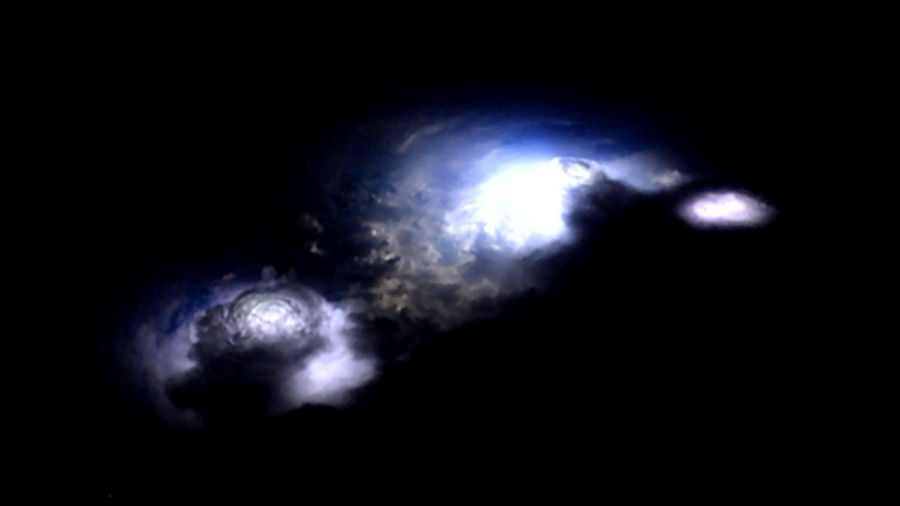 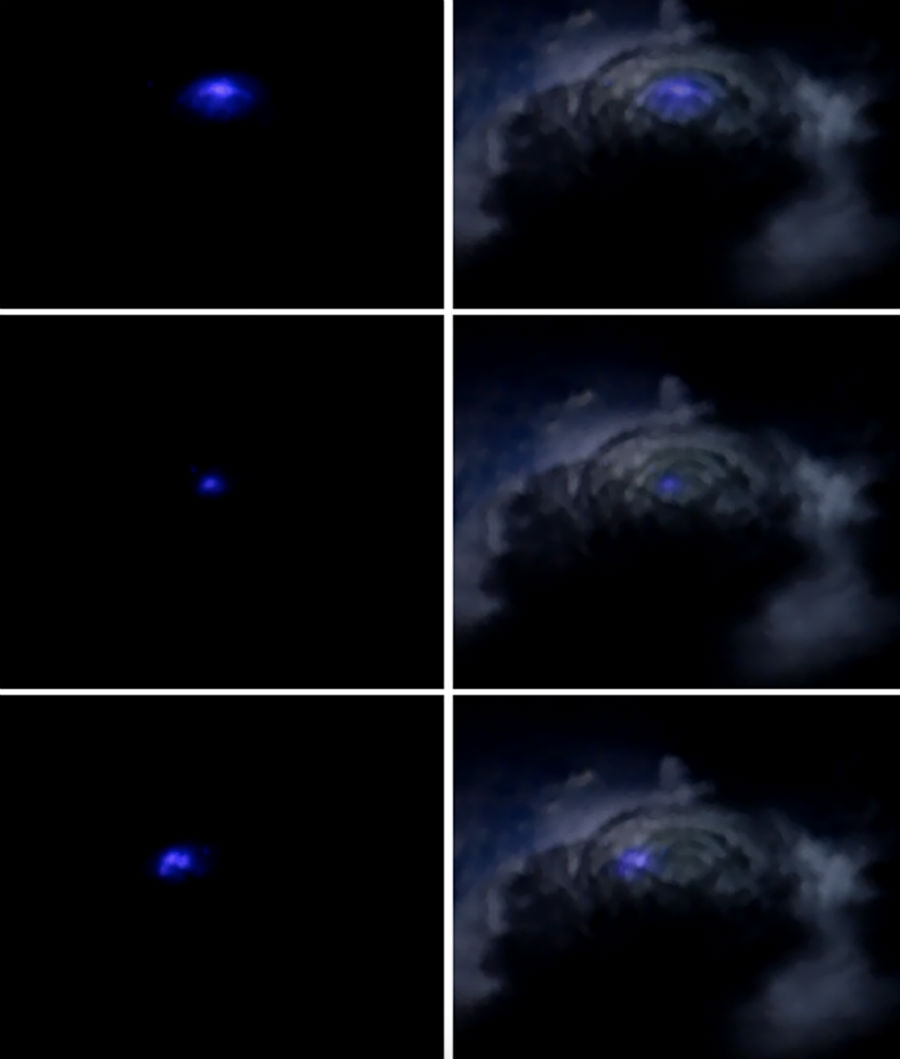 According to the Geophysical Institute at the University of Alaska Fairbanks, blue jets move at speeds of more than 360,000 km/h (220,000 mph), and can sometimes flash more than 100 times per minute.

The majority of blue discharges Mogensen captured on film were pinpointed to between 18 km and 40 km (11 and 25 miles) above Earth's surface in the upper stratosphere - the second major layer of Earth's atmosphere.

Their longest duration was between 83 and 125 milliseconds, so without a high-speed camera in hand, you could easily see how these eerie flashes could pass as fleeting hallucinations.

"The observations show a multitude of blue, kilometre-scale, discharges at the cloud top layer at ~18 km altitude and a pulsating blue discharge propagating into the stratosphere reaching ~40 km altitude," Mogensen reports in a new paper.

"The small blue surface discharges appear to 'dance' on the top of the cloud turret at a surprisingly high rate of about 120 per minute."

Since recording the footage, Mogensen has been analysing the data, and has now released the most detailed reports of blue jets in the current scientific literature. But researchers are still trying to figure out exactly what they are.

The best explanation we have right now is that when negatively-charged lightning hits the ground, it makes the clouds above more positively charged, and that creates just the right conditions for a blue jet to arise.

"That electrical imbalance is released in skyward high-energising bursts that ionise nitrogen to produce a blue glow: a blue jet," Mika McKinnon explained over at Gizmodo when the footage was released last year.

"The electrical ejections [move] fast, reaching speeds of 100 kilometres per second and dissipating within a quarter of a second. In the realtime video captured by Mogensen, it's far too easy to blink and miss the jet spearing out the top of the storm."

Blue jets belong to a class of natural phenomena known as transient luminous events (TLEs), which include the equally bright and eerie red sprites: 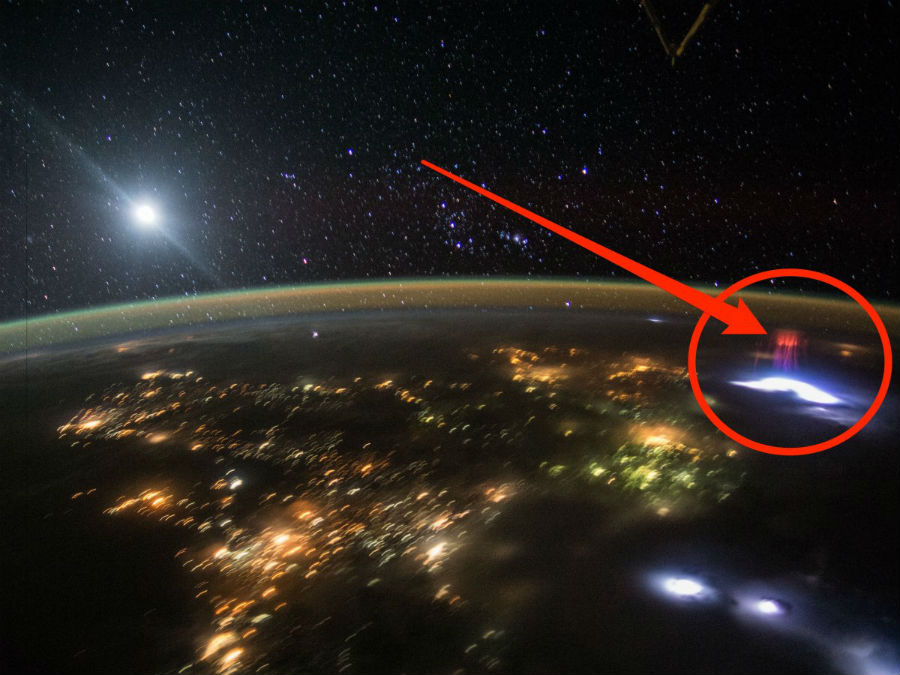 It's not clear what gives them their distinctive hue, but they form in much the same way as blue jets.

"They're sparks created in the upper atmosphere, well above a storm cloud, that follows lightning below the cloud," Steve Cummer, an electrical engineer who studies lightning and sprites at Duke University, told National Geographic back in 2012.

"The [lightning] charge creates an electric field and, when it's big enough, it drives a spark that propagates upward."

With Mogensen's observations now published, hopefully researchers will be better equipped to explain the phenomena, and figure out how to predict where in the darkness they'll form.