As the world gets hotter with climate change, one of the ongoing challenges humans will face is simply surviving worsening heat, with projected temperature increases expected to bring increasingly deadly heatwaves, even rendering some parts of the world uninhabitable.

Against such harsh heat, a new material developed by scientists in China could have the potential to help keep human bodies much cooler, thanks to a fabric that reflects light and heat away to a remarkable degree.

This nascent field of technology is called personal thermal management (PTM), and in a new study, researchers say their 'metafabric' could one day help wearers to beat excessive heat stress.

"The metafabric exhibits efficient radiative cooling performance and provides necessary breathability and wearing comfort for PTM," a team led by first author Shaoning Zeng from Huazhong University of Science and Technology explains in a new paper. 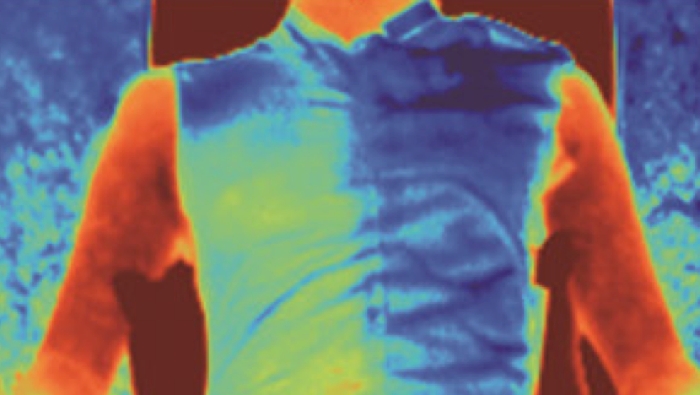 In this case, the metafabric uses titanium oxide-polylactic acid composite nanoparticles laminated with a thin layer of polytetrafluoroethylene (PTFE), and is designed to strongly reflect light, encompassing both visible light (VIS) and wavelengths in the mid-infrared (MIR) and ultraviolet (UV) ranges.

In theory, by reflecting much of the light across those wavelengths, the material should also reflect heat away before it has a chance to be absorbed.

"Such a wide distribution of nanoparticles, when combined with PTFE nanobeads, provides broad-spectrum scattering and reflectivity across the UV-VIS-NIR [near-infrared] band," the researchers write in their study.

To test the metafabric's cooling potential under sunlight, the researchers trialed the material in clear sky conditions in Guangzhou, China, measuring the temperature of the fabric in comparison to other common materials lying on a panel.

In another test closer to real-world conditions, a volunteer reclined under direct sunlight for an hour while wearing a special vest, made from the metafabric on one half, and a commercial cotton fabric on the other side.

An external thermal camera measured a 3.4 °C temperature difference between the two sides of the vest, but thermal sensors underneath the fabrics showed the difference underneath the vest was more pronounced – with the metafabric half being approximately 4.8 °C cooler than the cotton-covered side.

While the metafabric certainly shows considerable promise for cooling both people and things, it remains to be seen how effective the reflectance might be on moving individuals wearing the fabric as their clothing, as the results reported here only involved stationary subjects and objects.

It's also not understood yet how the material would cope with dyes and colors, which may affect its ability to reflect light, but future research and experimentation can hopefully address these unknowns.

On the plus side, the researchers say the material is compatible with commercial sewing techniques, and exhibits mechanical properties comparable to those of commercial fabrics, including durability and water resistance.

The team estimates the metafabric is inexpensive to produce, perhaps only adding about 10 percent to the costs of typical clothing manufacturing, the researchers told Science News.

If manufacturing partners come on board, the researchers are hopeful products made with the metafabric could be available in as soon as a year's time.

"These results show the great potential for commercial applications in various complex scenarios, such as smart textiles, sunshade products, logistics transportation," the authors write in their paper.

"Through embroidery, cutting and sewing, the metafabric can be integrated into various products for different scenarios, such as clothing, tents, car covers, curtains, and awnings."