Scientists Are About to 'Unravel' Ancient Papyrus Scrolls Charred by Vesuvius

It's hard to imagine how a thin papyrus scroll could survive a volcanic eruption. Even harder is imagining how such an artefact can be read some 2,000 years later without unrolling it at all.

An international team of researchers now claims we are closer than ever before to 'virtually' unravelling and reading the only intact library discovered from the classical world.

Numbering at more than 1,800 texts, the Herculaneum scrolls are some of the most famous human artefacts ever discovered. Yet actually reading their content has proved quite the challenge.

When Mount Vesuvius famously erupted in 79 AD, this unparalleled library was immediately carbonised in an avalanche of hot gas and ash, which turned its scrolls into nothing more than charred lumps of coal.

For more than two hundred years, scholars have carefully attempted to read what remains. But since the carbonised papyrus is as fragile as a butterfly's wings, even the smallest actions can cause irreversible damage, destroying the paper or fading the ink beyond comprehension.

Following several failed attempts to unroll the scrolls over the years, a new technique might finally allow us to read these texts without risk of destruction. The idea combines a high-resolution scanner and a machine learning algorithm to makes visible the carbon-based ink on carbonised paper: something that even X-rays can't show us.

After decades of effort, renowned ancient artefacts decoder Brent Seales thinks this double-pronged approach is his team's best chance yet. Decoding the Herculaneum scrolls has been a long-term goal for Seales, and he's now preparing to scan two intact scrolls, plus four smaller fragments from L'Institut de France using a particle accelerator in the UK. 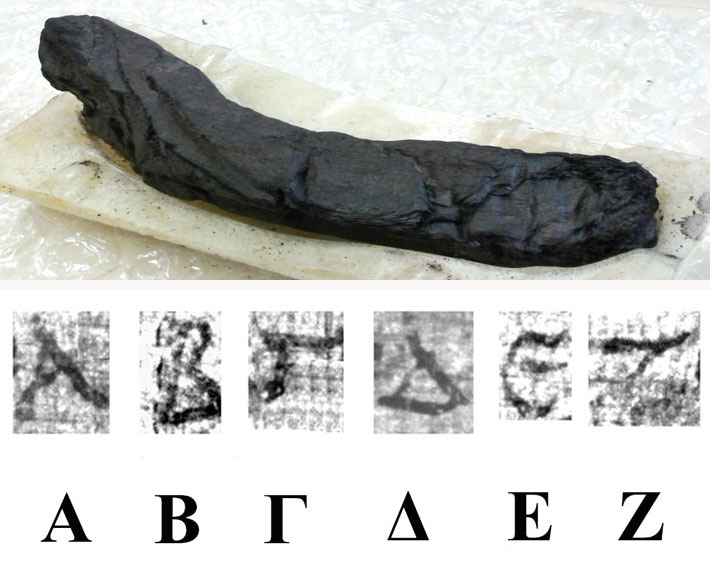 Known as the Diamond Light Source, this state of the art synchrotron shoots beams of light 100 billion times brighter than the Sun, allowing the team to rotate and view all 360 degrees of the scroll. It will be the first time an intact scroll has been scanned in such great detail at Diamond Light Source.

"We do not expect to immediately see the text from the upcoming scans, but they will provide the crucial building blocks for enabling that visualisation," says Seales.

"First, we will immediately see the internal structure of the scrolls in more definition than has ever been possible, and we need that level of detail to ferret out the highly compressed layers on which the text sits."

Armed with this high-resolution data, the team can then use a machine-learning tool to capture subtle contrasts in the scans. Compiling photographs of already opened scrolls, the software has been taught to identify carbon ink on ancient papyrus, identifying exactly where the marks should reside, pixel by pixel.

Seales and his team are thus hoping this digital method can help them 'peel' back the layers of the Herculaneum scrolls and expose their writings in a non-invasive way.

Even better, the technique has already proved successful on other, metallic-based inks, which are more easily deciphered. In 2015, Seales and his team used this ingenious idea to read an ancient text for the first time without physically opening it at all.

If the same can be done for carbon-based inks, an entire library of lost information might suddenly be opened up to the modern world.

"It's ironic, and somewhat poetic, that the scrolls sacrificed during the past era of disastrous physical methods will serve as the key to retrieving the text from those [that] survive but are unreadable," says Seales.

"[B]y digitally restoring and reading these texts, which are arguably the most challenging and prestigious to decipher, we will forge a pathway for revealing any type of ink on any type of substrate in any type of damaged cultural artefact."