When gold hunters in Russia collected the yellowish stone in 2016, they thought it might contain a precious metal. It didn't - but what it did contain was far more rare and valuable.

The rock had come from space, and it contained a new, never-before-seen mineral.

It has yet to be officially documented, but scientists have named it uakitite, after the Uakit region in Siberia where the meteorite fell.

Geologists from Ural Federal University, Novosibirsk State University and the Geological Institute of the Russian Academy of Science unveiled their discovery at the Annual Meeting of the Meteoritical Society in Moscow.

The new mineral's inclusions in the Uakit meteorite are microscopic. Mostly, the meteorite is iron. It's 98 percent kamacite, an iron-nickel alloy with at least 90 percent iron. On Earth, this is only found in meteorites.

The other two percent is made up of over a dozen minerals, most of which are also only known to form in space. And its composition is such that it must have formed under extreme hot circumstances - over 1,273 Kelvin (1,000 Celsius, or 1,832 Fahrenheit). 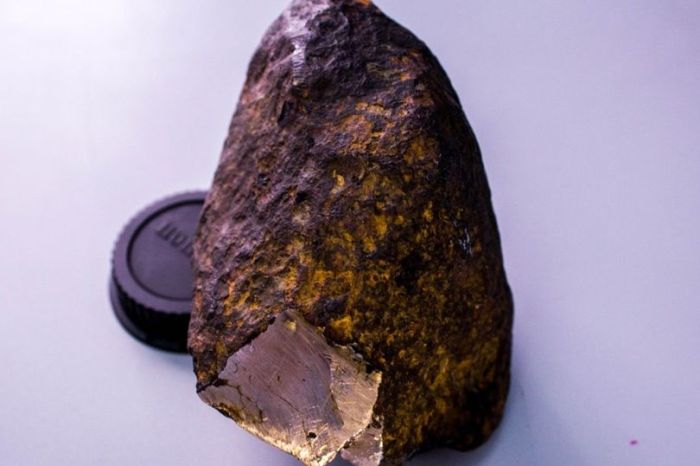 And then there's the uakitite. Its inclusions were just 5 micrometres in size. For reference, the average human hair is 99 micrometres in diameter, and a healthy red blood cell is between 6 and 8 micrometres.

These little bits of mineral are tiny. A little bit too tiny for direct analysis.

"Unfortunately," the researchers wrote in their summary, "we failed to obtain all physical and optical properties of uakitite because of the very small sizes of the grains."

But that doesn't mean they got nothing! The researchers were able to determine that uakitite has some structural similarities in common with two other space-forged minerals, carlsbergite and osbornite, both of which are nitrides, containing nitrogen.

They were also able to employ a technique called electron backscatter diffraction to obtain structural data for three of the uakitite crystals. This was then fitted to the structural model of a synthetic compound called vanadium nitride.

This allowed them to infer some of the new mineral's physical properties. If it is like vanadium nitride, it is a light grey colour, with a pink tint in reflected light, and it has a hardness of 9-10 on the Mohs scale.

This puts it at the same level of hardness as the other nitrides, and not quite as hard as diamond, which at a 10 on the scale remains the hardest mineral known.

In order to learn more about uakitite, we're probably going to need either more advanced technology, or another meteorite containing a lot more of it.

But for now, the researchers can enjoy the discovery at a fundamental level - it's not every day an entirely new mineral crashes to Earth!

You can read the team's paper here.