Antarctica is supposed to be an extremely cold place. The annual mean temperature of the snow-laden continent's central area is -57 degrees Celsius (−70.6°F); even the coast averages around -10°C (14°F).

But on February 6, the weather station at Esperanza Base on the Antarctic Peninsula - the northernmost tip of the content - logged the hottest temperature ever recorded on the mainland, at 18.3°C (64.9°F).

This latest heatwave lasted for about a week, and images of Eagle Island, taken by the Operational Land Imager on Landsat 8, have now captured a pretty depressing picture of its impact.

The tiny Eagle Island is located just off the coast of Graham Land in the Antarctic Peninsula. The record-high temperatures have resulted in a large amount of Eagle Island's ice cap melting into the sea, while areas towards the middle of the island saw melt ponds form astonishingly quickly.

"You see these kinds of melt events in Alaska and Greenland, but not usually in Antarctica."

Pelto also notes that the source of this melt event - persistent high temperatures significantly above freezing - is not typical of Antarctic weather patterns. Nevertheless, these have become more common recently.

In total, snow pack on Eagle Island had over 10 centimetres (4 inches) of melt in the span of just a few days - between February 6 and February 11. 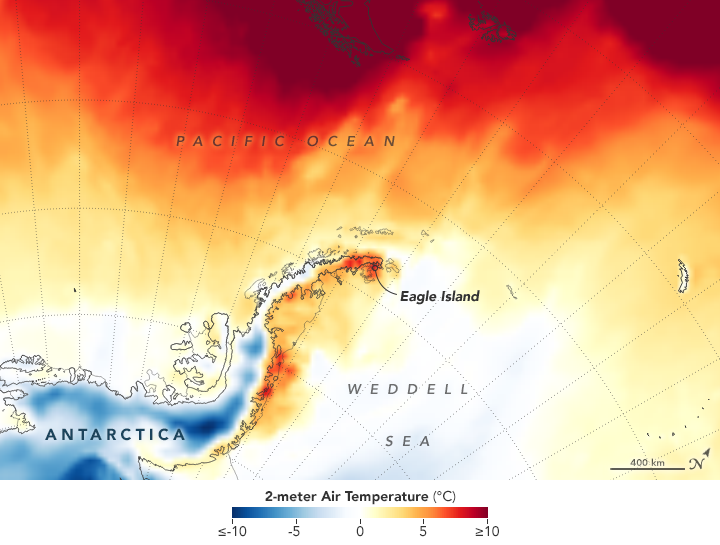 This isn't even the first heatwave this season, but represents the third major melt event of the 2019-2020 Southern Hemisphere summer, with both November and January also suffering from exceptionally warm weather.

"If you think about this one event in February, it isn't that significant," said Pelto.

"It's more significant that these events are coming more frequently."