A Huge Gathering of Octopuses Has Been Found at Record Depths, And They Don't Look Well

Off the coast of Costa Rica, about 3 kilometres (roughly 2 miles) beneath the ocean's surface, there is a literal mother-lode of octopuses, where octopuses have no business being.

Not only does this concentration of cephalopods represent an entirely new species – which is exciting news in itself – but their numbers and unusual location have researchers questioning what we thought we knew about these strange deep sea creatures.

A team of geochemists stumbled across the animals while exploring a 2 kilometre (just over a mile long) ridge of cooled lava named Dorado Outcrop with a deep sea submersible probe.

Their intention was to collect samples of the heated fluids leaking from the sea floor, so the discovery of a new octopus species came as a surprise.

"When I first saw the photos, I was like 'No, they shouldn't be there! Not that deep and not that many of them," says zoologist Janet Voight from the Field Museum in Chicago.

Together with two other researchers, Voight analysed more than 230 hours of footage of the octopus gathering to determine what they were doing so far down.

Each specimen was estimated to be roughly the size of a dinner plate, pink, with huge eyes befitting a deep-sea dweller, and most likely belonging to the genus Muusoctopus. 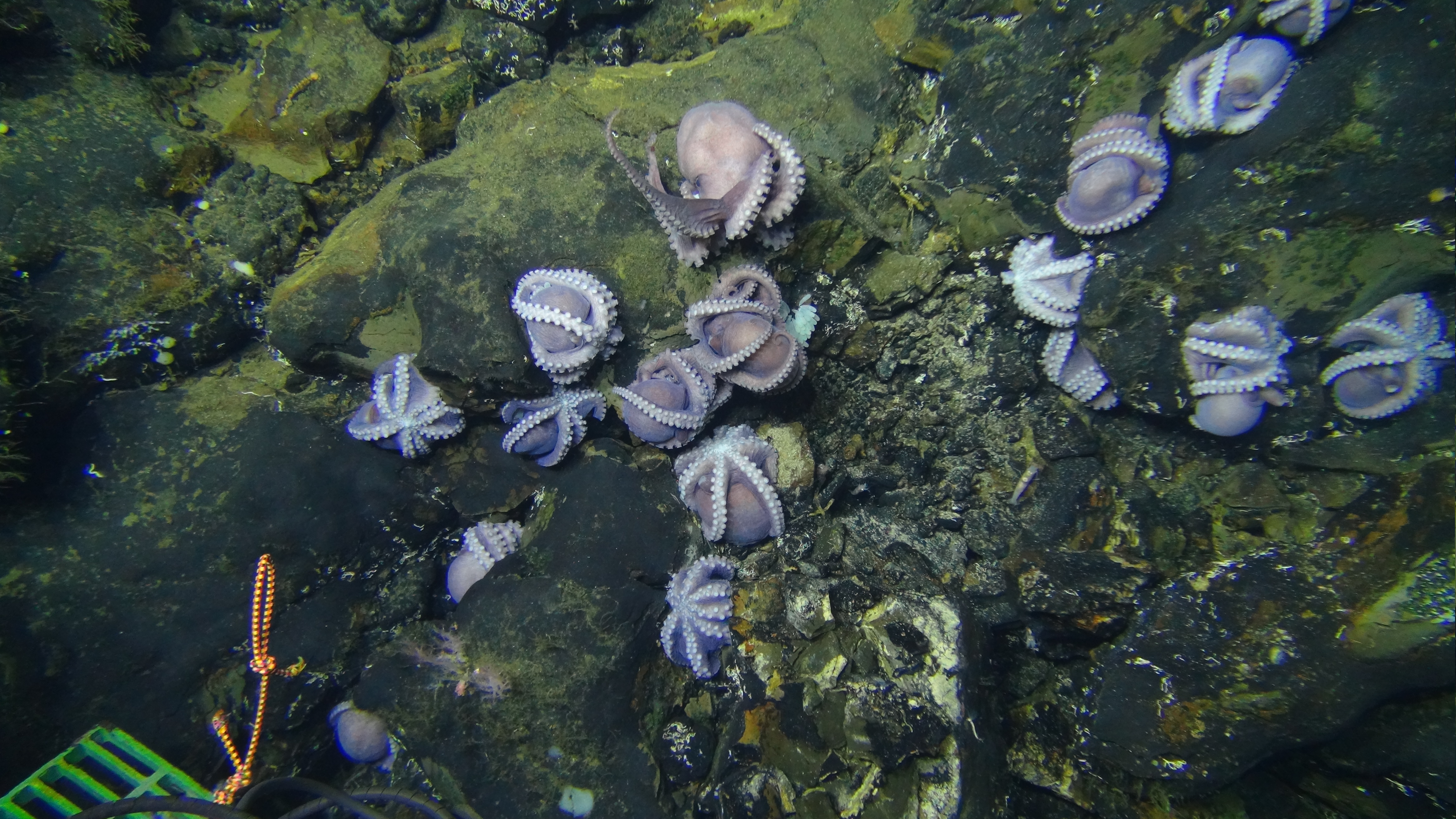 The good news is we can probably rule out a convention planning a hostile land invasion. Far from forming an army, they were all found to be females, with about a dozen huddled around broods of eggs.

But octopuses from this genus are usually loners, so finding them in clusters of up to a hundred individuals posed something of a mystery.

Weirder still, their proximity to vents of heated liquid seeping from the ocean floor was suicidal – similar octopus species prefer a constant cool temperature as warmth threatens to crank their metabolism and force them to gobble up oxygen.

Their eggs were in a sorry state as well, with no signs of embryos moving within any of the 186 eggs they observed.

The story they pieced together suggested these visible groups were just the unfortunate tip of a sad octopus iceberg.

"Octopus females only produce one clutch of eggs in their lives," says Voight.

"For this huge population to be sustained, there must be even more octopuses to replace the dying mothers and eggs that we can see."

Hidden out of sight, in far more hospitable conditions, lurked an even bigger population.

At least that's the hypothesis, with the researchers noting occasional glimpses of a sly tentacle or two reaching out of cracks in the basalt.

"Never would I have anticipated such a dense cluster of these animals at 3,000 meters depth, and we argue that the numbers of octopuses we see are simply the surplus population," says Voight.

The find is reminiscent of another recent gathering of the usually solitary animal.

Last year researchers reported on a concentration of octopuses off the Australian coast, also apparently brought together by a shared love of the local real estate.

Further expeditions would be needed to confirm the existence of this new Muusoctopus species in sizeable numbers, but the chaotic, rocky environment is perfect for an octopus metropolis.

It's often said we know less about the ocean floor than we do the surface of the Moon or even Mars.

Robotic submersibles and drones are slowly changing that with researchers plumbing the depths in ever greater detail, meaning we can expect to see more discoveries such as this in the near future.

This research was published in Deep Sea Research Part I: Oceanographic Research Papers.