Meet the newly announced S-512 Supersonic Jet - set to become the world’s fastest airliner, capable of hitting a supersonic cruising speed of Mach 1.6 (1,963 km or 1,220 mph) and a maximum speed of Mach 1.8 (2,205 km/h or 1,370 mph). At least, that's what Spike Aerospace, the US-based aerospace engineering and design firm behind the concept, is claiming, and they’re ready to spend the $80 million or so it costs to make it happen.

Faster and more exclusive than the SABRE engine that British aerospace firm Reaction Engines Limited says will take 300 passengers anywhere in the world in just 4 hours, the dual-engine S-512 Supersonic Jet is designed to ferry 18 passengers between London and New York City in just three hours - flying 724 km/h (450 mph) faster than any other civilian jet.

The concept was first announced in 2013, and since then, the team has been working on making the design as safe, fast, and cost-effective as possible. "The past 18 months have resulted in significant improvements in all three factors and in a few additional areas like sonic boom, range, and comfort," the team says at the Spike Aerospace website, adding that the new wing and tail designs will reduce wave drag and fuel burn, which in turn will increase the plane’s range during both low-speed flight and supersonic cruise. Right now, its range is listed as 10,334 km, and its maximum altitude is expected to reach 15,240 metres.

Rather ironically, the shortest trip you’ll ever take between two of the world’s greatest cities will also be the most comfortable, with Spike Aerospace promising no bad meals or cramped seats for anyone. The website lists panoramic views, captured by cameras surrounding the aircraft; soft leather seating; reduced cabin noise; higher oxygen levels; and high-speed wireless Internet access as some of the features the 18 passengers will enjoy. Also tables. On a plane. 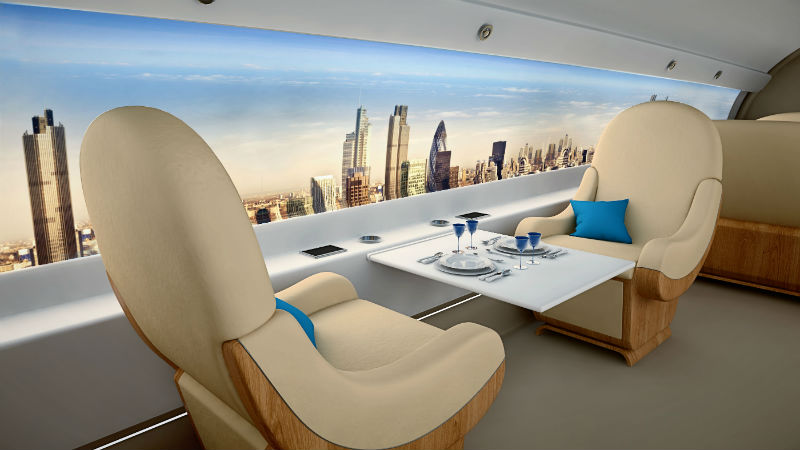 If all of that sounds way too out of your budget, hell yes, it will be. With a price tag of between US$60 and $80 million, and only 18 passengers flying in it at any given moment, tickets will probably only be available to the likes of Saudi princes and YouTube stars.

But don’t let that discourage you - if this project actually gets off the ground, it could mean great things for air travel for the rest of us in the future, as engineers figure out how to make supersonic air travel even more cost-efficient. All technology has to start somewhere, right?

"Flying supersonic is clearly the future of aviation," Spike CEO and President Vik Kachoria says. We hope so!