To this day, the Khmer Empire is remembered for its magnificent capital Angkor, but the legendary Southeast Asian empire moved its seat of power around quite a bit, sometimes with uncertain results.

The ancient city of Koh Ker had a very brief spell as the capital and centre between 928-944 CE, and now archaeologists think they have finally figured out the source of its failure.

It looks like the city didn't have a big enough reservoir spillway. A new study has used ground-penetrating radar and manual excavation to uncover some of the hidden structures of the Koh Ker settlement, discovering a chute some seven kilometres long (4.3 miles), designed to ferry water from the Stung Rongea river.

Based on the team's calculations, the chute – constructed from laterite – wouldn't have had the necessary capacity, leading to overflowing and flooding, and meaning the water didn't get where it was supposed to go.

That would've been bad news for King Jayavarman IV, in charge at the time. The researchers think it may have prompted a hasty return to Angkor, where the capital had been based previously, and where the waterways actually worked.

"At that time, embarking on projects of civil engineering such as temple building, urban renewal, and the development of water infrastructure was central to establishing the legitimacy of Khmer kings," says archaeological scientist Ian Moffat, from Flinders University in Australia.

You have to give King Jayavarman IV and his engineers credit for trying: the water management system at Koh Ker was the biggest in the history of the Khmer Empire, even if it didn't work as intended. Tens of thousands of people would have been working on the infrastructure, the study suggests.

Based on the discovered topography of the structure, and models of the water flow velocity, the researchers think the spillway may have failed during the first rainy season in the region.

And water management would have been hugely important for agriculture and drinking water in the Khmer Empire, because of those monsoon seasons and the unpredictability of the water supply across the course of the year.

"It's not difficult to envisage that the failure of the embankment at Koh Ker – the largest and most ambitious infrastructure project of the era – may have had a significant impact on the prestige of the sovereign capital, and contributed to the decision to re‐establish Angkor as the capital of the Khmer Empire," says Moffat. 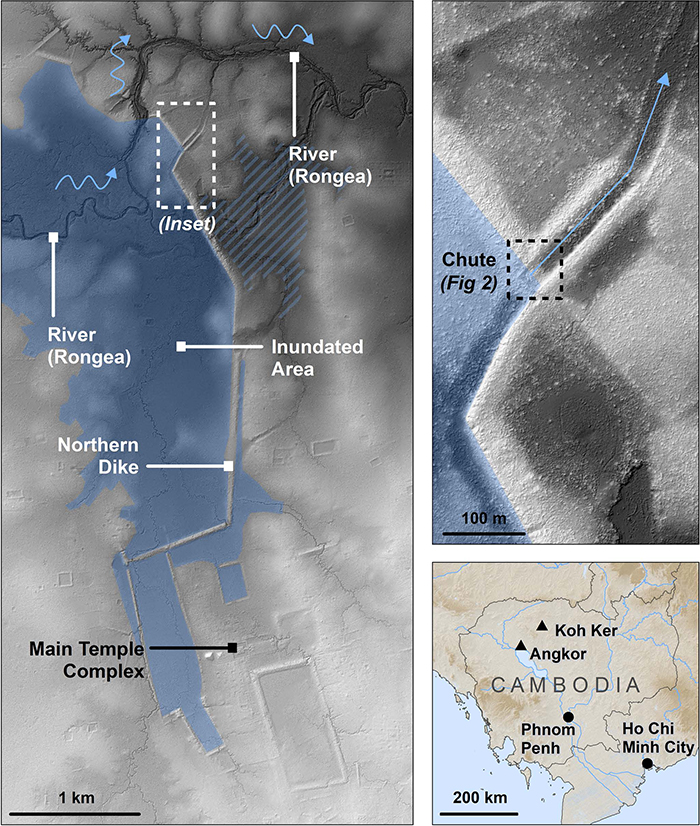 We still don't know all that much about Koh Ker, despite its brief spell as the capital of the Khmer people. It lies among sloping hills and stone outcrops, some 90 kilometres (56 miles) northeast of Angkor, in northern Cambodia.

But work such as this new study has been revealing more secrets of the Khmer Empire. Earlier this month, a separate project uncovered the lost Khmer city of Mahendraparvata, after decades of searching.

Much more has been discovered up to this point about the ancient city of Angkor, home to as many as half a million people at one point, and famous for its sophisticated water management – making it a better option than Koh Ker.

Eventually though, even Angkor couldn't keep the water flowing, scientists have hypothesised – there's evidence that climate change (in the form of cycles of flooding and drought) contributed to the city's demise, and the end of the Khmer Empire as a whole.

This new research shows just how impressive the reservoirs and waterways of Angkor truly were – the Khmer tried to replicate something similar at Koh Ker and didn't get it right. In fact, thanks in part to the different terrain, they got it quite dramatically wrong.

"Our study shows that this ambitious engineering feat was always doomed to rapid failure," says Moffat.

The research has been published in Geoarchaeology.