Venus, as imaged by the Magellan mission. (NASA/JPL)

Despite the similarities our world has with Venus, there is still much don't know about Earth's "sister planet" and how it came to be.

Thanks to its super-dense and hazy atmosphere, there are still unresolved questions about the planet's geological history. For example, despite the fact that Venus' surface is dominated by volcanic features, scientists have remained uncertain whether or not the planet is still volcanically active today.

While the planet is known to have been volcanically active as recent as 2.5 million years ago, no concrete evidence has been found that there are still volcanic eruptions on Venus' surface.

However, new research led by the USRA's Lunar and Planetary Institute (LPI) has shown that Venus may still have active volcanoes, making it the only other planet in the Solar System (other than Earth) that is still volcanically active today. 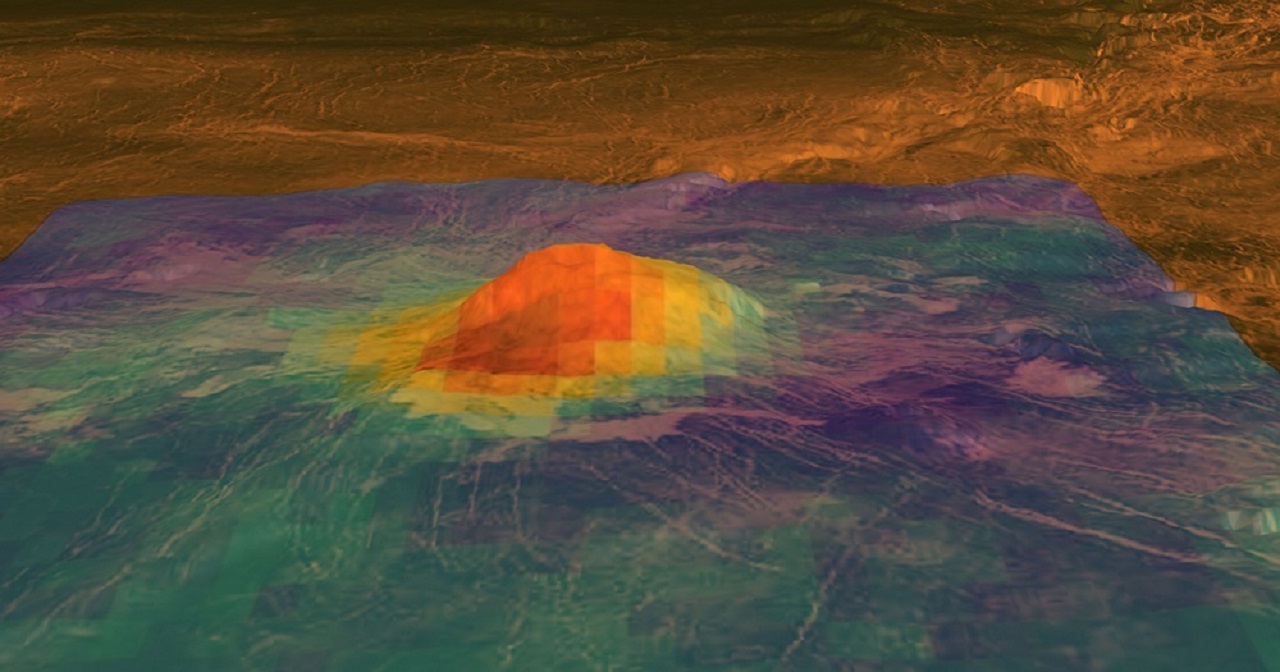 Figure above shows the volcanic peak Idunn Mons in the Imdr Regio area of Venus. The coloured overlay shows the heat patterns derived from surface brightness data collected by the Visible and Infrared Thermal Imaging Spectrometer, aboard the ESA's Venus Express spacecraft.

This research, which appeared recently in the journal Science Advances, was led by Justin Filiberto – a staff scientist with the LPI.

He was joined by fellow-LPI researcher Allan H. Treiman, Martha Gilmore of Wesleyan University's Department of Earth and Environmental Sciences, and David Trang of the Hawai'i Institute of Geophysics and Planetology.

The discovery that Venus once experienced a great deal of volcanic activity was made during the 1990s thanks to NASA's Magellan spacecraft. The radar imaging it provided of Venus' surface revealed a world dominated by volcanoes and lava flows.

During the 2000s, the ESA followed up on this with their Venus Express orbiter, which shed new light on volcanic activity by measuring infrared light coming from the planet's surface at night.

This data allowed scientists to examine the lava flows on Venus' surface more closely and differentiate between the ones that were fresh and those that were altered.

Unfortunately, the ages of lava eruptions and volcanoes on Venus were not known until recently since the alteration rate of fresh lava was not well constrained.

For the sake of their study, Filiberto and his colleagues simulated Venus' atmosphere in their laboratory in order to investigate how Venus' lava flows would change over time.

These simulations showed that olivine (which is abundant in basalt rock) reacts rapidly with an atmosphere like Venus' and would become coated with magnetite and hematite (two iron oxide minerals) within days.

They also found that the near-infrared signature emitted by these minerals (which are consistent with the data obtained by the Venus Express mission) would disappear within days.

From this, the team concluded that the lava flows observed on Venus were very young, which in turn would indicate that Venus still has active volcanoes on its surface. These results certainly bolster the case for Venus being volcanically active, but could also have implications for our understanding of the interior dynamics of terrestrial planets (like Earth and Mars) in general. As Filiberto explained:

"If Venus is indeed active today, it would make a great place to visit to better understand the interiors of planets. For example, we could study how planets cool and why the Earth and Venus have active volcanism, but Mars does not. Future missions should be able to see these flows and changes in the surface and provide concrete evidence of its activity."

In the near future, a number of missions will be bound for Venus to learn more about its atmosphere and surface conditions. These include India's Shukrayaan-1 orbiter and Russia's Venera-D spacecraft, which are currently in development and scheduled to launch by 2023 and 2026, respectively.

These and other missions (which are still in the conceptual phase) will attempt to resolve the mysteries of Earth's "sister planet" once and for all.

And in the process, they might be able to reveal a thing or two about our own!