For over 20 years, physicists have puzzled over why space appears to be flying apart at the seams.

New research is adding some deeper insight into the mysterious repulsive force known as dark energy, providing evidence that whatever it might be, its ghostly influence hasn't been constant over time.

In 2016, an international team of researchers accurately measured fluctuations in the density of visible matter through the Universe over long periods of its history.

These shifts – called baryon acoustic oscillations (BAO) – provide something of a yardstick for cosmologists studying relative distances over time.

Just as astronomers have used light from distant exploding stars to conclude the Universe is spreading out, cosmologists (big picture astronomers) have used BAO.

Whichever of these two tools we use, it looks as if the Universe has been gaining real estate over the 13.82 billion years of its existence, causing clumps of material in it to spread out.

Weirder yet, that growth has been speeding up for quite some time.

The unit used to describe this expansion is called the Hubble Constant, and is thought to be the result of the tension between matter pulling itself together and the swelling of space in between.

Why is space growing? Nobody is really all that certain, and that's a problem.

To help come up with an explanation astrophysicists look at the hum of empty space as if it has qualities, and isn't just an empty stage for fields and particles.

The odds-on favourite description at the moment is called the Lambda Cold Dark Matter (ΛCDM) model, which combines what's referred to as the Friedmann-Lemaitre-Robertson-Walker (FLRW) model of empty space with a distribution of visible and invisible matter within it.

In this model, dark energy is the constant push of emptiness between masses, possibly caused by the hiss of particles popping in and out of virtual existence.

But the ΛCDM model is built on a number of assumptions, leaving open the question; does dark energy need to be among the fundamental qualities of space, static over time?

Or could it be influenced by its surroundings, shifting as the Universe changes?

"Since its discovery at the end of last century, dark energy has been a riddle wrapped in an enigma," says researcher Bob Nichol from the Institute of Cosmology and Gravitation (ICG) at the University of Portsmouth.

"We are all desperate to gain some greater insight into its characteristics and origin."

Armed with more accurate measures of these tides of matter pulsing like a cosmic heartbeat, the researchers applied their BAO data to a dark energy model developed by Gong-Bo Zhao, from the University of Portsmouth and the National Astronomical Observatories of China (NAOC).

The study's results point to a more dynamic description of this mysterious force.

This conclusion is based in part on a conflict between data produced by the team's own BAO survey and interpretations based on the cosmic microwave background (CMB) – the echo of light bouncing through the Universe since moments after the Big Bang.

This diagram on the BAO (SDSS-IV) survey gives you some idea of how it relates to the CMB. 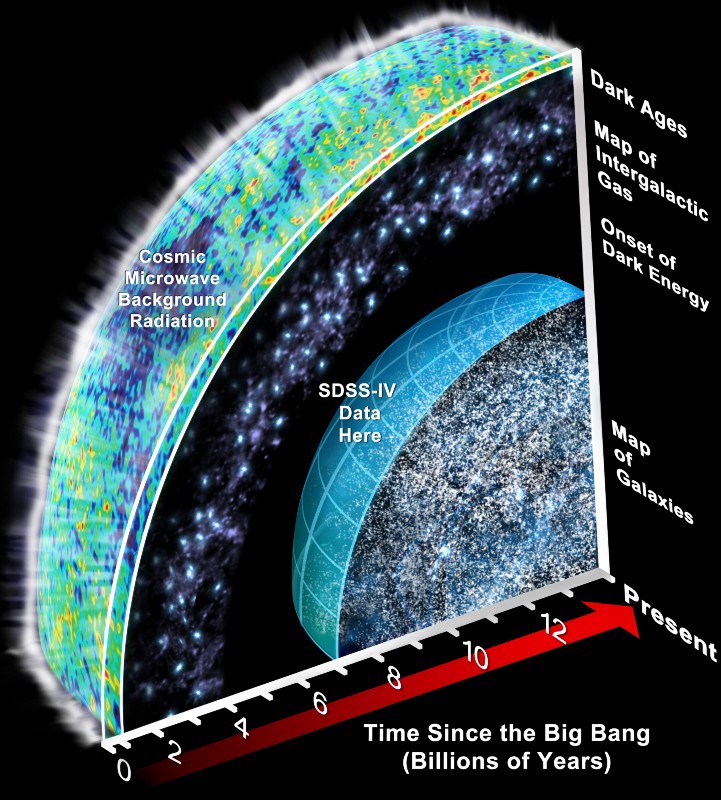 One way the researchers found they could resolve this difference is to treat dark energy as if it is dynamic changing with time.

If true, it would mean dark energy isn't a force produced by the bubbling of a vacuum.

The significance of their results isn't enough to overturn the evidence favouring the static dark energy feature of the ΛCDM model.

But that could all change with data collected from the Dark Energy Spectroscopic Instrument when it starts its survey next year.

"We are excited to see that current observations are able to probe the dynamics of dark energy at this level, and we hope that future observations will confirm what we see today," says Zhao.

Whatever the outcome, it'll be worth it – the fate of the Universe is at stake, after all.

This research was published in Nature Astronomy.