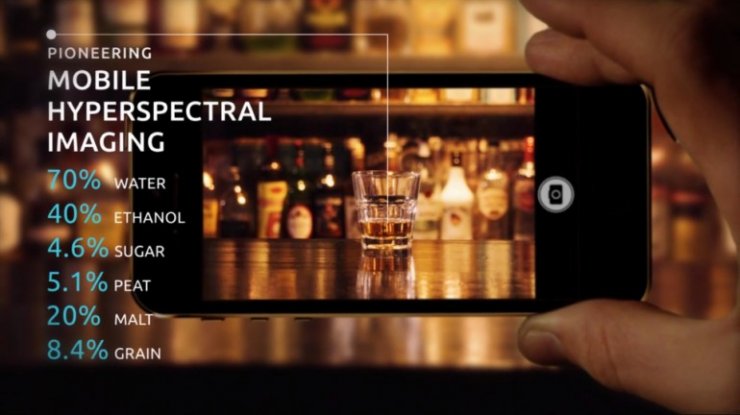 Imagine being able to take a photo or video of something, and get instant feedback on its chemical composition. You might want to know whether that $10 drink you ordered actually contains any alcohol, or whether the fruit you've bought from the supermarket is covered in pesticides.

Well, such a camera is on the horizon. Electrical engineers from Tel Aviv University in Israel have invented a device that could transform smartphone cameras into hyperspectral sensors, capable of detecting the chemical ingredients of an object or fluid simply by analysing a photo or video of it.

Satellites use this type of imaging technology to detect water and nutrients in soil, helping farmers manage their crops, or mining companies locate mineral and gas deposits underground.

This type of chemical sensing can already be done with large, sophisticated cameras, but the team says their device - which combines a newly patented optical component and image processing software - can conceivably be integrated into a smartphone. Their optical component is based on existing microelectromechanical or MEMS technology, which relates to very small machines, less than a millimetre in size, consisting of a microprocessor and other components, such as sensors.

They say their device, which can be mass produced, is compatible with all standard smartphone cameras.

It sounds good, in theory, but for the captured images to mean anything, they'll need to be paired up with a database containing information on the hyperspectral signatures of a range of different chemicals, points out Ben Coxworth from Gizmag points.

With a database of chemical signatures, the researchers can extract information from their images, and match this against existing data to determine what chemicals a given object might contain.

Mendlovic, along with doctoral student, Ariel Raz, have spun out a company called Unispectral Technologies, and are trying to partner with companies that can analyse its camera's images to build-up such a database.

The basic system was demonstrated at the Mobile World Congress in Barcelona last month, and the team is now developing a working prototype, which Gizmag says could be ready by June.

According to the Tel Aviv University press release, Unispectral has financial support from the Momentum Fund, which is backed by the large Indian engineering company Tata Group, as well as the flash memory firm SanDisk.