Dark matter might well be the biggest mystery in the Universe. We know there's something out there making things move faster than they should. But we don't know what it is, and we sure as heck don't know where it came from.

According to a new paper, the origins of dark matter may be more peculiar than we know. Perhaps, they were particles that appeared in a very brief period of time, just fractions of fractions of a second, before the Big Bang.

This doesn't just suggest a new connection between particle physics and astronomy; if this hypothesis holds, it could indicate a new way to search for the mysterious stuff.

"If dark matter consists of new particles that were born before the Big Bang, they affect the way galaxies are distributed in the sky in a unique way," said astronomer and physicist Tommi Tenkanen of Johns Hopkins University.

"This connection may be used to reveal their identity and make conclusions about the times before the Big Bang too."

It's all tangled up with the order of events at the beginning of the Universe, which in itself is a pretty murky period of time. 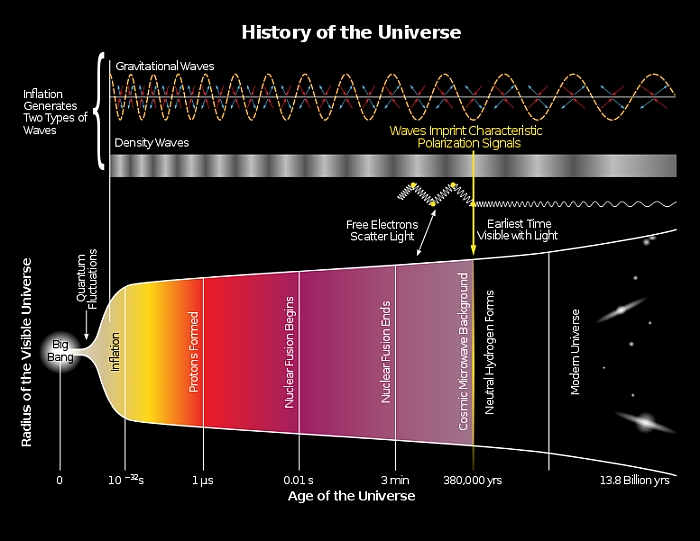 It seems more generally accepted that this occurred between around 10-36 and 10-32 seconds after the Big Bang. That model of inflation looks like the image above.

But some scientists think it happened just before the Big Bang, in which case the Big Bang is the name given to the conditions in the Universe right at the end of inflation.

At this stage we just have no way of knowing. As Harvard-Smithsonian theoretical physicist Avi Loeb said earlier this year, "the current situation for inflation is that it's such a flexible idea, it cannot be falsified experimentally." He was talking about whether or not cosmic inflation actually happened (also a matter of debate), but the statement works for the timing of the whoompf, too.

Dark matter - which, according to our calculations, makes up around 80 percent of the matter in the Universe - is sometimes considered to be a product of the Big Bang.

But "if dark matter were truly a remnant of the Big Bang, then in many cases researchers should have seen a direct signal of dark matter in different particle physics experiments already," Tenkanen states.

Instead, his mathematical modelling suggests that dark matter could have been a product of cosmic inflation. It's not the first time this idea has been proposed, but Tenkanen has provided the maths that support it.

And, if cosmic inflation occurred before the Big Bang, dark matter could have been around before the rest of the stuff in the primordial Universe Soup.

This suggests that scalar particles could lead us to dark matter. These are particles with a spin of zero, and the inflaton theory - whereby a scalar field drove cosmic inflation - suggests that they were produced in abundance during this eyeblink of time.

So far, we've only ever detected one scalar particle, the Higgs boson. But that wouldn't be able to tell us much about dark matter in and of itself anyway.

"While this type of dark matter is too elusive to be found in particle experiments, it can reveal its presence in astronomical observations," Tenkanen said.

"We will soon learn more about the origin of dark matter when the Euclid satellite is launched in 2022. It's going to be very exciting to see what it will reveal about dark matter and if its findings can be used to peak into the times before the Big Bang."

It's all highly theoretical stuff, but it's about as good a lead as any on the mysterious matter that's playing a key role in shaping our Universe. It'll be fascinating to see how the search for dark matter plays out in the coming decade.