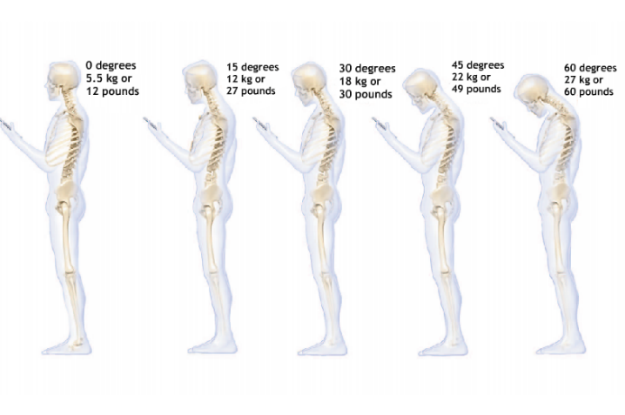 On average, we’re spending up to four hours a day looking down to read something or check our phones. This equates to 1,400 hours every year of extra stress on our cervical spines - the part in our necks just above our shoulders. A new study suggests that every time we do, we're putting about 27 kg (60 pounds) of force on our necks. As Olga Khazan points out at The Atlantic, that's equivalent to four bowling balls. Or an eight-year-old. And we still don’t know what the long-term effects of this will be.

The study was led by Kenneth Hansraj, chief spinal and orthopaedic surgeon at the New York Spine Surgery and Rehabilitation Medicine in the US, who used a 3D model of the human spine to measure the effects of constantly bending our heads down to check our phones. Because our heads are pretty heavy - weighing up to 5.5 kg, or 12 pounds - when we are frequently looking down for extended periods, we’re increasing the gravitational pull on them. And, as it turns out, this force is pretty huge.

But before you throw your phone out the window and dig your letter-writing kit out of the boxes in the attic, don’t panic. Sydney-based musculoskeletal physiotherapist Tamer Sabet told Rachel Clun at The Sydney Morning Herald that neck pain can be the result of an array of factors, such as age, sex, type of employment and various stresses, including - but not restricted to - phone use.

"From a purely physical perspective, the findings of what they're proposing make sense; however, pain is appreciated to be multidimensional,” she said. "There is an increasing body of information on genetic predisposition, personality traits or mood, and physical environment [as being associated with neck pain].”

Hansraj admits it's not reasonable to expect everyone to give up their phones to save their spines, but says just being aware of the problem, and making an effort to correct your posture as you're checking your phone will help in the long-run.