A recent report in the Hong Kong Medical Journal describes a case of a newborn baby girl who was found to be carrying two strange masses of tissue in her abdomen that scientists suggest could be partially developed foetuses.

How did those masses get in there? They're the result of a super-rare developmental abnormality called foetus in foetu - which literally means "foetus inside a foetus". Estimated to affect one in 500,000 live births, the phenomenon involves a large growth of tissue growing inside another one. This growth can look sort of like a poorly developed foetus, but will have no functional brain, heart, lungs, gastrointestinal or urinary tract, so no life.

No one's really sure what causes foetus in foetu, but researchers suspect that perhaps the tissue mass begins as a regular foetus, but is accidentally enveloped inside its twin. Another theory is that the mass is a highly developed teratoma, which is a type of tumour that consists of more than one type of cell, causing various tissue and organ components to grow inside it, such as hair, teeth, bone and, very rarely, eyes, torsos, or limbs.

In the case of this little girl, the two masses appeared after around 10 weeks of gestation, as Sydney Lupkin reports at ABC News:

"Each structure included a spine, intestines, bones with bone marrow, 'primitive' brain matter, a rib cage and an umbilical cord, according to the study. The study authors said the partially formed foetuses and the baby girl shared the same DNA, fitting a popular theory that the woman was initially pregnant with identical triplets, but researchers aren't sure this is what happened.

Judging by the body parts they found in the baby girl, the doctors determined that the absorbed twins could have been up to 10 weeks old before their growth stopped and they were absorbed. But the mechanism for this 'absorption' is not fully understood, the study authors wrote, so it's also possible the extra foetuses were absorbed earlier and grew with the baby girl in the womb."

They were both successfully removed from the space between the little girl's liver and left kidney without complication.

"I think we see these on occasion and they're bizarre," Jane Corteville, an OB/GYN at University Hospitals Case Medical Centre in Cleveland, Ohio, and an expert on the phenomenon, told ABC News. "And I think they do give us kind of some insight maybe - but not very much - into what happens during early development." 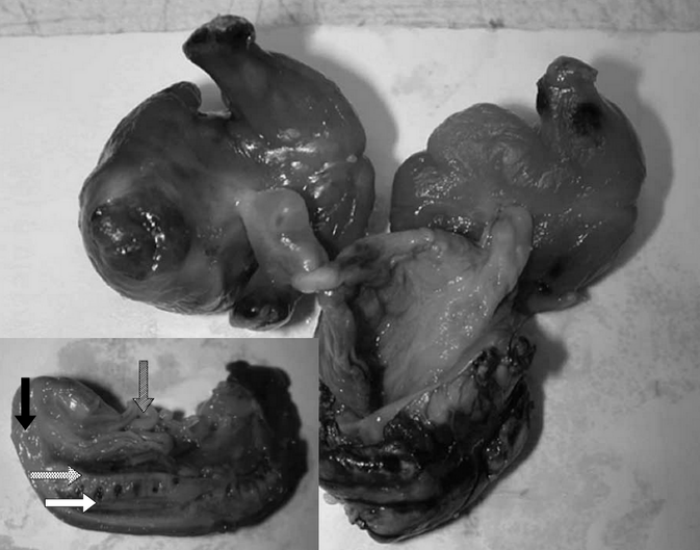