Paleontologists in subantarctic Chile have discovered the remains of a "very weird" ankylosaur that had a deadly armored tail like no other known dinosaur, the researchers said.

"The tail would have looked like a sword; it's so flat," study co-lead researcher Alexander Vargas, a vertebrate paleontologist in the Department of Biology at the University of Chile, told Live Science. It would have looked "a bit like an Aztec sword, or the Aztec club called the macuahuitl."

In addition to revealing its weaponized tail, the dinosaur's remains tell a previously unknown tale about ankylosaur evolution: The breaking apart of the supercontinent Pangaea during the Jurassic period (201.3 million to 145 million years ago) led to extreme differences between ankylosaurs on the northern supercontinent Laurasia and those on the southern supercontinent Gondwana, like this newfound species, named Stegouros elengassen.

The newfound species was described in a study published online Wednesday (December 1) in the journal Nature.

Paleontologists found S. elengassen in Cretaceous period rocks dating to between 71.7 million and 74.9 million years ago in February 2018. The well-preserved skeleton was about 80 percent complete, and "it's weird, because it's articulated [the bones are in order] from the waist down, and everything from the waist up was kind of scattered," Vargas said. 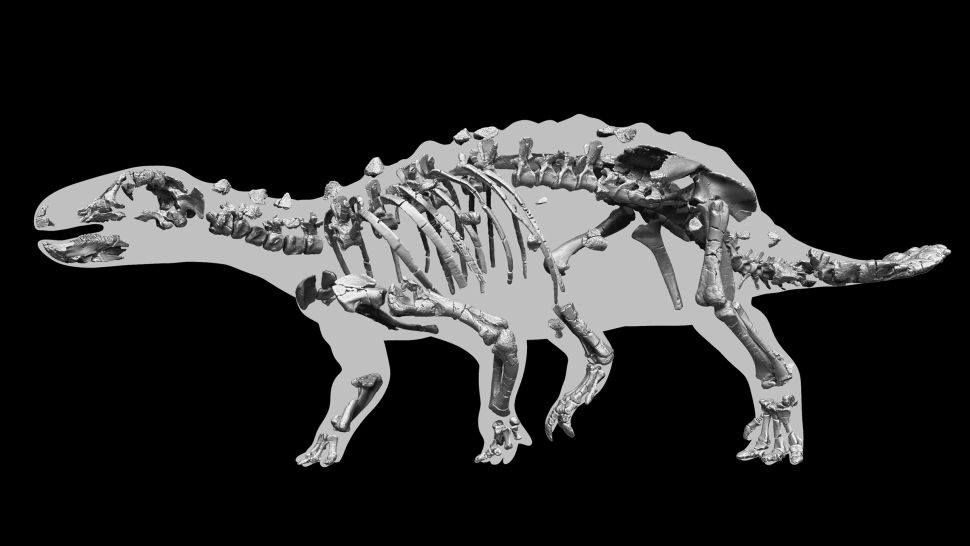 They found roughly 80% of the animal's skeleton. (Francisco Hueichaleo)

The beast died by a river, perhaps in quicksand, which would explain why its bottom half is so well preserved, although this is just speculation, he said.

The team had only five days left in the field season to excavate the dinosaur remains, and that short timeline led to a painstaking effort involving a sprained ankle, a broken rib and near-hypothermia among the crew, Vargas said.

But their hard work paid off: Now, the largely Chilean team has an exquisite specimen of a roughly 6.5-foot-long (2 meters) ankylosaur sporting a tail that looks like a fern frond.

The dinosaur's genus name, Stegouros, comes from the Greek words for "roof" (stego) and "tail" (uros) – a nod to its covered tail – and its species name, elengassen, refers to an armored beast in the mythology of the local Aónik'enk people.

S. elengassen is strikingly different from Laurasian ankylosaurs; it's lightly armored with a few rows of osteoderms, or bony plates, and has a "rather large head with a narrow, curved beak, which is not common for ankylosaurs," Vargas said. "It has slender limbs. … It doesn't have pointed claws; it has rounded, hoof-like claws on both hands and feet."

What's more, the ankylosaur's pelvis is wide and stegosaur-like. "If you had only the pelvis, you would think you had the first Stegosaurus of the Cretaceous," he said. (Stegosaurus lived earlier, during the Jurassic period.) 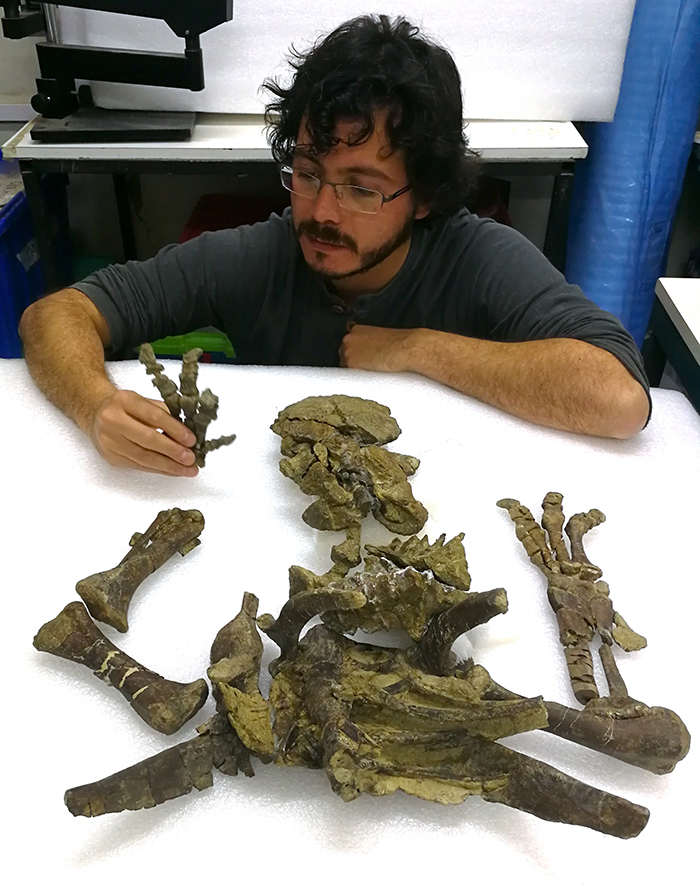 S. elengassen's most distinctive feature, its tail, is the shortest tail of any known armored dinosaur. It's made of seven paired large and flattened osteoderms. The first two pairs are near the body, and the next five pairs are fused together as a flat, powerful weapon, Vargas said. In contrast, other ankylosaurs have paired spikes or clubs on their tails.

But now, S. elengassen, "the first completely studied ankylosaur from the Southern Hemisphere", shows that it and two other known Southern Hemisphere ankylosaurs – Antarctopelta, from Antarctica, and Kunbarrasaurus, from Australia – are lacking many of the specialized traits that the ankylosaurs of the North had and that they already had in the mid-Jurassic," Vargas said. "So these must have split off before the mid-Jurassic, which speaks of very ancient roots."

It's exciting to find an armored dinosaur with a never-before-seen tail, Vargas said.

"We all know tail clubs, we all know the tail spine, but this is a new lineage … a Southern Hemisphere lineage that evolved a third kind of tail weapon," Vargas said.

According to Matt Lamanna, a vertebrate paleontologist at the Carnegie Museum of Natural History in Pittsburgh, who wasn't involved with the study, "It's just exceptional material and just a really unexpected dinosaur."

Photos: This plant-eating dinosaur had spikes, armor and camouflage

Photos: Spiky-headed dinosaur found in Utah, but it has Asian roots