Move Over, Neanderthals. This Could Actually Be Our Closest Human Relative

In 1933 a mysterious fossil skull was discovered near Harbin City in the Heilongjiang province of north-eastern China. Despite being nearly perfectly preserved – with square eye sockets, thick brow ridges and large teeth – nobody could work out exactly what it was.

The skull is much bigger than that of Homo sapiens and other human species – and its brain size is similar to that of our own species. Historical events left it without a secure place of origin or date, until today.

Now a team of Chinese, Australian and British researchers has finally solved the puzzle – the skull represents a previously unknown extinct human species. The research, published as three studies in the journal Innovation, suggests this is our closest relative in the human family tree.

Dubbed Homo longi, which can be translated as "dragon river", it is named after the province in which it was found. The identification of the skull, thought to have come from a 50-year-old male, was partly based on chemical analysis of sediments trapped inside it.

This confirmed it comes from the upper part of the Huangshan rock formation near Harbin City. The formation was reliably dated to the Middle Pleistocene – 125,000 to 800,000 years ago. Uranium series dating, which involves using the known rate of decay of radioactive uranium atoms in a sample to work out its age, showed that the fossil itself is at least 146,000 years old.

Homo longi can now takes its place among an ever increasing number of hominin species across Africa, Europe and Asia.

Determining the historical relationship between fossil species, however, remains one of the most difficult tasks in the study of human evolution.

In recent years, the analysis of ancient DNA has transformed our understanding of the relationship between early populations of modern humans. It has also highlighted how we are different - and similar – to our most immediate relatives, the Neanderthals.

Surviving DNA, however, is very rare for fossil hominins from the Middle Pleistocene, as it tends to degrade over time. Evolutionary relationships must therefore be determined using other evidence. This is usually data on the shape - morphology - of fossils, their age and geographical location.

The Harbin team generated a family tree ("phylogeny") of human lineages to work out how the species relates to modern humans. This tree is based on morphological data from 95 largely complete fossil specimens of different hominin species living during the Middle Pleistocene, including Homo erectus, Homo neanderthalensis, Homo heidelbergensis and Homo sapiens along with their known ages.

The tree also suggests that five previously unidentified fossils from northeastern China are from Homo longi. 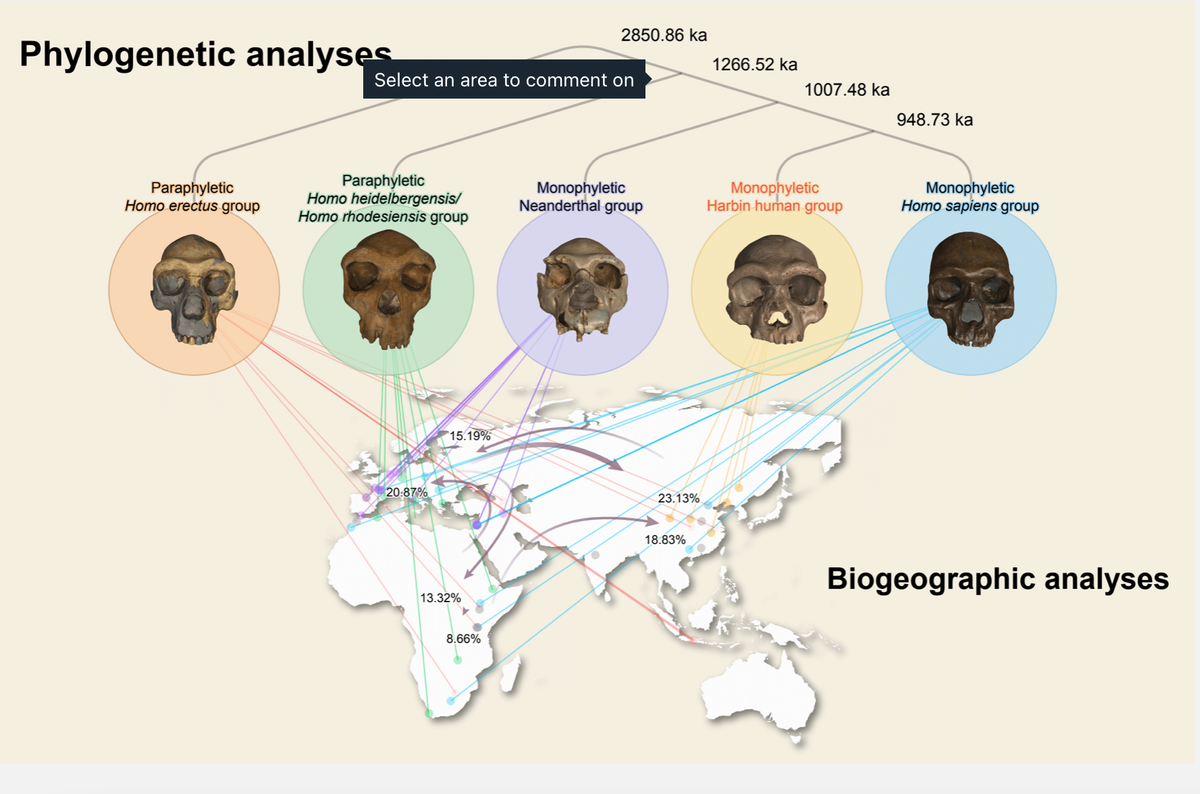 Until now, the Neanderthals were considered our closest relative (according to the study, we split from Homo heidelbergensis some 1.3 million years ago). Debates about the evolution of modern humans and what it is that makes us "human" therefore relied heavily on comparisons to Neanderthals.

But the new discovery pushes Neanderthals one step further away from ourselves and makes simple comparisons between two species much less important to understanding what ultimately makes us who we are.

There are, however, still significant points of concern about the dating of this phylogenetic model, as recognized by the authors. The predicted dates for the common ancestors between human lineages do not match the dates of actual discovered fossils, or those predicted by the analysis of DNA.

For example, this study proposes that there was Homo sapiens in Eurasia at about 400,000 years ago. But the oldest fossil for this species known outside Africa is little more than half this age.

At the same time, the split between Homo sapiens and Neanderthals predicted here at more than 1 million years old does not match the prediction of nuclear DNA analysis, which suggests it happened much later. However, it can be backed up by doing DNA analysis with genetic material taken from the cell's engine, called the mitochondria.

The older estimates presented by this study may result from the use of new techniques, called Bayesian tip dating, which aren't normally used in evolutionary studies. These can take into account both morphological and molecular data and make predictions about the possible sequence and date of the divergence of species. 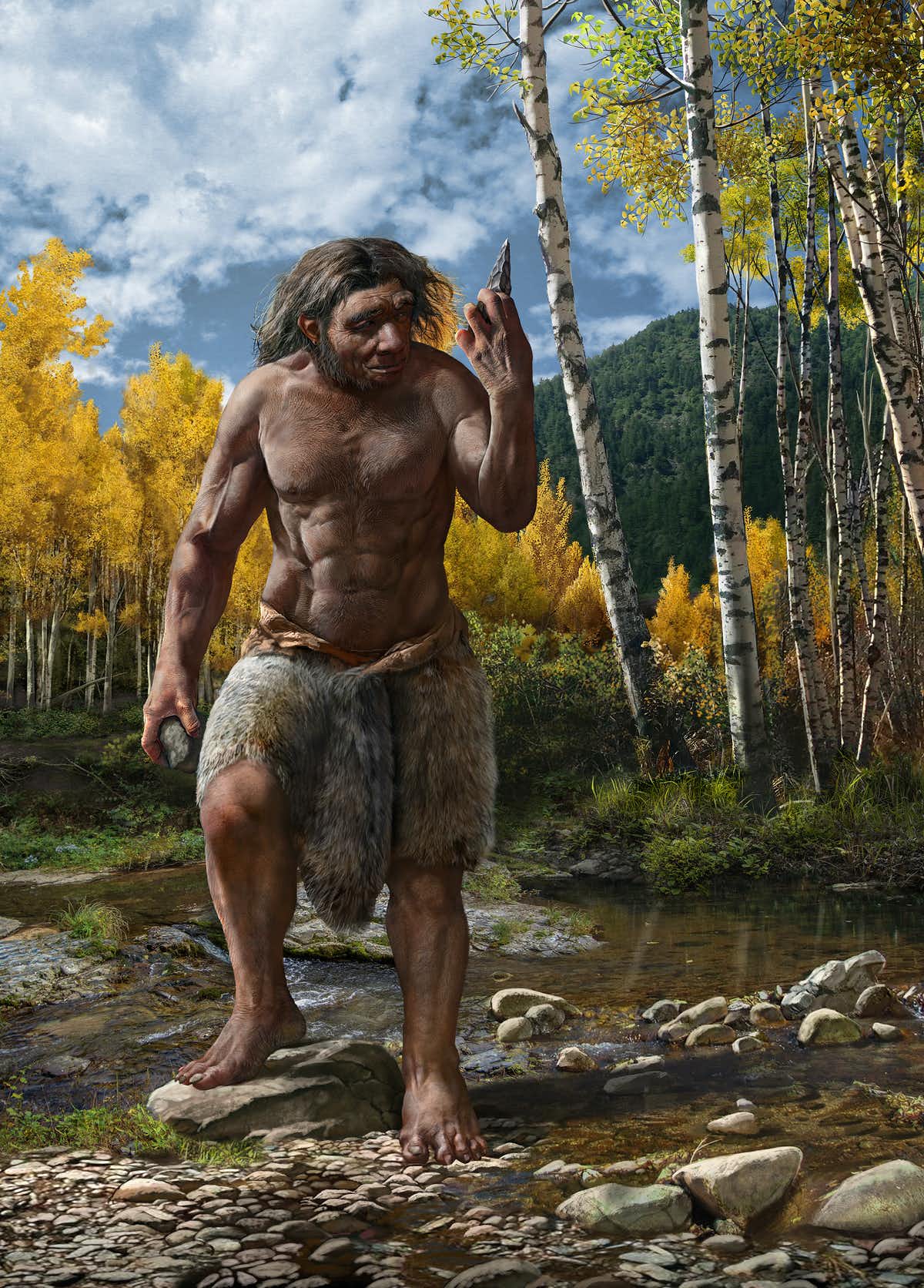 While the shape of the family tree presented here is likely to stand the test of time, it is still too early to accept these predicted divergence dates as definitive. That said, the research also sheds important light on how human species occurred and spread through the Middle Pleistocene – into all areas of our planet. Crucially, many of these species may have interbreed.

Europe was the origin point for Neanderthals. Meanwhile, the Asian human species Homo erectus was a critical evolutionary step, giving rise to all later hominin species. And now we know that Homo longi evolved in Asia too. It therefore looks like Africa was a destination as well as a point of origin for the spread of human species.

The Harbin cranium also tells another story about human evolution as a science and as an international discipline. Human evolution was originally a European area of interest, focused on evidence from sites in western and central Europe. The discovery of fossils in Africa added great time depth to the origins of the human lineage and led to a common story of the spread of new species out of Africa.

The Harbin cranium reminds us of the vast expanse of Asia, whose fossils and scientists are now coming to the fore. Further insights may come both from the discovery of new species and old figurative art.

In the case of the Harbin cranium, it is the application of new techniques of analysis that has brought old specimens back into active use. Asia is now in the driving seat of the study of human evolution.